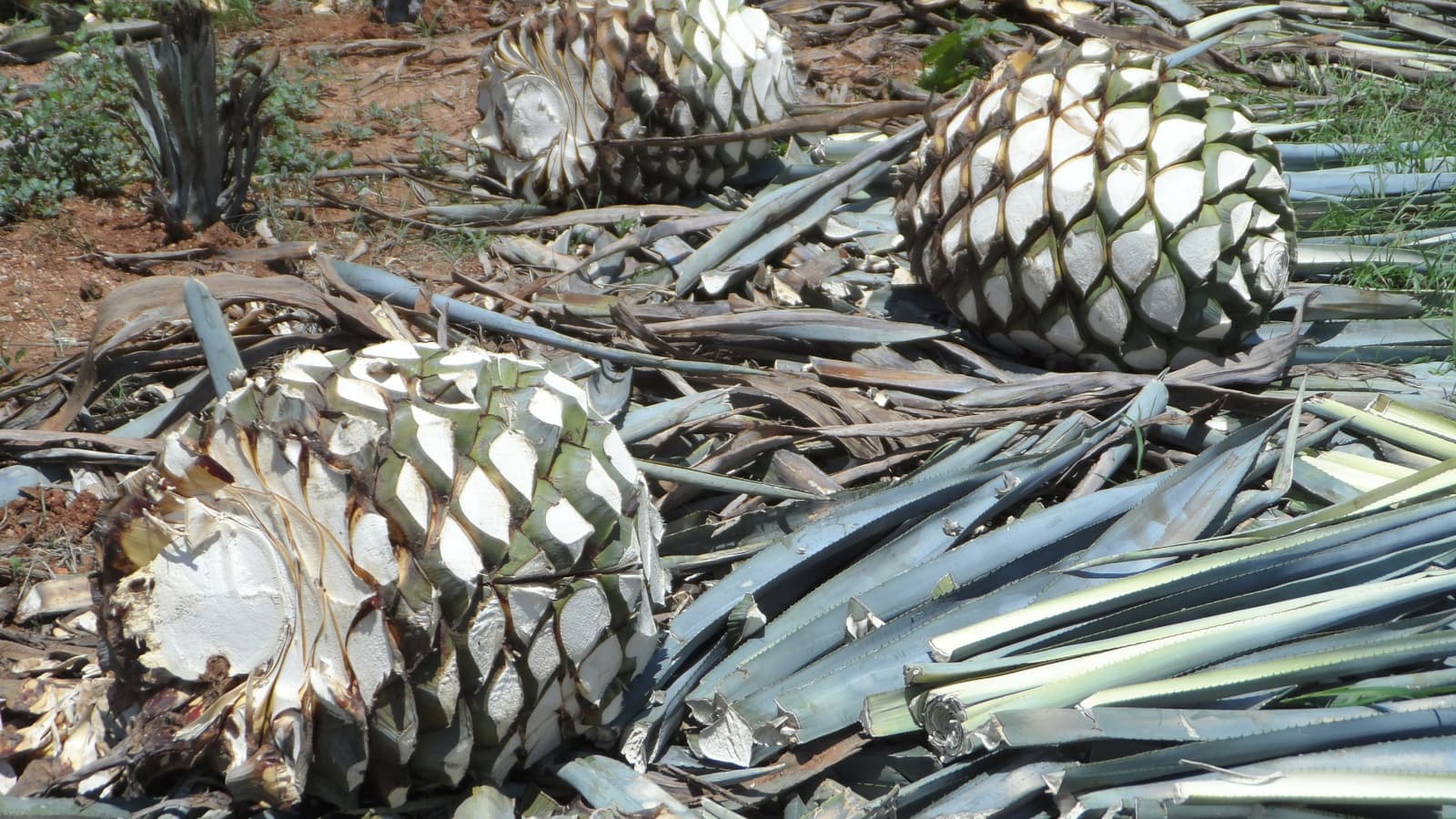 In this post, we talk about the specifics of tequila in terms of agave, terroir, harvesting and baking.

Even though mezcal shows more range and variety than tequila, tequilas can also be distinguished on the basis of their terroir [2-94]

In Jalisco, a distinction is made between the areas around Tequila, Amatitan and El Arenal. There, black, volcanic soil predominates, and the agaves are usually harvested after 6 to 10 years. [3] In the highlands, on the other hand, in the areas around Arandas, Zapotl, Gonzalena, Tepatitlan and Jesus Maria, red, ferruginous soil predominates. The agaves contain more sugar or starch, and the harvest usually takes place after 8 to 12 years. [3] The agaves differ due to the terroir.

As an example for the lowlands, we mention the valley of Amatitán. There, the land is basically depleted by agave cultivation, but there are areas where this is not the case. It is said that the tequilas from there are more herbaceous and, due to the volcanic soil and the hotter and more humid climate, often more mineral and earthy than tequilas from the highlands. The agaves ripen faster due to the warmth and humidity. [2-79] [15]

The highlands, called “Los Altos” in Spanish, are known for their red iron-rich soils. Tequilas from this region are said to be richer, fruitier and more floral than those from the Amatitán Valley. There are greater temperature differences, and due to the overall cooler and drier climate, the agaves here grow larger, sweeter and ripen more slowly. [2-79] [15]

The hearts of the Blue Agave weigh between 20 and 40 kg, but can also weigh up to 100 kg. [4] The sugar content of the agave hearts must be at least 24% when harvested and is higher in the highlands than in the lowlands. [8] [9]

Due to a shortage of wood in the state of Jalsico, local mezcal producers began baking agave hearts in more efficient, larger, above-ground industrial ovens instead of earth ovens from 1850 on. This used less wood and most of the producers in Jalisco converted their baking process in the 1880s and 1890s, the last conversion being in 1920. This new process changed the taste of tequila, as the smoke flavours were missing. Thus, tequila split off from mezcal as its own subgroup.[1-17] [1-26] [2-59] [2-94] [11] [12] [13]

So the agaves for tequila production were traditionally baked using earth pits. Then, in the early 20th century, brick ovens were used as standard. A few decades later, autoclaves replaced the ovens, and diffusers soon followed. [2-59] [2-60] [3] [4] [5] [13]

The autoclave was originally developed to sterilise objects and is now used in the tequila industry like a large pressure cooker. It works very efficiently because agave is not only cooked in half the time, but also more evenly. However, there are also critical voices according to which the flavours produced by this process do not achieve the same complexity and richness as with the older methods. [1-17] [1-77] [2-27] [2-94] [13] [14]

However, a growing number of tequila producers use a more modern method, they use a diffuser instead of an autoclave. This completely eliminates the need to cook the agaves. Instead, uncooked agave hearts are shredded and the complex carbohydrates of the agave are broken down by hydrolysis. The latter is a process that uses steam, enzymes and chemicals, mostly sulphuric acid. The sugar produced during hydrolysis is extracted, diluted with water and boiled. One could say that the diffuser is used to make agave tea, so to speak. The advantage of the diffusers lies in their increased efficiency, because with them one obtains up to 20% more fermentable material compared to the autoclaves. [2-27] [2-142]

After baking, the agaves are crushed either mechanically in a stone mill, the tahona, or mechanically with shredders. This crushes the cell fibres and the juice that comes out is then put into fermentation vats for fermentation. [3] [4] [5]

Compared to shredders, using a tahona has one disadvantage: they are not very efficient. A shredder does the work in 5 minutes that takes a day with a tahona. [2-53]

But using the tahona has a decisive advantage: it leads to better flavours and better tequilas. The gentler pressing in the tahona gives the tequila a rounder, smoother taste because fewer bitter substances get into the juice. [2-53] So if you compare within the same distillery the differences between a tequila from the tahona and one from the shredder, the difference is staggering. From the tahona, the tequila becomes round and rich, whereas from the industrial shredder it becomes sharp and harsh. [2-123]