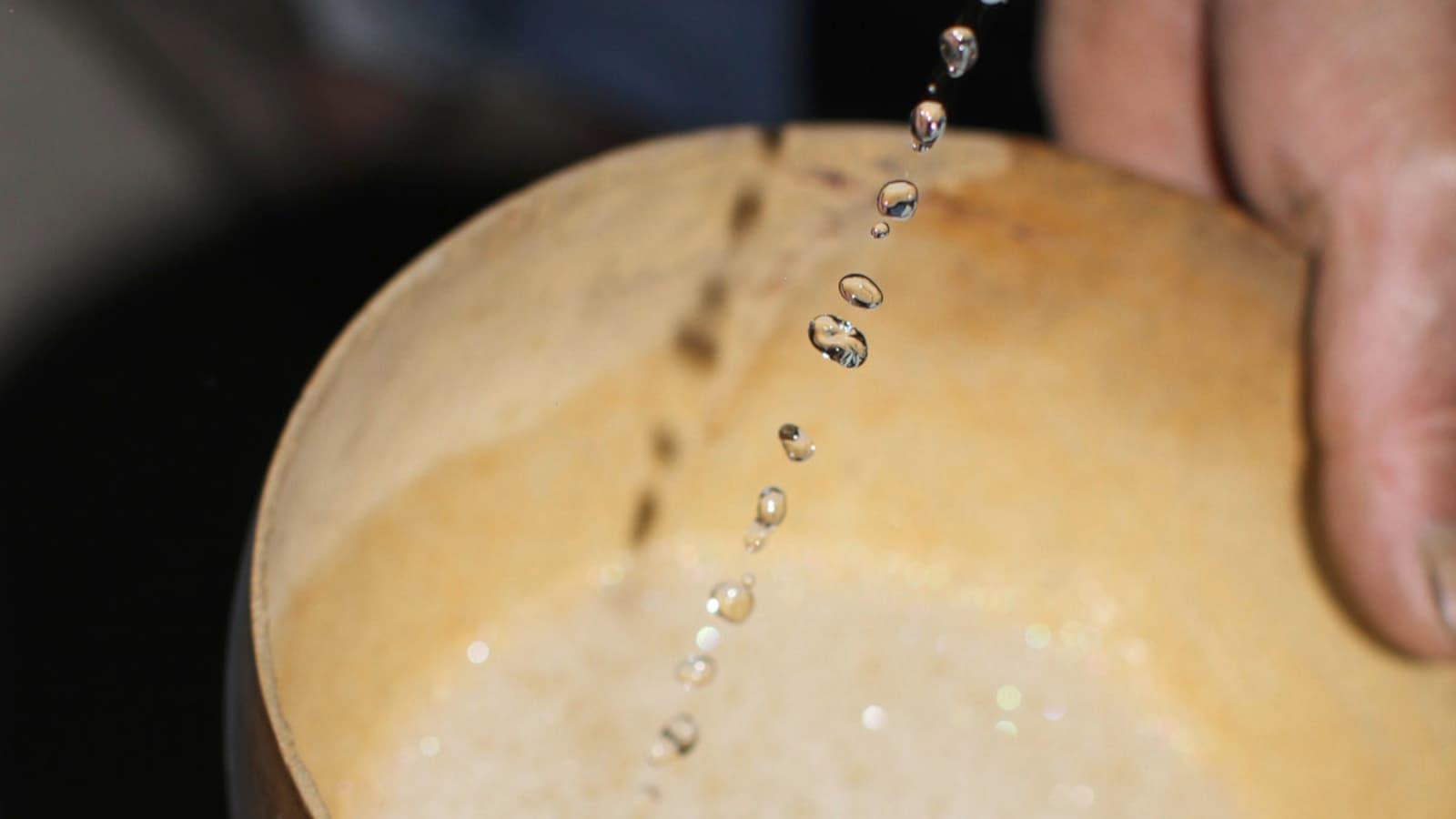 This post is about fermentation, distillation and ageing in mezcal, and about the “worm” that can be found in some bottles.

The pulp produced in the Tahona is put together with water into fermentation containers, which can be made of steel, stone, cement, clay, wood, plastic, or – very traditionally – animal skins. [1-41] [6] [14] [15] Water is added to reduce the sugar content. Optimally, the latter is 14-15%, otherwise the fermentation does not work. [6] [8]

Traditionally, fermentation is done by wild yeasts that are found in the environment. Fermentation takes place outdoors and in open vessels under uncontrolled conditions. The duration of fermentation varies and depends on various factors such as season, geography, temperature and humidity and can be a few days or several weeks. [1-41] [1-45] [2-24] [2-94] [7]

In contrast, for industrial production – we refer here to tequila production, which we will discuss in more detail later – cultured yeasts are used under controlled conditions. [1-41]

As with all distillates, the decisive factor for the aroma profile is when the pre-run and post-run are separated during distillation. Only the middle run is used. To make this separation, however, the mezcalero usually does not use any modern aids, but only his experience and his sense of taste and smell. [1-48]

In particular, he also uses the so-called ” pearls ” to determine the alcohol content during distillation. The pearls are the bubbles that form when the distillate flows into a container. During distillation, the mezcalero repeatedly checks the alcohol content with the help of a bamboo pipe into which he sucks some distillate and then puts it into a collecting container. The mezcalero usually determines the alcohol content with less than 1 vol% deviation on the basis of the foaming, i.e. the size and number of bubbles. The bubbles are optimally formed between 45 vol% and 55 vol%; outside this range they are small and disappear quickly. [1-50] [1-51] [2-96]

As with other spirits, the type of distillation apparatus used has a significant influence on the aromas of the distillate. Usually, mezcal is distilled in batches in small copper or clay pot stills.[1-45] Since mezcal production is not usually industrialised and automated, as is the case with tequila, the distiller’s handwriting remains intact, and different batches can understandably differ in taste. [2-95]

The clay pot stills are smaller than the copper stills, which hold about 100 litres, and are more common the further you get from Oaxaca and into more rural areas. Mezcals from clay pot stills usually have an earthy character. [1-45] [2-94]

After the last distillation, the mezcal is often stored and sealed in plastic containers, because before bottling, the distillate is tested in the laboratory and must be officially certified and released. [1-50] Unlike tequila, mezcal must be bottled at the place of origin. [2-102]

A special form of mezcal is the so-called “Pechuga”. For this, a twice-distilled Mezcal is usually distilled a third time, whereby fruits or nuts are also added to the still or a raw, cleaned and skinned chicken breast is hung into it, from which the name “Pechuga” is derived, after the Spanish name for “breast”. Instead of a chicken breast, turkey breast, rabbit breast, venison and others can be used. Some mezcaleros make the pechugas after the first distillation to increase the presence of the agave aromas in the distillate. [1-54] [10]

Maturation in the barrel depends on the usual influencing factors, for example, on the type and strength of the charring of the barrel; on the spirit that was previously stored in the barrel; on the temperature and humidity in the warehouse; on the duration for which the mezcal matures in the barrel. Also, as usual, there is a loss of liquid during storage, on average 10% per year.[1-52]

There are people who reject barrel ageing for Mezcal. Yet this is nothing new. It is not known exactly since when mezcal has been barrel-aged, but tequila seems to have been barrel-aged since the 19th century. If we ignore the modern definition, tequila is a subset of mezcal, so it can be argued that mezcal has been aged for a long time. [1-137] However, it also seems that barrel ageing is not a common tradition for mezcal (we are not talking about tequila now), [11] and it is said to have emerged only in the 1950s. [7]

Occasionally, and usually in bottles of bad mezcals, one finds the “worm”, which is not a worm but a larva. These infest agaves, and there are white and red specimens. The white ones are the caterpillars of a butterfly that lays its eggs on agave leaves. The red ones are larvae of a moth. [1-99] [3] [5] [7] [12]

There are various theories as to why the larva was originally put in the bottle. One says that it was an old Aztec tradition to determine the right alcohol content. It was said to guarantee the quality of the alcohol, as the caterpillar decomposes in bad distillates, but is preserved by the alcohol in good ones. Some say that the larvae were added to induce hallucinogenic effects. Others are of the opinion that it is not unusual to add the larvae to the bottles, since mezcal has been infused with all kinds of things for centuries, and in Oaxaca and elsewhere a wide variety of insects, including these larvae, have been eaten since pre-Columbian times. Another theory is that after the Second World War, the demand for tequila from the USA was too great for the producers in Jalisco to satisfy. Other Mexican producers then also supplied tequila. However, since the bottles were not labelled, importers wanted to know which ones came from Jalisco and which ones did not, and so the producers in Oaxaca started putting larvae in their bottles to label them that way. It is also said that larvae were first added to bottles in Mexico City to attract the attention of American tourists, which explains why the first bottles of mezcal to reach the USA all contained larvae. It is said that the larva was first added to mezcal in the 1940s or 1950s as a marketing gag by Jacobo Lozano Páez, who found that mezcal made from caterpillar-infested agave had a different taste. It is also said that the caterpillar was added at the beginning of the twentieth century to mask bad flavours caused by maggots that were cooked with it. [1-100] [1-101] [3] [4] [5] [7] [12]

Which of these theories is true, everyone may decide for themselves. However, it does not seem to be finally clarified, and everyone knows a different legend.

At this point, the “Sal de gusano” should also be mentioned. This is made from salt, from crushed, dried red larvae and from chilli peppers. In Oaxaca, Mezcal is supposedly traditionally enjoyed together with orange slices and this salt. The salt tastes hot and spicy and harmonises with the orange flavours. There is also salt with other insects, for example a grasshopper salt (sal de chapulin) and salt with black ants.[1-103] [2-110] [3] [5] At the Bar Convent Berlin 2016, we were able to taste these salts together with mezcal, and they really harmonise very well. So if you ever have the chance, you shouldn’t miss it. But we also read that these worm salts are not something traditional to be consumed together with mezcal. [7]