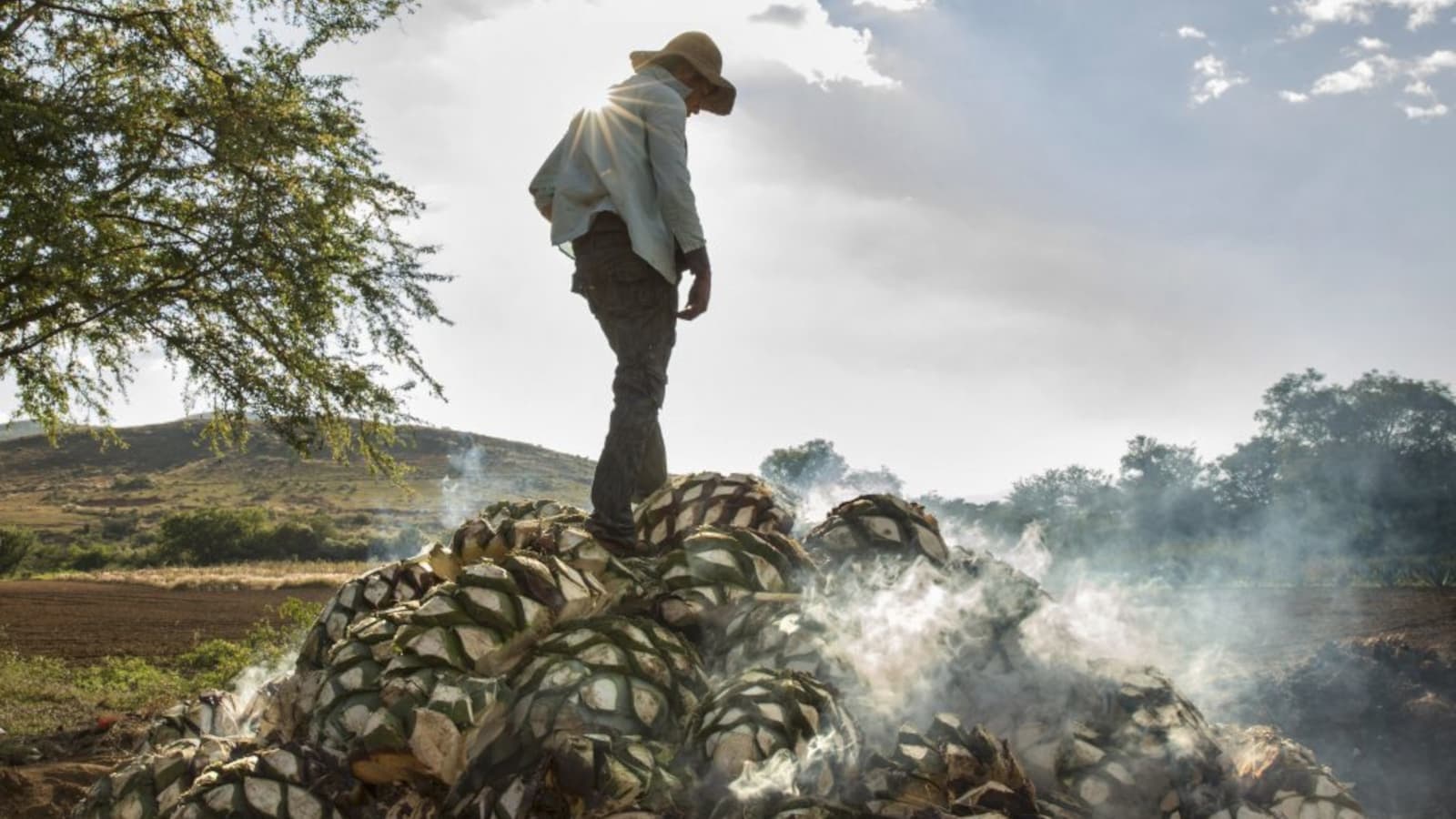 In this part of our series of articles on mezcal, we look at the influence of the agaves, the terroir and the harvest on the flavours of mezcal and describe how the agaves are baked before fermentation.

The influence of agaves on mezcal

The agaves used to make mezcal differ from each other, and so the mezcal takes on different flavours depending on the type of agave used. It can be spicy and strong, earthy and dusty, floral and fruity, or a combination of these. [1-55] At this point, however, we do not want to go into detail about the individual types of agave and their flavours; they are simply too diverse, and all produce wonderful and diverse mezcals.

But it is not only the agaves used that influence the aromas of a mezcal. There are also numerous factors in the production process that influence it. Even small deviations in the process lead to different flavours in the mezcal. [1-31] Furthermore, the terroir also has an impact on the distillate.

The term terroir was coined by the French as early as the 14th century. It is understood to be a combination of soil, climate, topography, sunlight, vegetation and humidity. Some even go so far as to say that the people who process the product and their years of experience in it are also part of the terroir. Although its existence is sometimes denied, there are many voices that confirm the influence of terroir. [1-31] [1-44] [2-77] [2-80] [2-81] [2-83]

In the case of mezcal, the effects of terroir are particularly pronounced. Not only because many different varieties of agave are used, but also because the agaves grow in different regions, from the deserts to the subtropics, from sea level to altitudes of about 3000 metres. The associated climate has an influence on the growth of the agaves and thus on the aromas present in the mezcal. [1-30] [2-81] [2-82] The terroir also includes the bacteria and yeasts present in the air, which influence the fermentation of the mezcal. [1-31] [1-44] [2-77]

As soon as the agave reaches maturity and can be harvested, it forms an inflorescence that can grow up to 13 metres high. The formation of the inflorescence draws starch from the heart of the agave. However, this starch is needed in the production of mezcal, because it is converted into sugar during the baking process. Since one wants to have as much of it as possible, the inflorescences of cultivated agaves are mostly cut off. [1-32] [2-36] [4] [5] [7] [10] [12]

The timing of the harvest affects the mezcal. If the agave is harvested before the inflorescence is formed, the mezcal is likely to be bitter. Some even leave the inflorescence for one or two weeks before cutting it off, thinking that this will make the mezcal sweeter. After removing the inflorescence, the agave can be harvested within weeks or even after a year. The season also plays a role in harvesting. Harvesting is seldom done in the rainy season, because then the agave heart swells with water and so the yield is lower. [1-34] [4] [6] [7] [12]

Due to the size of the agaves and their sharp-edged leaves, harvesting the agaves is not always easy. [2-xiv] The agave leaves are cut off with a wooden stick with a flat edge, so that only the heart of the agave remains. Depending on the type of agave, this can weigh several hundred pounds – as in the case of the Espadin agave. One harvester can harvest over 100 agaves per day. [1-32] [2-xvii] [12]

How agaves are harvested has a significant impact on the flavours of the final product. Some distillers prefer the agave to be cut close to the heart, leaving only the heart itself. This harvesting method is called “rasurada” (shaved). Others prefer it when a small bit of green remains on the heart. This method of harvesting is called “larga”. The fibrous leaves can add bitterness and complexity to the final product. Some producers prefer it when the harvested plant has just reached maturity. Others insist on waiting as long as possible to harvest until the agave is practically overripe. At this point, the leaves begin to wither and wilt, and a dark red sap that looks like blood begins to run from the hearts. This sap tastes sticky and bitter, but when cooked it turns into sweet caramel. [2-34]

A short note should be given beforehand, as one can often read that the agaves are cooked or baked. This means the same process each time, because cooking means in a narrower sense the heating of a liquid to boiling point, but also the cooking and preparation of food in general, regardless of the method of preparation, such as baking, roasting or grilling. [13]

In the production of mezcal, the harvested agave hearts are baked in earth pits. The choice of how the agave is cooked is decisive for the aromas of a mezcal. Especially in the case of artisan mezcal, this is done in earth pits, just as it was done hundreds of years ago. The resulting smoke gives the mezcal its typical aroma. Other methods only became available at the end of the 19th century and were used for the subcategory of tequila. They no longer use earth pits there, and we will go into more detail later. [1-17] [1-34] [11]

The design of the earth pits varies from manufacturer to manufacturer. They are dug into the ground, usually conical in shape and 3 to 4.5 metres wide at the top. [1-35] [4] The size of the pit determines how many agave hearts can be baked at the same time and how much time is needed. These factors influence the flavours of the mezcal. But the shape of the pit also has an influence. There are special designs to save firewood and to cook agaves with indirect heat, which makes them bake more evenly and less smoky. Some pits are lined with volcanic rock to better retain heat. Where this is not done, the agaves are in direct contact with the earth. [1-35] [4] The latter means that the pits become less hot, the baking process slows down and the agaves absorb earth flavours. [1-36] The type and amount of firewood also has an influence on the flavours that develop. For more sustainability, many mezcaleros (those who make the mezcal) also use the fibrous leaves of the harvested agaves to fuel the fire of the earth pits. Some producers also fire their pits with gas. [1-36] [4] [9]

As soon as a fire is burning at the bottom of the pit, stones are usually placed over the fire and after a few hours they are red hot. After the fire has reached its peak, the agave hearts are placed in the kiln, either whole or cut into quarters, depending on their size, and either directly on the stones or protected by a damp layer, which can be, for example, crushed agave leftovers from fermentation and distillation or even burlap or other fibrous materials. This layer protects the agaves from the direct heat of the stones. [1-36] [1-38] [4] [9] [11]

The oven is then closed by covering the pit with a 30 to 60 cm layer of earth. Sometimes a small hole is left at the top of the oven through which heat can escape and through which water can be poured into the oven. This moderates the heat inside the oven and the resulting steam influences the cooking process. The agaves now bake in this oven for a few days or even a month, depending on the season, the weather, the agave hearts and the mezcalero. [1-38] [2-93] [4] [9] [11]

The agaves are baked until they are brown and caramelised. During the baking process, the starch contained in the agaves is converted into sugar. In the process, some agaves are charred more than others, depending on their distance from the heat source. The degree of charring affects the flavours of the mezcal. [1-36] [1-38] [2-94] [4] [8] [11]

The time that elapses before the baked agaves are further processed has an influence on the flavours of a mezcal. The agaves can be processed immediately after cooling or only after days or weeks. In the latter case, bacteria that have multiplied on the baked agaves change the flavours of the mezcal. It also makes a difference whether charred parts of the agaves are removed before further processing or not. [1-40]

In most artisanal mezcals, the baked agave is traditionally crushed with a beater or in a stone mill called a “tahona” for further processing. [1-38] [2-23] [2-94] [4] [8] This refers to a large stone wheel attached to a central axle and pulled within a stone circle usually by a horse, mule or donkey. [1-41] The wheel rolls over the baked agave and squeezes out the juice, which is collected in a round depression in the ground.

In industrial production, mainly for tequila, the agaves are mostly crushed with mechanical shredders. If a Tahona is used, it is moved electrically. [2-23] [2-24] This has an impact on the flavours, and we will go into more detail in the chapter on tequila.