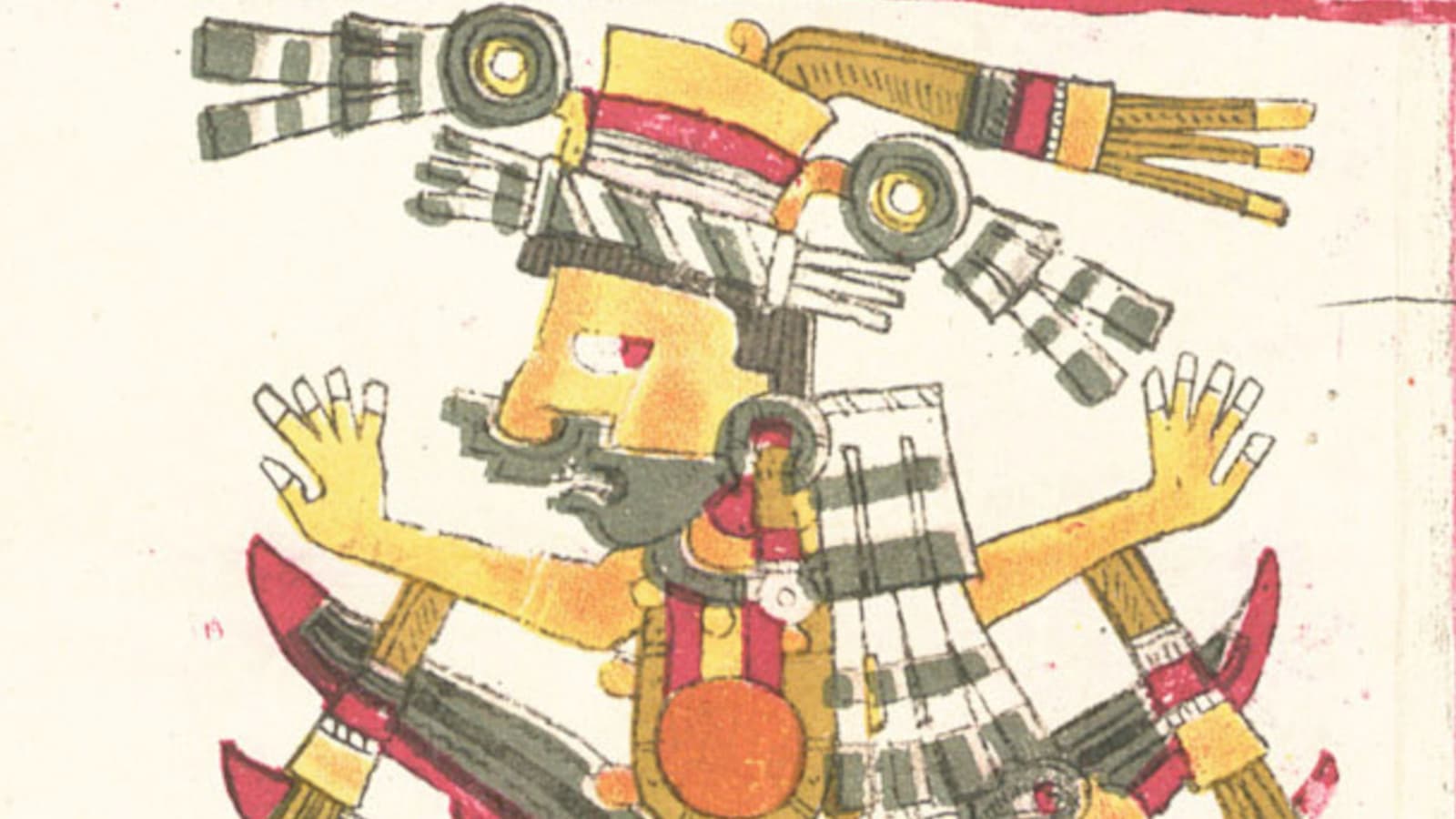 We are dealing with mezcal and its varieties, including tequila, in a multi-part essay. This introductory part is about Aztec mythology and the agave in general.

In the context of this small treatise we want to deal with spirits from agaves.

The Agave in Aztec Mythology

Agaves have long been an essential part of mythology and culture, nutrition and housing, healing and spirituality in Mexico. There is a view that the name “Mexico” also refers to agaves. It is said to come from Nahuatl, an Aztec language, and is made up of “metl” (agave), “xictly” (navel) and “co” as a locative and thus means “the place of the agave navel” or more freely translated “the place where the centre of the agave is located”. Many use the word “maguey” to refer to the agave, and not only in this context. From our point of view, however, this is misleading – at least when it comes to pre-Columbian times and Aztec languages – because “maguey” as a designation of agaves originates from the Greater Antilles and the word was only imported to Mexico by the Spanish. [2-xiv] [3] [7] [14] [15]

But now to what this post is actually about: the spiritual significance of the agave in Aztec mythology. There, Mayahuel is the goddess of agave and fertility. She had 400 children with Patecatl, all of whom were pulque gods and are called “Centzon Totochtin”, which translates as “400 rabbits”. It is said that each of these 400 rabbits represents a different type of drunkenness, and that one of these rabbits indwells you when you drink alcohol, depending on the type of drunkenness you have reached. [1-19] [1-20] [8]

There are many legends about Mayahuel and about the agave, but the most beautiful is the following: Mayahuel’s grandmother, the malevolent goddess Tzitzimitl, lived in the sky with the stars and devoured light. One day, the god Quetzalcoatl scaled the sky with the intention of killing Tzitzimitl and found the sleeping, beautiful Mayahuel. In the form of the wind god, he caressed her with gentle breezes so that she woke up. Both fell in love with each other and fled to earth. When the grandmother discovered this, she was furious. She searched the world for both of them, but Mayahuel and Quetzalcoatl always managed to escape and hide again. Their love for each other finally grew so strong that they were able to transform themselves into a forking tree. But Tzitzimitl found them anyway. She tore the tree in two and split it in half. Mayahuel was killed in the process and Tzitzimitl took Mayahuel’s trunk and threw it to the demons that followed her. But the enraged Quetzalcoatl snatched the remains of his beloved from them and buried them. Wetted by the tears he shed at her grave, the first agave grew from Mayahuel’s bones. It is said that its nectar, sweet as honey, is Mayahuel’s blood and ensouled by her spirit. “So with every sip we drink a piece of the heart of a goddess“, as Bettina Kupsa put it in a nutshell.[2-4] [6] [9] [13]

The name “agave” is derived from the Greek word “agavos”, which can be translated as noble, magnificent and sublime. [1-22] [5] [10] [16] Agaves are succulent plants of the asparagus family. Their classification in botanical taxonomy is apparently not entirely straightforward, and so agaves have often been reclassified and have, for example, also once belonged to the lily family. [1-17] [1-22] [2-4] [2-5] [3] [4] [6] [16] The natural range of agaves extends from the southern USA to northern South America. [10] [15] [16] Agaves grow best at altitudes between 1200 and 2400 metres and become larger in the cooler and rainier highlands than in the warmer and drier lowlands, where they become smaller but grow faster. [2-xiv] [15] [16]

Some agave species only need three to four years to reach maturity, while others need up to 50 years. [1-29] [2-96] [15] [16] When it matures, it develops an inflorescence. This is a long stem that grows out from the centre of the agave and grows up to 13 metres tall, depending on the agave species. [1-32] [2-8] [15] [16] At dusk, the flowers open, emitting a strong, musky odour and are pollinated, for example, by long-nosed bats of the species Leptonycteris nivalis, by hummingbirds or by moths. The bats also eat the flowers and seeds, thus spreading the latter. [2-36] [6] [15] [16] [17] [35] Once the agave has flowered, it dies. [2-5] But most agaves reproduce not only sexually, but also by small, genetically identical plants that arise on the mother plant. [2-36] The exception to this rule is, for example, the Tobala agave. Like other agaves, it reproduces sexually but does not form offshoots. [2-96]

Agaves vary in size and appearance. For example, the Blue Agave grows over 3 metres tall and wide, with hearts that can weigh 200 pounds and yield around 15 litres of tequila, while the Tobala agave remains small and yields only one litre of mezcal. [1-57] [1-58] [2-xiv] [2-44]

There are probably more than 200 species of agave, most of which grow in Mexico. Many are not suitable for consumption because they do not contain enough sugar, are too fibrous or are poisonous. It is not known how many species are suitable for human consumption and for the production of mezcal. The figures vary between 25 and 100, partly because of the many dialects and languages spoken. An agave species that grows in one place has one name, but in another place the same agave species is called something else. Also, two agaves may be genetically identical but differ in appearance and taste depending on the climatic and local conditions under which they grow. Thus, agaves of the same species not only have different botanical names, but also different local names. Even botanists do not agree on how an agave species is defined. The transitions are fluid and unclear. [1-22] [1-57] [1-83] [1-87] [2-5] [2-97] [3] [5] [12] [15] [16] [18]

Agaves have been consumed by humans for at least eleven thousand years, some sources speak of nine thousand. They were an important source of carbohydrates and other essential nutrients. Archaeological evidence suggests that they were mostly roasted over a fire and only sometimes eaten raw. [1-21] [2-5] [3] [14] [18][20] As finds in New Mexico and northern Mexico show, for at least four thousand years agave has been roasted in the same way as it is still done today in mezcal production, in covered earth ovens. This converts starch into sugar. [18] [21] Not only the agave hearts were consumed, but also the blossoms and leaves. [2-5] The juice of the cooked agave was boiled down to make sweets. [18]

So it is not surprising that agaves were domesticated early on. Many pre-Columbian peoples in Mesoamerica cultivated a wide variety of agaves, and the Indians of the Hohokam culture in Arizona also cultivated agaves on hundreds to thousands of acres of land. [2-22] [11] [12] [18] [19] However, the cultivation of agaves was not only important to pre-Columbian peoples. For example, the sisal fibres produced from the sisal agave were an important natural fibre in the 19th and 20th centuries. [22]

One would think that the baking of agaves is a method used only in Mexico, but this is not the case. We found it interesting to learn that a tribal group of Apaches in the southwest of the USA are called “Mescalero Apache”. This name comes from the Spanish, who called this group so since the 1550s. The latter lived between the Rio Grande and the Pecos River as far as New Mexico and southern Texas. Neighbouring Apaches called them Nadahéndé (also Natahéndé or Natagés), which translates as “mescal people” or “people who eat mescal”, because agave was a staple food for the Mescalero. They preferred to eat the roasted heart of the plant and, especially in winter, the food stocks built up from it were essential for survival, serving as their only food for weeks. As generally described before, they used the agave in many ways, for example for needles, as fibres for weaving, as a drink and medicine. [23] [26]

However, other Indian tribes, such as the Yavapai in the southwest of the USA, also traditionally consume agave. [24] [25]