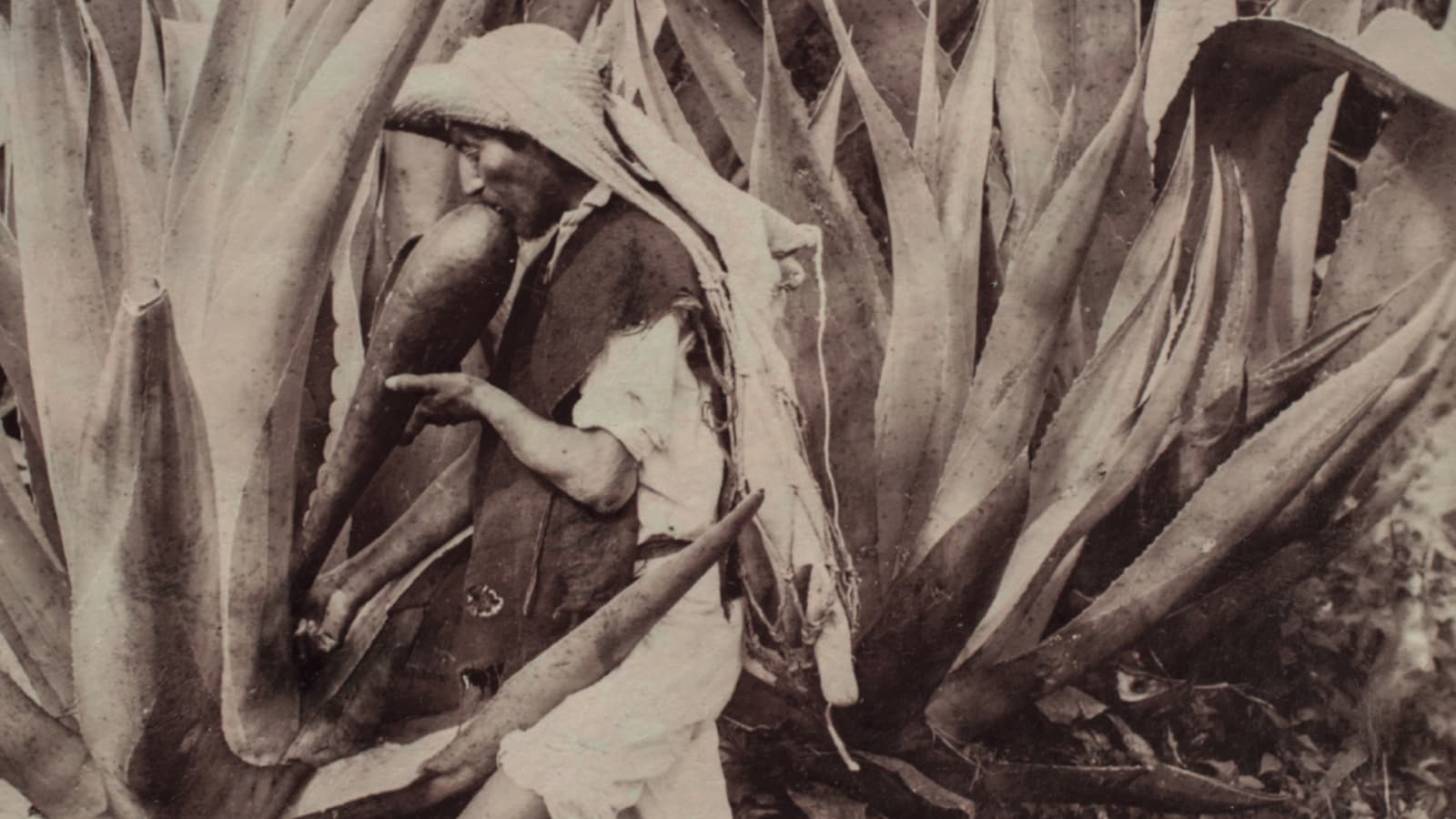 Anyone who deals with mezcal and tequila should also know about pulque, the fermented agave juice with a tradition that goes back thousands of years.

Pulque was consumed more than 2000 years ago, but not as a drink for the masses. It was considered sacred and usually only high priests and tribal princes were allowed to drink it. It was believed to be a way to communicate with the gods. Exceptions were only made for older people who were ill and needed the healing powers of the pulque. Pregnant women and nursing mothers were also allowed to drink pulque. In those days, drunkenness was seen as something divine, and was therefore not something that was appropriate for anyone at any time. Exceptions were made at special religious ceremonies and on holy days, when pulque was given out to everyone, otherwise public drunkenness was punished. [1-23] [2-xv] [2-8] [3] [4] [5] [7] [11] These holy days were the Aztec “Days of the Dead”, which were at the end of the Aztec year and lasted five days. On these days, the common people were allowed to drink themselves into unconsciousness. [11]

Pulque was associated with the Centzon Totochtin, the Four Hundred Rabbits, which represented the four hundred ways of intoxication. And so pulque was drunk at religious festivals dedicated to the god Ometochtli, whose name means “Two Rabbits”.[2-6] [4]

But not only Aztecs knew a drink made by fermentation. For example, the Apaches and the Tarahumara made a drink similar to pulque from plants of the Dasylirion genus, which is also used to make sotol. [4] [10]

Pulque is the oldest of the agave drinks. In pre-Columbian times, the production process was developed as it is still used today: First, a ripe agave is sought and found that is large enough for a person to crawl inside. The inflorescence is cut off to prevent flowering and to keep the nutrients concentrated in the agave heart. [2-6] [3] After cutting a hole in the agave heart, the sap is traditionally extracted using a long, hollowed-out and dried bottle gourd that serves as a tube. Today, empty plastic bottles are also used to collect the juice. After between three and eight litres of juice have been collected per day, the sticky substance that has formed in the hole is removed to produce more juice. The opening of the hole is covered with a piece of agave leaf to keep bugs and other unwanted crawlers away from the sap. [2-7] [3] [4]

Pulque is made from the collected agave juice by letting it ferment. Unlike tequila or mezcal, however, the agave juice (or rather the agave) is not cooked before fermentation. The more sugar the juice contains, the better the fermentation. Depending on the weather conditions, fermentation usually takes five to twenty days. The result, pulque, is a thick, milky liquid with an acidic, yeasty taste. The alcohol content of pulque is between 3 and 8 vol%, so it is comparable to a beer. However, while beer is fermented by yeast, pulque is fermented by the bacterium Zymomonas mobilis, which is naturally present on agaves. [1-19] [1-23] [1-80] [2-7] [4] [6] [7] [8]

Sometimes pulque is also infused with fruits such as pineapple, guava, celery or beetroot, following a custom dating back to the 16th century. [2-7]

One can find various indications of which agave species are used to make pulque, but they are very imprecise, ranging from four to more than ten agave species. The Blue Agave, from which tequila is made, is probably not one of them. The sisal agave, on the other hand, is also used to make pulque. Although pulque is produced all over Mexico, the centre is north of Mexico City, where the states of Hidalgo, Tlaxcala and Estado meet. [1-81] [2-5] [4] [9]

Origin of the name Pulque

The name “pulque” is also derived from the way pulque is made. It is probably a term originating from the Spanish, modified from Nahuatl, in which “octli poliuhqui” roughly translates as “that which spoiled”, or in other words “that which fermented”. [2-9] [4] [11]

Although the Spaniards did not like pulque as a drink, preferring wine and brandy instead, they saw it as a way to collect taxes. Taxes were levied from the mid-17th century, but monitoring whether taxes were paid was difficult. [2-9]

Pulque production was commercialised by the Spanish. Most of the production was managed by Jesuits who had already been in the country for 200 years. They built large estates where agave was grown. The quantity of pulque produced was large, the main customers being Indians and mestizos who could not afford European spirits. In the middle of the 18th century, for example, more than 50 million pounds of pulque officially came to Mexico City every year. However, one may assume that a large amount of pulque was also smuggled into the city on top of this. Nevertheless, taxes from the sale of pulque were one of the most important sources of income for the government. [2-9]

Pulque was very popular, but fell into disrepute due to an anti-alcohol campaign at the beginning of the 20th century, considered a drink of the lower class, and was subsequently displaced by beer. Although alcohol was generally considered something bad, pulque in particular was reviled. The Mexican upper classes preferred distilled spirits, believing them to be more modern and hygienic. In the meantime, however, pulque has lost its bad reputation and is drunk with pride, especially by young, independent and educated Mexicans, as a sign of Mexico’s pre-Columbian culture and history. People celebrate the past and thus show their protest against the older generations who appreciate the foreign and imported. Today, pulque accounts for 10% of the alcohol consumed in Mexico. [1-23] [2-9] [2-11] [4]