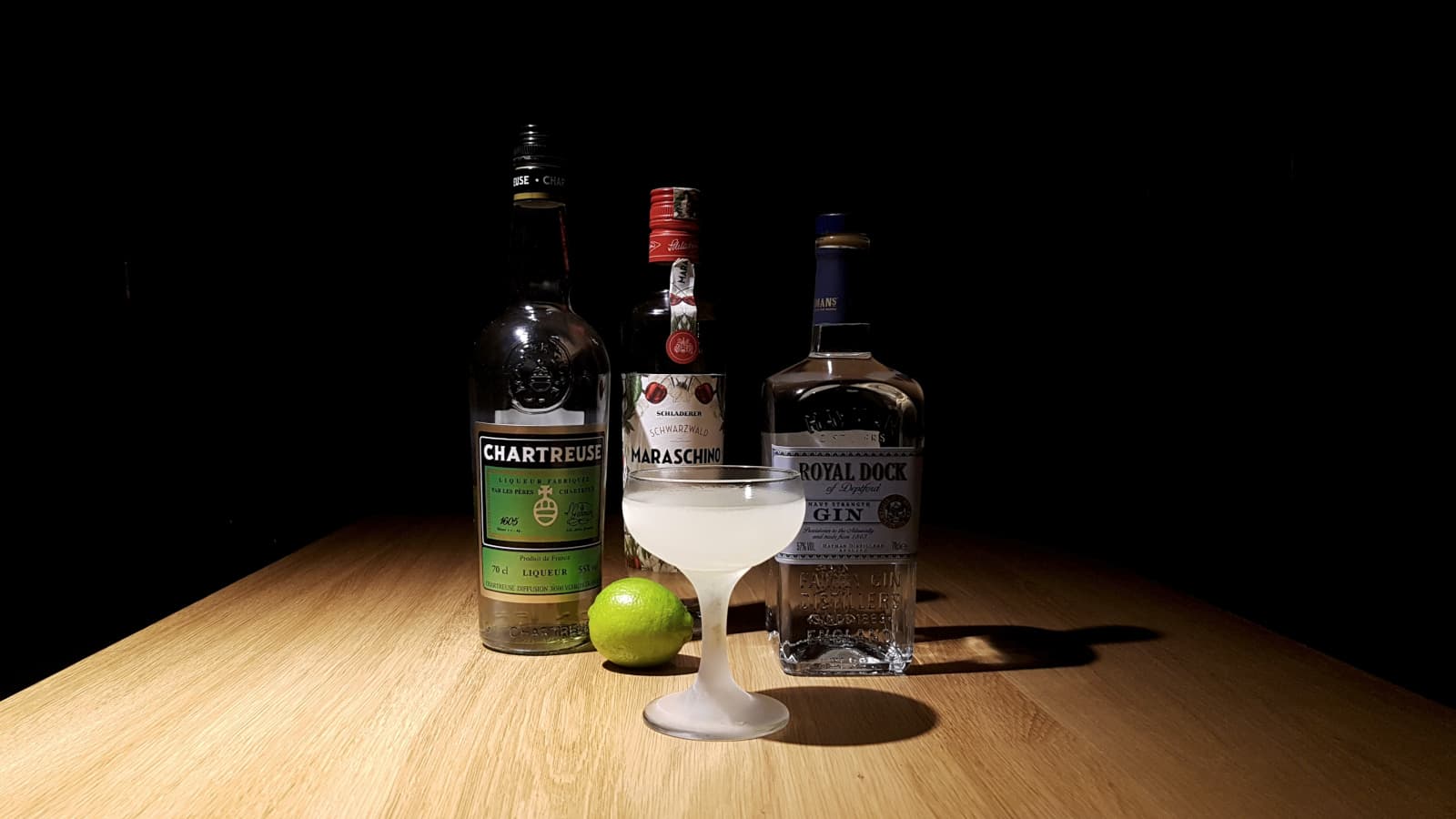 The Last Word is an extraordinary drink. It combines ingredients that one would not expect to harmonise with each other: gin, maraschino, chartreuse and lime juice. But they complement each other perfectly.

The recipe for the Last Word first appears in Ted Saucier’s book “Ted Saucier’s Bottoms Up” in 1951. He claims that the drink came from the Detroit Athletic Club. He writes: „Courtesy, Detroit Athletic Club, Detroit “This cocktail was introduced around here about thirty years ago by Frank Fogarty, who was very well known in vaudeville. He was called the ‘Dublin Minstrel,’ and was a very fine monologue artist.”“

Frank Fogarty was a well-known vaudeville artist who was also called the “Dublin Minstrel”, which translates as “balladeer from Dublin”

Vaudeville refers to a genre of US entertainment theatre that was most popular around 1900 and consisted of a fast-paced assortment of mixed acts. [4] According to a 1912 newspaper article in The New York Morning Telegraph, Frank Fogarty was the most popular vaudeville performer. [5] [9] [11]

The Detroit Athletic Club was founded in 1887 to promote amateur sports and a clubhouse was built on Woodward Avenue. Henry Joy later felt that the wealthy tycoons of the automobile industry spent too much time in pubs on Woodward Avenue and that a club befitting them was needed. So in 1913 the club was reorganised. [8] [9] The new clubhouse of the Detroit Athletic Club was opened in 1915 on Madison Avenue. [3] [8] [9]

Ted Saucier’s statement is not the only reason to assume that the Last Word originated in the Detroit Athletic Club. Its first mention can be found on a menu card of the club from 1916. This menu was sent to all club members with the July/August issue of the club magazine. [1] [3] It is the most expensive “cocktail” on the menu at 35 cents. Unfortunately, it is not stated what ingredients it is made of or who invented it. But we may assume that it is “our” Last Word, anything else would be too improbable. Further research by the club has revealed no other mentions of the drink. [1] [3]

Frank Fogarty is known to have visited the Detroit Athletic Club. His only known visit to the Club took place two months after the Last Word was offered at the Club, in December 1916. This is reported in the January issue of the Club’s magazine. The Club’s founding member, Emory W. Clark, had invited Frank Fogarty to entertain the directors of the First and Old National Bank and keep them from talking business with his lively stories.” [1] [3] Although this was Frank Fogarty’s only known visit to the Detroit Athletic Club, he had already appeared in Detroit in 1914 and 1915, at events organised by the “Detroit Board of Commerce”. [3] There is no indication that Frank Fogarty was ever a member of the club, its employee or bartender. He must have met the Last Word while visiting the club and subsequently introduced it to New York. He mainly worked and lived there. He did not invent the Last Word. [1] [3]

The Last Word was never really known and was therefore quickly forgotten. It was rediscovered in 2004 by Murray Stenson. He found it in Ted Saucier’s book and put it on the menu of the Zig Zag Cafés in Seattle. [1] [2] [3] [5] [6] [9] [10] This would have been done not only because it was a good drink. Joaquin Simó, former bartender at Death & Co in New York and now co-owner of Pouring Ribbons, reports: „A decade ago, it was still a sign of a good bar if you had maraschino, if you had fresh citrus, if you had Chartreuse, if you had good gin. And if you could mix these ingredients in equal parts, that meant precision, which meant you were jiggering.“ [1]

The Last Word only became known again at the Detroit Athletic Club in 2009, when a Seattle newspaper contacted the club to find out more about the drink. Since then, the Last Word has been available at the club again, and they even named a lounge on the roof of the club after it. [3]

In the years following its rediscovery, the Last Word inspired numerous bartenders to develop their own variations of this drink. [1] [2] [10] For example, Phil Ward’s “Final Ward” and “Pete’s Word” or Hendrik Albrecht’s “Quemada Palabra“. We have also developed one, with mezcal and crème de cacao. We call it “Oaxaca’s Word” and report on it next week.

Courtesy, Detroit Athletic Club, Detroit
“This cocktail was introduced around here about thirty years ago by
Frank Fogarty, who was very well known in vaudeville. He was
called the ‘Dublin Minstrel,’ and was a very fine monologue artist.”
1/4 dry gin
1/4 maraschino
1/4 chartreuse
1/4 lime juice
Ice
Serve in cocktail glass.