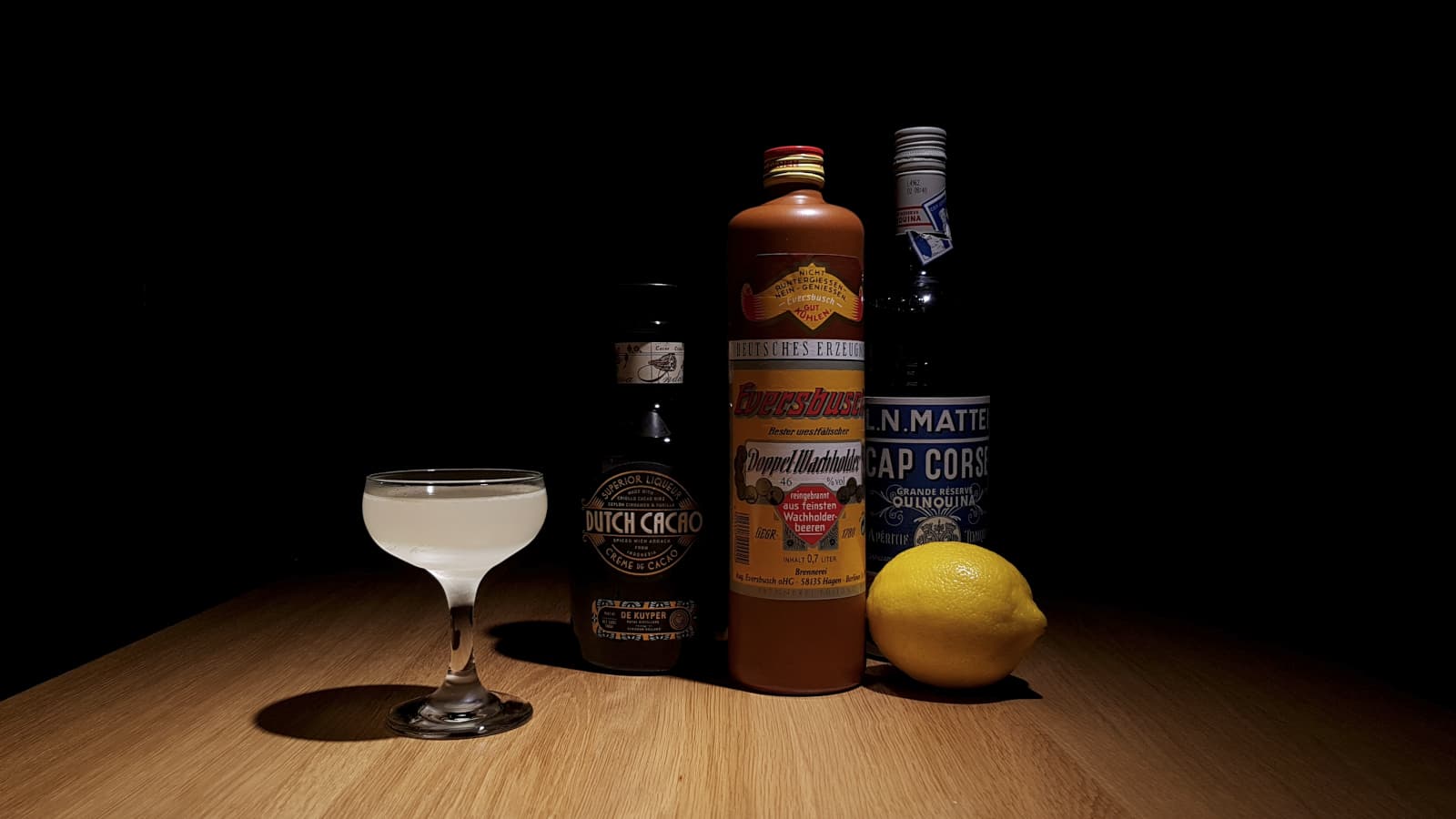 The combination of gin, cocoa liqueur, vermouth and lemon juice may not seem to go together at first glance, but the Twentieth Century is a true classic in which the flavours complement each other perfectly. This drink is exceptional: it shows us how art deco tastes.

Lillet is used in the original recipe. However, since the Lillet available today is now made with a modified recipe, it should be substituted. We have chosen the Quinquina from Cap Corse. As the Dutch Cacao contains little sugar, you have to add some additional sugar syrup.


This Twentieth Century was created by British bartender C. A. Tuck in or before 1937. In any case, the recipe first appeared in the “Café Royal Cocktail Book” in 1937.

Charles A. Tuck was Head Bartender at the Picadilly Hotel in London when he published his book ‘Cocktails and Mixed Drinks.’ in 1967. Interestingly, that was the year the Twentieth Century train stopped running. He writes about himself: »As for me, I have worked in many famous hotels in England and abroad. I started at the Carlton, in London, which was one of the most famous hotels in the world and which is no more. Later, I worked at the Semiramis in Cairo and then gained a great deal of experience all over Europe. I opened the Buttery Bar at the Hyde Park Hotel in London some years before the last war and when the war was over I opened a new Cocktail Bar at Flemming’s Hotel in London. In 1950 I went to the Piccadilly Hotel and have been Head Bartender there for a number of years. So much for my experience in the art of mixing drinks.« [6-11]

It should be noted that there are numerous other publications of several drinks with the same name from the years before. The oldest, from 1904, is a sweetened Old Tom gin with bitters and creme de noyaux. From 1913 onwards, the books understand the name to mean a bourbon sour with a shot of Jamaican rum, which is turned into a highball with ginger ale or soda. In 1934, the name is used for a gin Alexander, but we may neglect this as a curiosity. It was not until 1937 that the recipe appeared that is now commonly understood to mean a Twentieth Century Cocktail.

The drink is said to have taken its name from the Twentieth Century Limited, [2] a luxurious night train that ran between New York and Chicago between 1902 and 1967 and was considered the most famous train in the world, becoming a national symbol. [4]

One also reads that the variant from the “Café Royal Cocktail Book” refers to the Hudson locomotive J-3a. [3] From 15 June 1938, the train was operated with this locomotive as a streamliner, whose striking silhouette made it a popular art deco motif. The express train made the 1542 km journey in 16 hours at speeds of over 160 km/h. [4] Whether this relationship is really true remains to be seen. The recipe appeared in a London bar book in 1937, but the streamliner was not used until 1938 and advertised with a promotional graphic. [3] Nevertheless, the idea that the drink was inspired by this art deco streamliner is very charming, even if it is probably not true. Because the drink really does taste as Ted Haigh states in his book “Vintage Spirits and Forgotten Cocktails”: like art deco!

In the context of the Twentieth Century, one can ask what kind of crème de cacaos was originally used. Was it ‘white’, i.e. clear, or ‘brown’? In the ‘Café Royal Cocktail Book’, where it was first described, only ‘ Crème de cacao’ is given in the recipes of the book, and in the appendix it is written: “Crème de cacao. – A French liqueur, chocolate in colour, with the flavour of cocoa and very sweet.” – This means that in order to mix this recipe faithfully, you would have to use a dark Crème de Cacao. However, a clear Crème de Cacao already existed in the 19th century, as a glance at the books reveals. [9-311]

1904 May E. Southworth: One Hundred and One Beverages. Seite 27. Twentieth Century.

HAVE the glass thoroughly
chilled and put in a little
cracked ice; on this put one
teaspoonful each of sugar syrup and
orange bitters, five teaspoonfuls of
Old Tom gin, and five drops of
noyau. Stir with a spoon and
lastly squeeze in a drop of oil from
the lemon peel.

Juice of 1/2 lime
Juice of 1/2 a lemon
1 teaspoonful of sugar
100% Bourbon
1 dash Jamaica Rum.
Shake well and strain into a high-ball glass. Fill with
Ginger Ale or seltzer.

Juice of half a lime
Juice of half a lemon
1 teaspoonful of sugar
100% Bourbon
1 dash Jamaica rum
Shake well and strain into a highball glass. Fill with ginger
ale or seltzer.