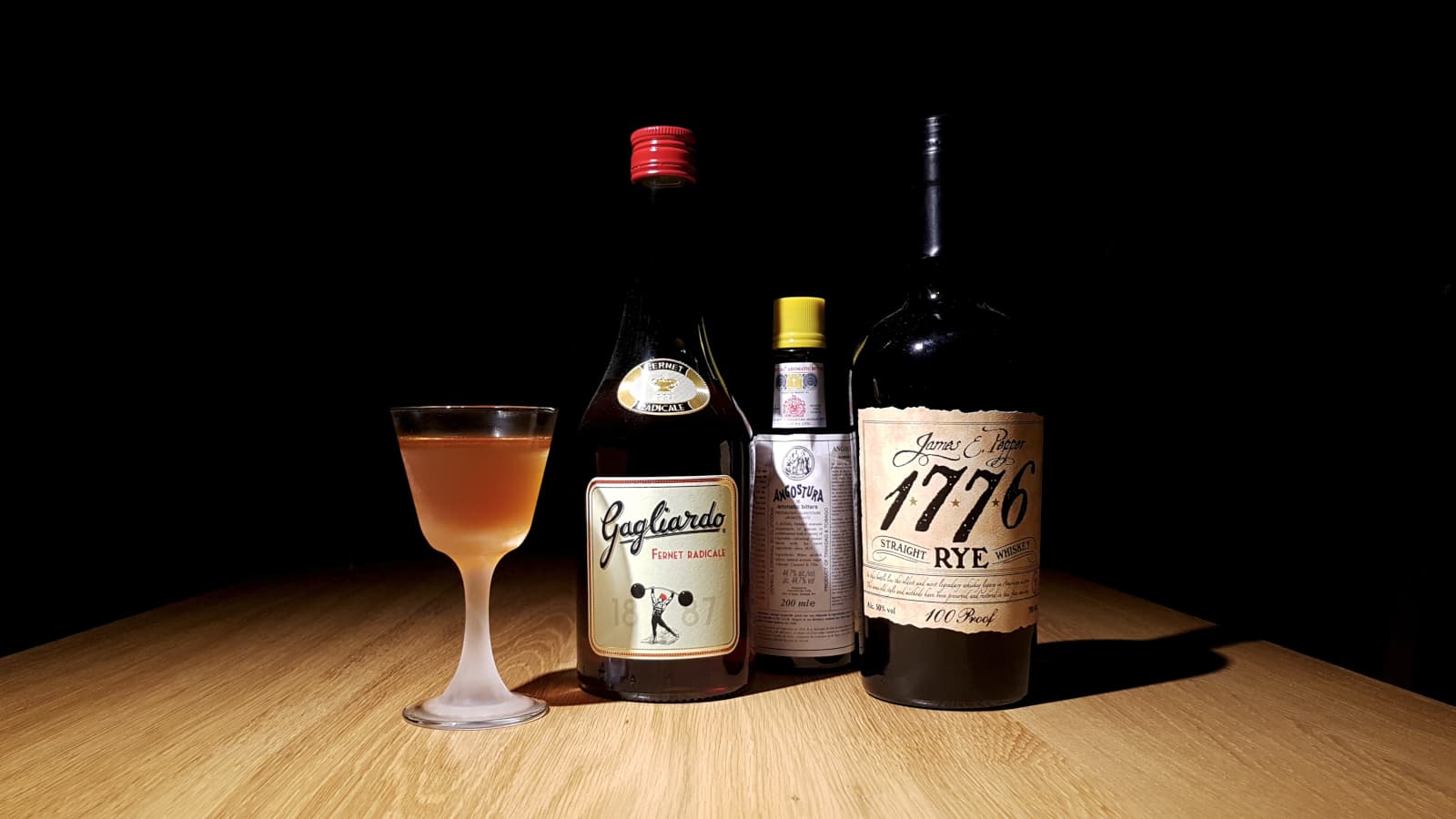 With the right fernet and a spicy rye, the Toronto becomes a delight. It originates from Toronto and was created before Prohibition.

We found the first recipe called Toronto in 1930 at William T. Boothby. It consists of 1/3 jigger each, i.e. 20 ml, of whiskey and fernet, to which are added 2 dashes of sugar syrup and 2 drops of Angostura bitters. However, this is similar to Robert Vermeire’s Fernet Cocktail from 1922. He uses 1/4 gill each, i.e. about 35 ml fernet and cognac or rye whiskey, 1 dash Angostura bitters and 2 dashes sugar syrup. Finally, he expresses a lemon zest over the drink. Robert Vermeire states that this cocktail is very much appreciated by Canadians from Toronto.

It should be noted, however, that Robert Vermeire is not the first to combine fernet with whiskey. Louis Muckensturm already published a similar recipe for a Marine Cocktail, but with far less fernet, and a recipe for a Fernet Cocktail which, however, also uses curaçao and does without other bitters.

However, the designation “Fernet Cocktail”, as used by Robert Vermeire, is not suitable despite the oldest rights to the name, as many different recipes were understood under this collective term. In 1924, Carlo Beltramo called the Toronto “Siki Cocktail”, but this name did not catch on. Nor do people really want to call this drink “The Mussolini” as Judge Jr. did in 1929. Finally, in 1930, William Boothby used the name “Toronto”, and it is under this name that we still know the cocktail today. Another name that can be found is “King Cole”. However, the latter contains too little Fernet in comparison or is even prepared with bourbon, as Hugo Ensslin did in 1917.

The published recipes use varying amounts of fernet. It is noticeable that practically all the more modern recipes use much less Fernet than rye whiskey. We clearly recommend not to do this. The Toronto loses what makes it special. The reason for this reduction may be that the drink seems unbalanced. We, too, did not find access with the most diverse fernets. Frank Arne in particular, as someone who is fundamentally sceptical about fernet and actually doesn’t like it at all, had a certain reluctance here. With the right fernet, however, the cocktail with equal parts fernet and whiskey turns out quite splendidly. Of course, it’s also important to use a spicy rye that has something to counter the Fernet. Frank Arne’s unequivocal comment on our recipe: under no circumstances should you use less Fernet.

So we took our cue from Robert Vermeire’s recipe. We think that no additional sweetening is necessary and that a lemon zest squeezed over it tends to make it worse, at least with the ingredients we use. So we have dispensed with lemon zest and sugar syrup.

Where exactly the name comes from is open to speculation. Robert Vermeire gives us a hint, even though he simply calls the cocktail Fernet Cocktail. He writes „This cocktail is much appreciated by the Canadians of Toronto“. [6]

From 1916 onwards, alcohol became increasingly difficult to obtain in Ontario, and therefore in Toronto, and eventually Prohibition was introduced, most of which was not lifted until 1927. [5] During the Prohibition era, both fernet and rye whiskey were certainly difficult to obtain in Toronto. It is now unclear whether the cocktail was already being drunk in Toronto and the recipe had then found its way to Robert Vermeire, or whether he meant by his remark that visitors to his London bar who came from Toronto particularly liked this cocktail. This question is raised again and again. Does a look at history help us to assess probabilities?

The first major wave of immigrants to Toronto came from Ireland in the 19th century. The Irish made up more than half of all residents in 1851. From 1900 onwards, other ethnic groups came to Toronto, including in particular Germans, French, Italians and Jewish immigrants from Eastern Europe. [2] It is perhaps also interesting to note that Toronto became the largest centre of distilling in North America. In the 1860s, “Gooderham and Worts” was the largest whiskey factory in the world. [2]

A Fernet cocktail consisting of a combination of Rock & Rye Whiskey, some Fernet Branca and a dash of glycerine was first published by Louis Muckensturm in 1906. In the 19th century, a Rock & Rye Whiskey was a mixture of Rye Whiskey, rock candy and citrus. [3] [4] One can well imagine that Muckensturm’s Fernet Cocktail was well known in Toronto. Considering the whiskey production there, it is obvious that people drank whiskey, and one can also well imagine that due to the Italian immigrants, fernet also came to the city and was preferably drunk by them. So it is quite conceivable that they insisted on a higher proportion of fernet in the drink, and instead of a Rock & Rye they used a simple rye with a little sugar syrup and additionally the lemon oils sprinkled over the cocktail. This would plausibly explain why the Toronto Cocktail in particular was so popular in Toronto and finally received its name after this city.

We therefore interpret Robert Vermeire’s statement as meaning that the cocktail originated in Toronto and was very popular with the inhabitants there. If he had only meant the visitors to his bar, he would certainly have formulated it in this way, just as he writes, for example, in the case of the Bacardi cocktail: „This cocktail is in great demand in London“. Otherwise, he indicates where the drink in question comes from or is popular, for example for the Bamboo Cocktail: „This drink is very popular amongst the British residents in India“. As for the Cooperstown Cocktail, he tells us: „This drink is very popular amongst the cowboys in America“. For the Daiquiri: „The Daiquiri Cocktail is well known in Cuba and the Southern States of the U.S.A“. For the Dubonnet Cocktail: „Another Cocktail made with Dubonnet which is very popular in London just now“. For the Handicap Cocktail: „This cocktail is well known in Dresden“. We will dispense with further examples. For the given ones already show that one cannot interpret his words in any other way than that the drink is much appreciated by the Canadians of Toronto: “This cocktail is much appreciated by the Canadians of Toronto”.

Take one dash of glycerine,
One dash of Fernet Branca, and
One cocktail-glass of Rock and Rye whiskey.
Fill the mixing-glass with ice; stir well and strain into a
cocktail-glass. Twist a piece of orange peel on top.

Take two dashes of Curacao,
One liqueur-glass of Fernet Branca, and
Two liqueur-glasses of Italian Vermouth,
Fill the mixing-glass with ice; stir well and strain into a
cocktail-glass.

1 dash of Angostura Bitters.
2 dashes of plain Sugar or Gum Syrup.
1/4 gill of Fernet Branca.
1/4 gill of Cognac Brandy, or Rye Whisky to taste.
Stir up well with a spoon, strain into a cocktail-glass, and squeeze lemon-peel on top.
This cocktail is much appreciated by the Canadians of Toronto.

NAMED after Il Duce and now
we know why!

1/2 Brandy or Rye
1/2 Fernet Branca
(Ask an Italian what this is!)
Sweeten with powdered sugar
Dash of Angostura Bitters

A modified Old-Fashioned is made with Fernet-
Branca, a bitters particularly well loved by Italians,
and is called Toronto.

This cocktail may be made in Old-Fashioned glasses
or may be stirred with large cubes of ice and strained
into cocktail glasses. In either case, decorate with a
twist of orange peel.