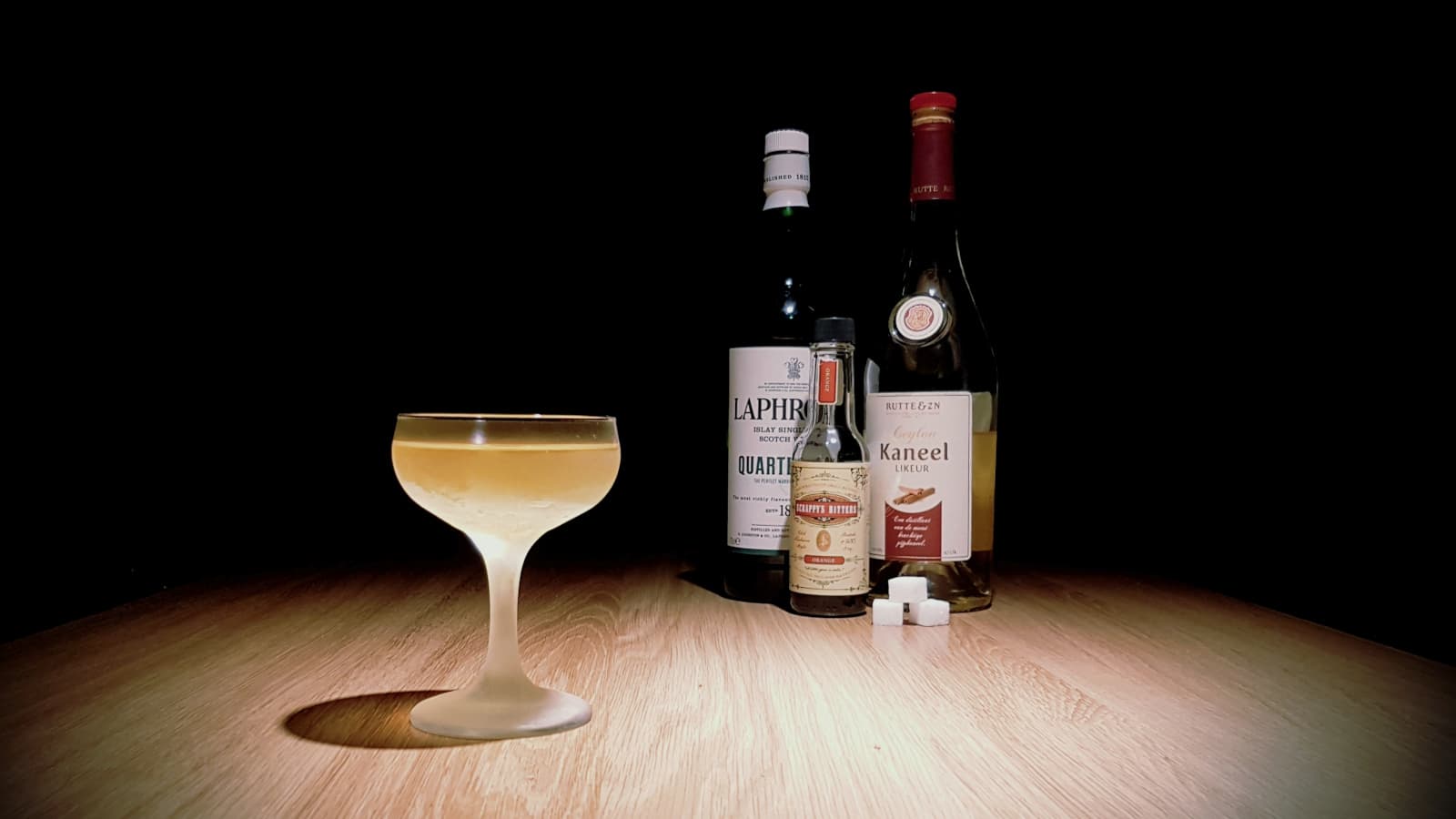 Peaty Islay whisky with cinnamon, orange bitters and a little sugar – that’s all you need for this 1860s-style cocktail.

The use of cinnamon in a cocktail is certainly not commonplace. But it does hark back to the origins of the cocktail.

We have already looked at historically interesting recipes in our post on the origins of the cocktail. In particular, William Terrington’s cocktail recipes from 1869 proved to be key to understanding the cocktail. His book not only lists recipes with ginger or chilli, but also a variant with cinnamon:

In other words, about 70 ml of whisky, 5 ml of bitters, 2 drops of cinnamon essence, sugar syrup to taste, 225 gr of crushed ice.

His whisky cocktail is basically something like an old fashioned cocktail, consisting of whisky, sugar, bitters, which is additionally flavoured with cinnamon essence. Unaware of this recipe, we developed the Peated Dutchman, and only later realised that it is a direct successor to that old recipe. We use much less bitters, in keeping with modern practice. Nor do we serve it on crushed ice; we do not interpret our cocktail as Old-Fashioned, but rather as its predecessor, the Whiskey Cocktail. Instead of cinnamon essence, we use cinnamon liqueur, and a little more of it, as the cinnamon aromas are probably less concentrated in it than in the cinnamon essence. But all in all, we follow the same basic structure. So the Peated Dutchman could well have existed in the 1860s.

It is true that ginger was originally used in the cocktail, as it was the eponymous ingredient. But the use of cinnamon may also have been common quite early, long before the publication of William Terrington’s book, because from 1795 onwards, Britain had gained direct access to cinnamon and held the cinnamon monopoly.

The story of its creation

From our visit to the Rutte distillery, we also brought back their phenomenal cinnamon liqueur. It is the ultimate cinnamon drink for all cinnamon lovers. On 5 May 2017, we did what we had been wanting to do for a long time, namely to look into what we could make with this liqueur.

Unfortunately, all the initial attempts did not convince us. With the obvious combinations like pear (Williams eau de vie), apple (Calvados) or sultana (PX sherry) we didn’t have a lucky hand. Suddenly Frank Arne said that we were probably on the wrong track. We would have to combine something completely different with it, something crazy, and he interjected, maybe something unusual like Laphroaig whisky. This idea, which he had just said without thinking about it – as he told me later – seemed very appealing to us. We love cinnamon and we love Laphroaig, so why not put the two together with a little orange? “Learning by doing” was our approach – and the result was very promising. As it turned out, his intuition was spot on.

In the weeks that followed, we tried and adapted every now and then. For example, we first shook with orange zest to release its oils in the drink, but we later decided to use orange bitters in a stirred cocktail. To make the cocktail more olphactic, we decided to use a cocktail bowl instead of a cocktail glass or tumbler. You can simply smell it better. Some sugar came into play, as sweetening only with the liqueur emphasised the cinnamon flavours too much. The recipe was finally ready in August 2017, and we haven’t changed it since.

Of course, this drink had to have a name – and naming is always a tricky business. In this case, however, it was quite simple, and we succeeded immediately the following week, on 12 May. We had a Dutch liqueur, because Dordrecht, Rutte’s home, is in South Holland. [2] It was in Dordrecht that the Netherlands declared itself independent from Spain in 1572, [2] and Dordrecht was an important port city until the 18th century, ahead of Rotterdam. [3] t is therefore natural to think then of the Golden Age of the Netherlands and the shipping associated with it. Laphroaig comes from an island, from Islay, and so in a way there is also a connection to the sea here, and its peat aromas are also very pronounced.

With this in mind, we spontaneously came up with “Flying Dutchman”. However, this name is already taken for another drink, and besides, it’s not quite appropriate. After all, where would the flying come from? “The Peated Dutchman” quickly came to mind, because the Dutch cinnamon liqueur is in a way enriched with peat flavours by Laphroaig.

So far, so good. But this story goes even further. It’s always nice when you can tell a good story about a drink. As further research has shown, the story of how the name was found is much more profound than what we have already told. The Dutch cinnamon monopoly plays a major role. This was held by the Portuguese in Ceylon (Sri Lanka) from 1520 until the Dutch took it over completely in 1658. This is the Dutch part of the name, so the Scottish or British part is still missing. Britain occupied Ceylon in 1795, and it was officially ceded to Britain by the Dutch in 1802. In the interior of the island, however, there was still the unoccupied Kingdom of Kandy, which is where the cinnamon was originally harvested. This kingdom was also conquered by the British in 1815, ending the rule of the Sri Lankan kings. From 1815, the whole of Ceylon was a crown colony. It was exactly in this year, 1815, that the Laphroaig distillery was founded. And so the Peated Dutchman comes full circle.

We have found a nice article that deals with the cinnamon monopoly in more detail. It comes from the book Kulturgeschichte der Nutzpflanzen by Dr. Ludwig Reinhardt, published in 1911: [4]

“Until the settlement of the Portuguese, who had regular traffic with the island since 1505, the cinnamon trade was a lucrative monopoly of the native kings, whose dynasty came from northern India and had ruled the Singalese since 543 BC. When the Portuguese seized the coast of Ceylon in 1580, they imposed a tribute of 125000 kg of cinnamon on the rulers in the interior and promised them Portugal’s help in return. Soon, however, they made themselves so hated that the King of Kandy called the Dutch to their aid. Philip II had already forbidden them to trade with Lisbon, so they tried to obtain the cinnamon directly. In 1596, the first well-armed Dutch merchant ships arrived in the Indian Ocean, and in 1632 the Portuguese began to be ousted from Ceylon, a process that was complete and permanent by 1658. Immediately, the Dutch made cinnamon their exclusive monopoly. …” [4-577]

“For a century, the Dutch derived a rich profit from the cinnamon monopoly, sometimes exceeding 7 million marks a year. Most of the cinnamon trees were in the territory of the King of Kandy. When the king was hostile, however, the revenue dropped significantly and only brought in about 1 million marks. In order to become independent of the whims of this ruler, a collector of the Kolombo district named de Koke proposed to the Dutch governor Falk in 1765 to plant the cinnamon tree on his own territory. At first the Great Council in Batavia rejected this proposal, but the advantages were too tempting, so that they finally agreed. The execution, however, was not easy. The chiefs claimed that cultivated cinnamon was inferior; at their instigation, the natives also opposed this innovation. Eventually, the Dutch government succeeded in its demands, but the natives secretly tried to harm the crops by pouring hot water on them or otherwise ruining the seedlings. Only draconian severity secured the enterprise. Any destruction of young plants was punished by cutting off the right hand. Soon the Dutch tried to cover the entire European demand with about 200,000 kg of cinnamon bark, which they obtained from their own crops, without having to make purchases of the harvest from the kingdom of Kandy in the interior of the island. They used violent means to ensure that the high prices of this drug were not depressed by overproduction. Above all, they limited the cultivated trees to a certain number and in blessed years had a part of the too rich harvest thrown into the sea or burnt. In the mother country, too, in order to make it impossible to depress prices, they burned off the abundant stocks; they would rather have worked in vain than lower the price of their goods for their own people. The Frenchman Beaumaré reported that in June 1760 he witnessed how cinnamon was burned for two days in a row at the Admiralty Building in Amsterdam – apart from nutmeg – for a total of about 16 million livres, which spread a delicious fragrance over the whole country.” [4-578]

“In 1795, during the war with the Dutch, the English, who lusted after their cinnamon gardens, occupied Ceylon, which was ceded to them in 1802 in the Peace of Amiens. They found the cinnamon crops in a flourishing state and, as heirs to the old rulers, exploited them in the same way as they had. The Anglo-East Indian trading company took over the highly lucrative monopoly and carried it on as the Dutch had intended. The first governor, North, even issued an ordinance that not only prohibited new plantations, but also restricted the number of cinnamon gardens that already existed. In 1815, after the removal of the native prince who had still ruled until then, the whole island came under the administration of the English Crown, which maintained the cinnamon monopoly until 1833, but then had to give it up, as the cinnamon tree had in the meantime been introduced by the Dutch to Sumatra, Java and Borneo and by the French on Isle de France (today’s Mauritius), Bourbon and in Cayenne, but without producing the excellent product as in Ceylon, which today still dominates the world market with its highly aromatic bark.” [4-578] [4-579]

Half a gill of whisky, one teaspoonful of
bitters, two drops of essence of cinnamon. Sweeten
with syrup add half a pound of pounded ice.

0 comments on “The Peated Dutchman”