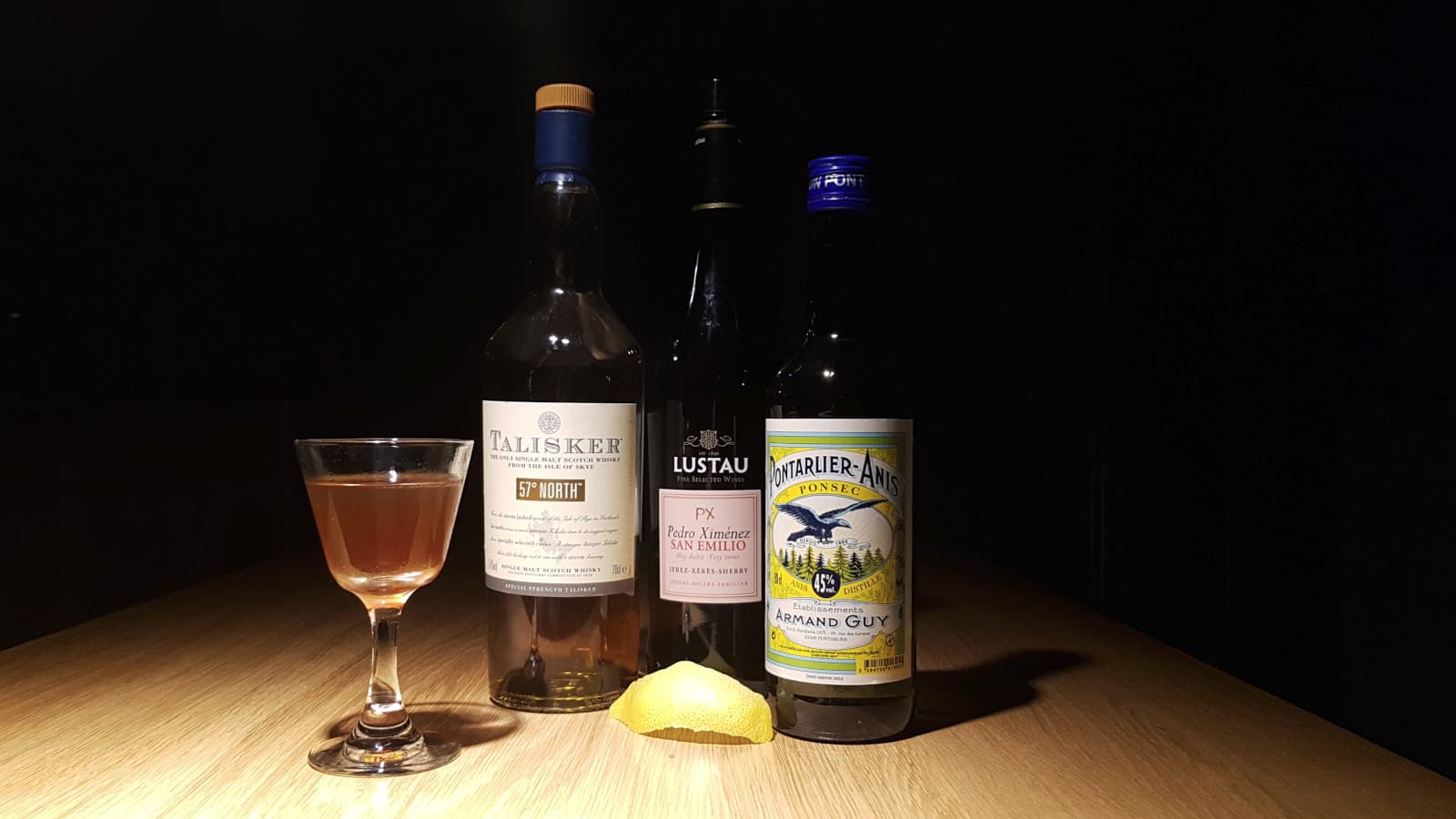 This is a modern classic for us. It is a twist on a Manhattan Cocktail or Rob Roy. Unlike most people think, however, it is not made with absinthe, but with a spirit related to it.


Preparation: Stirred, sprinkle with lemon zest.The Rapscallion was created by Adeline Shepherd and Craig Harper in 2007 at the Ruby Bar in Copenhagen. [1] [4] [5] [6] Adeline and her husband Rasmus opened the bar the same year. [6]

Initially, she prepared the drink with a Johnnie Walker Black Label. That changed, and today they use a ten-year-old Talisker in the bar. [6] It’s interesting that, independently of this, we also came to the conclusion that a Talisker is a great fit; we chose the Talisker 57°.

We have found some recipes that use other ingredients besides Scotch, PX sherry and absinthe, for example chocolate liqueur or maraschino. [2] [3] But this has only remotely to do with the original. As it turns out, there is a big misunderstanding. As the Ruby Bar assured us, the ratio was always 40 ml Scotch, 20 ml PX sherry and 2.5 ml Pastis. Absinthe is not and never has been used. [7] That this is generally accepted today may have to do with the fact that Jim Meehan used and publicised absinthe in his “The PDT Cocktail Book” published a few years ago, as there was no pastis in the USA. However, he neglected to note this accordingly in his book. So today almost everyone is of the opinion that absinthe should be in a rapscallion. [4] [7]

We tasted numerous variants beforehand and also tried them out ourselves. In fact, it turned out that absinthe is only the second choice. With a Pastis you get the more coherent result.

So let’s take a closer look at pastis in this context. Pastis is an aniseed-based spirit that originated in France. The basic ingredient was originally aniseed, but today star anise is mostly used. Other natural plant extracts or seeds are permitted as long as the aniseed flavour remains predominant. However, the spirit may only be called pastis if it also contains extracts of liquorice. Pastis is a relatively young spirit. In March 1915, not only was the production, distribution and consumption of absinthe containing thujone banned, but also the entire category of “aniseed spirits”. As a substitute for absinthe, Occitan farmers secretly produced a substitute for absinthe. The name of this substitute comes from the Occitan word pastís, or rather from the French pastiche, which means “imitation”. It was not until 1920 that various aniseed spirits were again permitted in France under certain conditions. [8] [9]

So what matters – also in Rapscallion – is first of all the aniseed flavour and then (secondarily) the liquorice flavour. When blending, we took the liberty of trying out a product without liquorice in addition to real pastis – with an even better result. In our opinion, the Rapscallion improves immensely without liquorice. We used the Anisée Ponsec from the Guy distillery in Pontarlier. This distillery had specialised in absinthe at the end of the 19th century, so the ban on absinthe was a serious blow for them. However, with the approval of aniseed spirits in 1920, the Guy family was able to produce something similar to absinthe again. The Ponsec we use is based on an absinthe, but lacks the wormwood. Ponsec was launched in 1921 and is still distilled exclusively from green aniseed and a few additional herbs. Since the beginning, no star anise has been used, because unlike star anise, “green anise is not dominant, acrid and numbing, but floral, light and spicy – just as we know it from absinthe.” – „ist grüner Anis nicht dominant, beißend und betäubend, sondern floral, leicht und würzig – eben genau so, wie man es vom Absinthe her kennt.“ [9] Markus Lion from Lion Spirits gave us the idea of using Ponsec instead of a pastis. As an expert for absinthe and related products, we had asked him, against the background of the Rapscallions , which pastis he could recommend as a standard mixing ingredient. He recommended Ponsec, because this anisée, which has been produced since 1921, is a herbal distillate that consists mainly of Andalusian aniseed, in contrast to most pastis that are mixed cold. It is a tasty anisée and is preferred to any pastis in the French Jura. We have to agree with him. It is an enchanting product for anyone who knows something about aniseed.

But now back to the Rapscallion. With the expertise that the Ponsec is preferred to a Pastis in the French Jura, we thought we should try it in the Rapscallion. The result convinced us immediately, and we therefore took the liberty of changing our recipe accordingly, knowing that one would actually have to use a Pastis. Well, just try it out and decide for yourself which variant you prefer.

According to the Diffords Guide, the bar’s menu describes the drink as „An unabashedly smoky, Scottish version of the Manhattan. Talisker single malt whiskey and stirred over pedro ximenez sweet sherry with a Ricard pastis rinse. A well-loved signature Ruby Cocktail“. [1]

When we asked about this drink, the Ruby Bar referred us to the Rapscallion article from “Cocktails of Copenhagen”, but told us that the recipe given there had to be modified and that only 2.5 ml of pastis should be used, otherwise the aniseed would be too dominant. [5] [6] [7] In this article, pastis is added directly to the stirring cup, and that’s how we do it, especially since this preparation method was mentioned by the Ruby Bar as a reference.

Rapscallion, by the way, means crook, scoundrel, scallywag. Jim Meehan gives us a hint in his book. In a side note he lets us know: “When this cocktail held a little more than promised, it got the name Rapscallion.“ [4]

The true story of how the drink came about is finally revealed by the statements of Adeline Shepherd-Lomborg and Craig Harper, whom we would like to let have their say in conclusion.

Adeline wrote to us on 25 September 2018: „The Rapscallion was originally created by Craig Harper, a good friend of mine who I worked with in The Hallion. A private club at the time in Edinburgh. I think in 2003. He made it with Johnny Walker as the base spirit. In 2005 I recreated it with Talisker for my menu at Ruby in Copenhagen where it became one of our biggest sellers. A Rapscallion is a rascal in Scots, which suits the sweet, smoky take on a Manhattan very well. I always thought it needed more peat, hence the Talisker and I knew it would be appreciated by the Danish palate which I found to be quite daring when I moved to Copenhagen.“ [10]


Craig wrote a bit more about the genesis on 1 October 2018: „So Adeline & I worked together at a lovely bar called Oloroso, named for the Sherry, which inspired us all to learn & experiment with the lovely fortified wine. I discovered & fell in love with PX Sherry, which I still adore & drink often now. I vaguely recall being filmed for something in Oloroso & mixing a then unnamed whisky & PX Sherry in Manhattan proportions. In 2003 Adeline & I opened a bar called the Hallion in Edinburgh, & we included the drink with JW Black, & a rinse of Ricard which we thought worked well with the smokeyness. Hallion is an old Scots word for Rascal, & Rapscallion means the same, which where name came from. After the Hallion I forgot about the drink until Adeline made it both better & famous at her bar Ruby. Talisker works much better & if I make it now, I use Adeline’s spec of 40ml/20ml & a rinse of Ricard. Finding it unexpectedly in the PDT cocktail book years later is one of loveliest things that’s ever happened to me industry.“ [11]