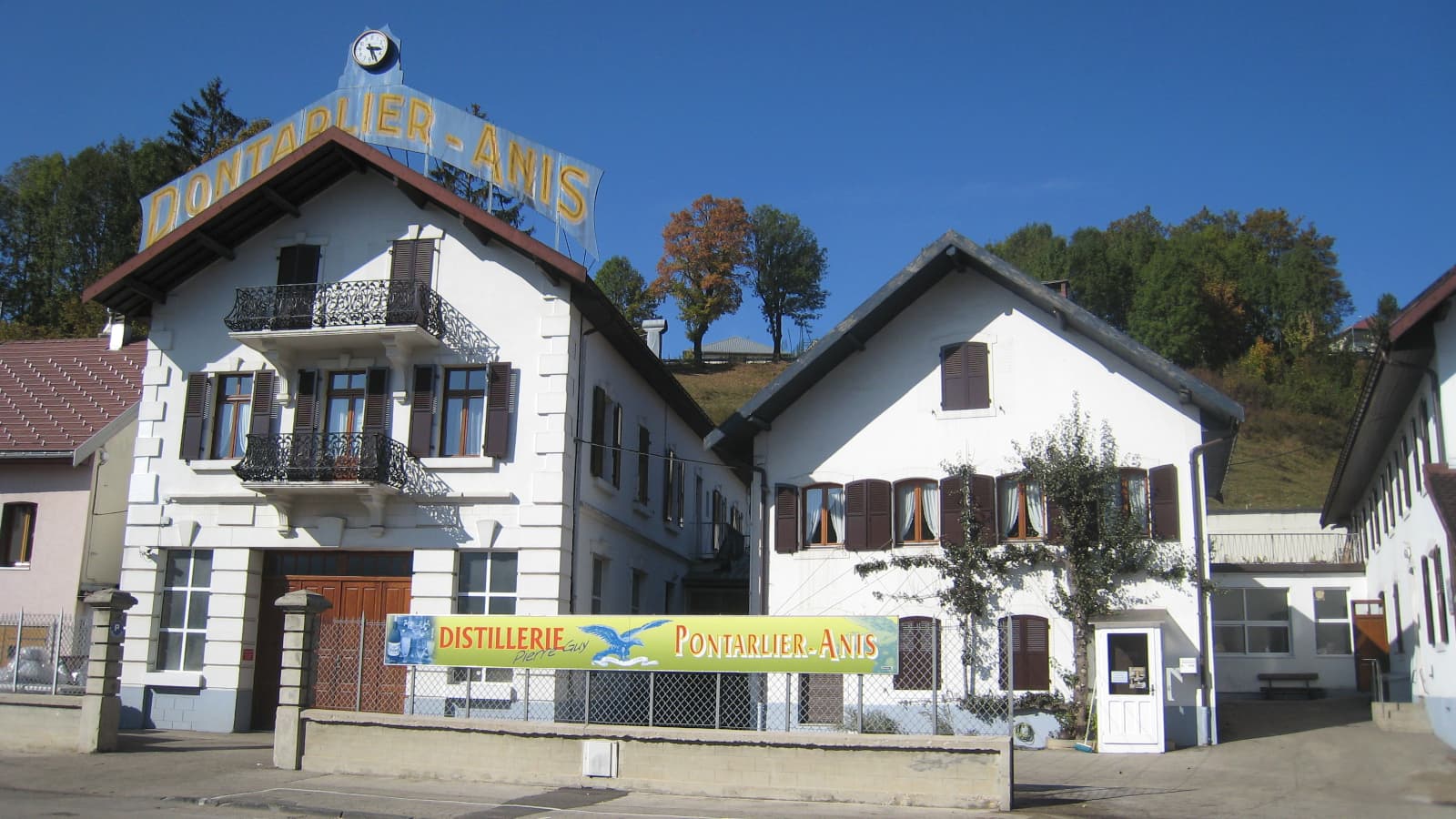 The Guy distillery is a traditional absinthe distillery from Pontarlier, a place closely associated with the history of absinthe. Not only absinthes, but also other interesting products are traditionally produced there. For us, a reason to introduce the distillery and some of its products.

Pontarlier is a small town in the French Jura, not far from the Swiss border. In the 19th century it was the centre of absinthe production. [1] To understand the history of the town, one must know that wormwood was used as a medicine in ancient times. Wormwood is the namesake ingredient of absinthe, and absinthe was first mentioned for Couvet in Switzerland, which is 30 kilometres from Pontarlier. It was developed by the French doctor Pierre Ordinaire, who lived in exile in Switzerland after the French Revolution. His recipe was acquired in 1797 by a Major Dubied, who then founded an absinthe distillery. Initially, only 16 litres of absinthe were produced there and most of it went to nearby France. To avoid customs formalities, Henri-Louis Pernod, the major’s son-in-law, moved the distillery to Pontarlier in 1805, where initially 400 litres were produced daily. [1] [6] [10]

In 1914, absinthe was banned. Absinthe production came to a standstill, and it was not until 2001 that absinthe began to be produced there again, not only by large corporations like Pernod, [1] [2] but also by small local distilleries like that of the Guy family. It is the only traditional absinthe distillery to have survived the ban on absinthe. In France, not only the production of absinthe was initially banned, but also that of all other aniseed spirits. The reason for this was the fear that absinthe could still be produced illegally alongside it. It was not until 1920 that aniseed spirits were allowed again under strict conditions. Thus, the distilleries of the time quickly ran into economic difficulties because they had no alternative products. It was different at the Guy distillery, because they were innovative and had developed other products that helped them through the difficult times. Today, the distillery is run by Pierre Guy. The art of absinthe distillation has been passed down from father to son in each generation. The distillery’s products were first brought to Germany by Markus Lion in 2003 and are still marketed by him today. [2]

The distillery was founded by Armand Guy. He had learned how to distil absinthe from Vichet, Pontarlier’s best-known absinthe distiller, and in 1890, at the age of 20, he opened his distillery in the Rue des Lavaux, because there was an underground water source available. [5] Those were golden times for Pontarlier, because there was a large market for absinthe. At that time, there were not only 23 absinthe distilleries in the small town, but also 150 bars and pubs. Of the 10,000 inhabitants, 3,000 were employed in absinthe production.[5]

In 1901, a fire destroyed the distillery. More than a million litres of absinthe flowed into the nearby river Doubs. The spring water of the Loue, which rises about 15 km away, then took on the smell and colour of absinthe, and since then it has been known that the two rivers are connected underground. [1]

Armand’s son, Georges, began working in the distillery after the First World War. From the age of 13, he helped his father in the distillery and learned the art of absinthe production from him, even though absinthe was forbidden at the time. So Armand passed on to Georges the same passion for this spirit. After absinthe was banned, aniseed-based aperitifs came onto the market as a substitute, and so Georges also developed an aniseed product in 1921, the “Pontarlier Anise”. [5]

In 1964, Pierre’s son François took over the management of the distillery. He was also the one who started making his great-grandfather’s absinthe again. It is also thanks to François that absinthe is legal again, because he campaigned for its legalisation for fifteen years from 1984. As a result of his efforts, the first decree was issued in France in 1988, regulating the permissible amount of thujone, fenchone and pinocamphone in spirits. The “Green Fairy”, as absinthe was also called, came back to France in 2001, but it was not allowed to be called absinthe until 2011. [5] [6]

The distillery’s absinthes are distilled according to traditional and authentic recipes that have been passed down from generation to generation, from father to son. [2] [5]

In addition, other products are also available. However, we do not want to go into all of the distillery’s products here, but limit ourselves to three that we liked very much. We are convinced that they have some potential and can be used well for mixing, even though we have not experimented much with them ourselves yet. However, as inspiration, we give a recommendation for each product on how they can be used. Two are from Markus Lion, one from a bartender to whom we had introduced the product and asked him what tasty things could be made with it.

Markus Lion is of the opinion that this is the best absinthe of the distillery. The absinthe brand “La Pontassilienne” already existed before the absinthe ban and was produced at that time by the famous distillery Vichet from Pontarlier. But with the ban, this brand and the distillery from which it came disappeared. After about 100 years, the brand was revived by Francois Guy. At first, he produced this absinthe only in 2011 for the Absinthiades, just as he created a new absinthe for each of the annual Absinthiades. The Pontissalienne won the gold medal in this competition in 2011 and continued to win numerous awards thereafter. It is still produced today. [2] [6]

The recipe for this absinthe is relatively simple, but all the more convincing for it. Fine Andalusian aniseed is combined with strong Jura wormwood, as has always been appreciated in Pontarlier. We also appreciate the clear structure of the absinthe that comes with it. Compared to other absinthes, its alcohol content of 56 vol% is not one of the strongest, but this has no effect on its quality. [2]

Markus Lion recommends drinking this absinthe with iced, still water in a ratio of 1:3 to 1:4. We opted for the ratio 1:3. But this absinthe is also very appealing and pleasant to drink neat.

In 1915, absinthe and similar products like aniseed spirits were banned in France. In 1920, however, aniseed spirits were allowed again with certain conditions. The Guy distillery used this permission to produce something similar to absinthe again. Ponsec, launched in 1921, is therefore based on absinthe, but lacks wormwood. Only green aniseed and a few selected herbs are distilled for it. You can taste this difference – other anisés often use star anise. Green anise, however, unlike star anise, is not dominant, acrid or numbing, but floral, light and spicy. The ponsec contains a little sugar to make it more harmonious and rounded. This is by no means wrong, however, and is also in keeping with the historical context. One of the conditions of 1920 was that sugar had to be added. [11]

The Ponsec differs from an anisée in that the herbs are not only macerated but distilled, and no liquorice is added, which means there are no liquorice flavours. [12]

We find this product very convincing and prefer it to any pastis in a Rapscallion, for example. As Markus Lion told us, Poinsec is preferred to any pastis in the French Jura. We have to agree with him. It is an enchanting product for anyone who appreciates aniseed.

The Verte Sapin was developed by Armand Guy in 1902. At that time it was still called “Le Vrai Sapin”, only later was it called “Le vert Sapin”. [5] [7] Armand wanted to produce an authentic, regional liqueur and decided to use the plant that grows everywhere there: the fir tree. [7]

For this fir needle liqueur, buds and young shoots are harvested at an altitude of about 2000 metres, taking care not to damage the trees by this process. Half of the harvest is dried under the distillery’s roofs, the other half is prepared in alcohol and distilled. The dried shoots are then added to this distillate and macerated for a fortnight. During this process, not only the aromatic, essential oils but also the green colour passes into the distillate. Additional colouring agents are not added. Sugar is then added and the alcohol content is adjusted to 40 vol%. The liqueur is reminiscent of the scent of a coniferous forest. [2] [7]

Originally, this product was sold in a wooden bottle, also designed by Armand Guy. It was made of hazel and pine wood, covered with black papier-mâché to make it look like bark, and decorated with lichen and moss. [7]

We are fascinated by this intense liqueur and are convinced that you can conjure up wonderful cocktails with it. Our blogger colleagues from Trinklaune [3] were also inspired and offer two suggestions. Markus Lion recommends it together with tonic water and a lemon as an aperitif. We followed his recommendation and prepared it as a highball. We found the result convincing. There are wonderful aromas, spicy, herbal, woody.

We have chosen the following formula:

Preparation: Serve in a highball glass with ice.

For this gentian liqueur, the roots of the wild gentian are dug up in the surroundings of Pontarlier at an altitude of 800 to 1200 metres, then cleaned with warm water and macerated in alcohol for eight to nine months. During the subsequent distillation, a few additional herbs are added, which also provide the colouring of the liqueur. Artificial colouring agents are not added. [2]

Gentian schnapps has been around in neighbouring Switzerland since the end of the 19th century. In the 1950s, George Guy came up with the idea of also producing a gentian schnapps from Jura gentian, as it was known for its intense, gentian-typical aroma and its pronounced bitterness.[2] Two generations later, in 1991, Francois Guy revived the production of this drink with the help of his father. It quickly found its lovers, and is traditionally served mainly before meals to stimulate the appetite. Markus Lion, for example, also recommends it as an aperitif with tonic. [2] [8] We, on the other hand, want to recommend it as an ingredient for a Martinez variant:

Where are the products available?

As a source of supply in Germany, we recommend Lion Spirits from Eschbach near Freiburg im Breisgau. The owner, Markus Lion, was the first foreign absinthe dealer to bring the distillery’s products to Germany in 2003. He has a long-standing business relationship and friendship with the Guy family.

0 comments on “Distillery Guy from Pontarlier”