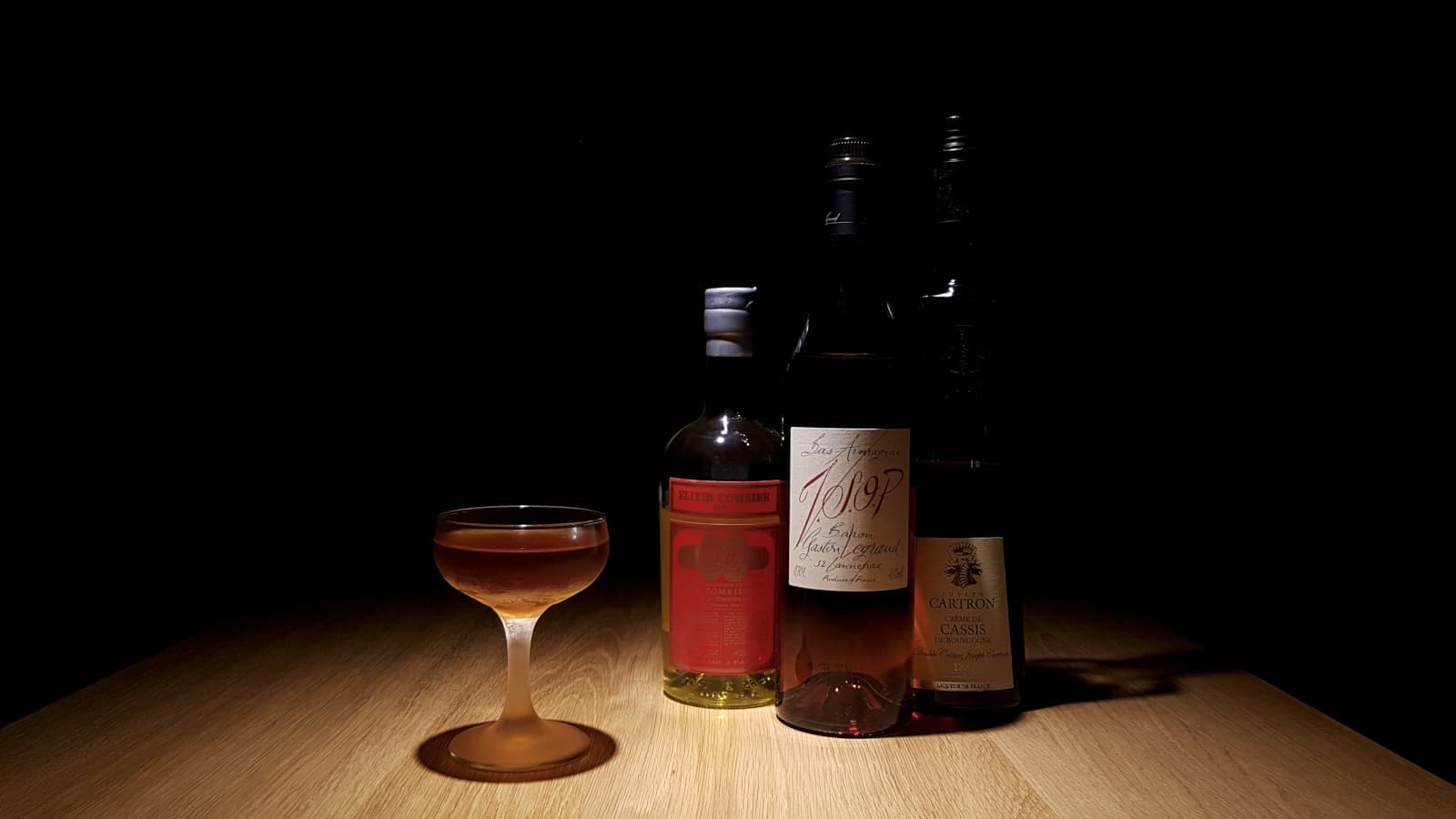 This drink is inspired by the Cus D’Amato and in a way represents its French variant. We dedicate it to Michel Eyquem de Montaigne, born in 1533.

Mario Kappes’ Cus D’Amato Mario Kappes’ Cus D’Amato is a very special drink for us. It is also the basis and inspiration for this mixed drink. On 6 March 2020, I had the idea of what a French version of a Cus D’Amato might look like. The starting point was the Elixir Combier, which reminded me of Strega. I replaced the base spirit scotch with armagnac and the raspberry syrup with cassis. As you can see, the recipe and the DNA of the Montaigne are virtually identical to the Cus D’Amato.

The naming was unclear and took a long time; just as Mario took a long time to find a suitable name for himself with Cus D’Amato, it was the same with me, and I also chose a person with whom I have a lot in common. It is Michel Eyquem de Montaigne, born in 1533. There is much that could be said about him, but I will confine myself to the essentials. He is considered the founder of the essay. His main work, named “Essais” after the French word essayer, which means “to try”, was the first significant philosophical work in the French language. This work was written between 1572 and 1592, and in it Michel de Montaigne describes a wide variety of things and gives free rein to his thoughts. He also describes his personal experiences and tries to fathom the human condition. He was sceptical about everything. Unlike other philosophical schools, there are no dogmas for him, no “this is how it is and no other way“, but rather a “this is how it could be, but it could also be different, because I’m not so sure“, because he was also sceptical about himself and his own knowledge and always ready to adapt it in the case of convincing arguments or new experiences.

Michel de Montaigne meets us in his writings as a questioner who searches for answers, but ultimately does not find them, and in the process also leaves us enough room for our own views and experiences. He outlines the problems he presents, formulating new questions in the process, and in doing so only elaborates on his findings to such an extent that the reader is thereby stimulated to think for himself, free of any dogmatic doctrines. Thus he begins a dialogue with us across space and time. [1] [3] His thoughts are still weighty even after almost five hundred years and have much to tell us about ourselves.

Michel de Montaigne was a sceptic, and in 1576 he had his motto, “Que sçay-je?”, “What do I know?“, engraved on a medal. This saying stands for his will to remain in doubt in order to seek the truth. The scales with completely equilibrated bowls symbolise balance and the difficulty of judgement. [4] [5-573] As an inscription, he chose the motto of Pyrrhon of Elis, the founder of the oldest sceptical school: ΕΠΕΧΩ – I abstain from judgement. [5-573] [6]

I can recommend everyone to take the time to read his Essais. In particular, I recommend to German-speaking readers the complete translation by Hans Stilett published by the Andere Bibliothek. It is well worth it. My father was very well-read. For him, this book was the best he had read in his life. Anyone who gets into it will be richly gifted. For me, too, it is one of the best three books I know, a book that I would not want to miss and that I would always want to have around me. By the way, the other two are John Ronald Reuel Tolkien’s works “The Silmarillion” and “The Lord of the Rings”.