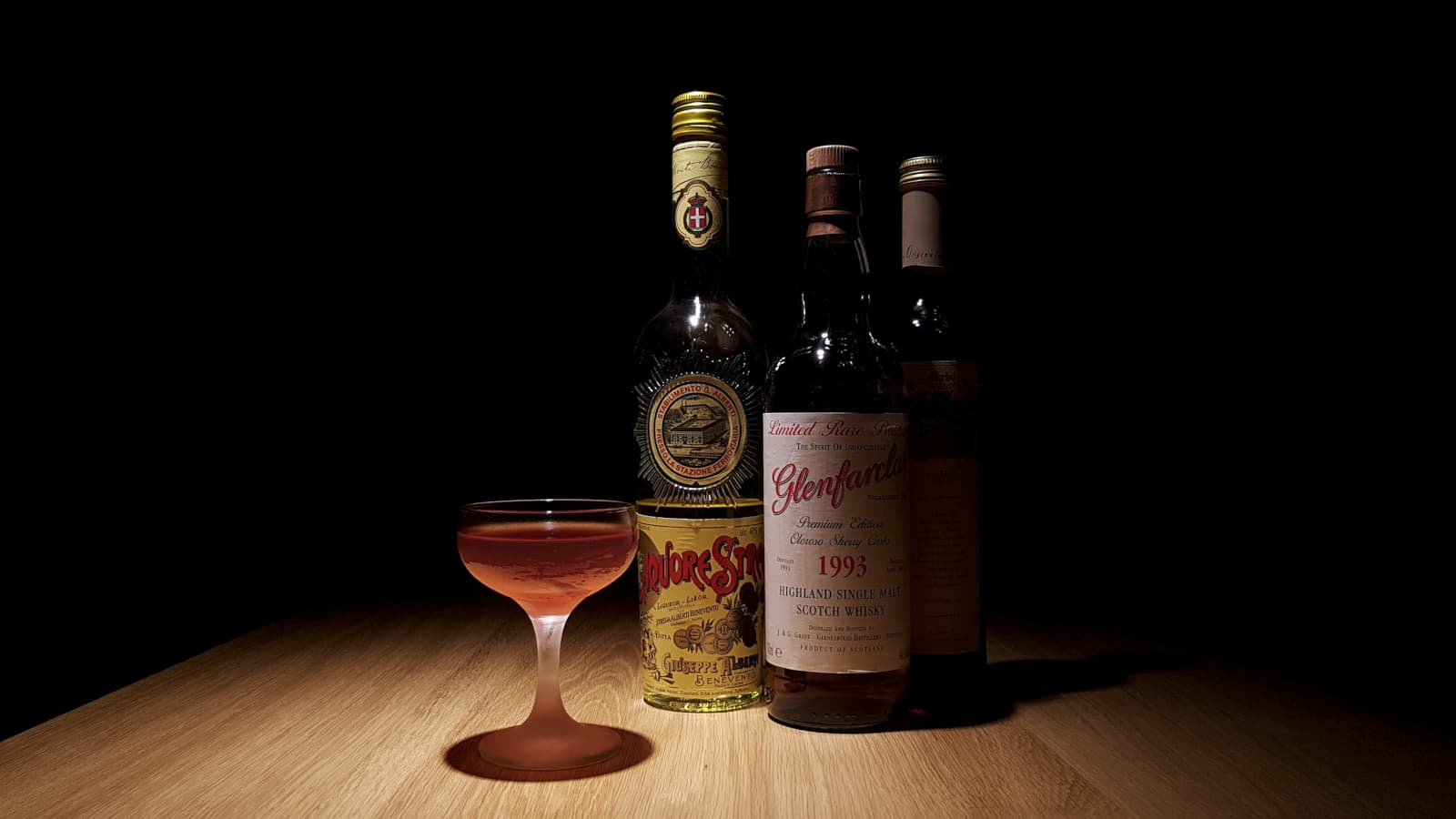 The Cus d’Amato is a drink that Mario Kappes created for a special moment with guests, as it also happened, for example, with the Professor Langnickel or Chocolate Wednesday. We still remember the evening when the drink saw the light of day.

We are regularly guests at Le Lion and so it was on 6 September 2014. On this Saturday evening, we were welcomed at the door by Mario Kappes and Bettina Kupsa guided us through the evening at the bar. Usually, our evenings at Le Lion have a theme that the drinks should follow. Usually it is spirits or a category of drinks, for example sherry, rum, chartreuse or Negroni. Since we also share each drink, we enjoy a rich menu with 6 to 8 different drinks.

On this evening, we had planned something unusual by our standards: Raspberry was to be the theme of the evening. Since this fruit is also occasionally used in old classics, we, as educational drinkers, naturally wanted to understand more precisely how variously this fruit can be used – gladly also in modern drinks – and were curious to see what menu sequence Betty would conjure up for us again this time. To say it right away: This evening’s menu consisted first of the Albemarle Fizz, followed by the Cosmopolitan 1934, the Clover Club, a drink without a name with Bacardi and champagne, the Knickerbocker, the East India, and finally the Cus D’Amato.

While we were enjoying our menu, Betty, as Mario told us later, went to his side and asked him which drink would be suitable for us to finish with. Since we like something like an Old Fashioned, but drinks with raspberries tend to be fresh, fruity and acidic, she was still looking for something suitable. So she asked Mario if he thought she could make something along the lines of rum Old Fashioned with a little raspberry. Mario did not answer.

We didn’t catch anything of this conversation and so, unlike Mario’s colleagues who were present, we didn’t notice how he stood around near the reservation book for ten to fifteen minutes lost in thought; as it was still early in the evening and not many guests were yet seeking admission, this was also possible without any problems. At some point, a taste had formed in his mind and he then approached Betty and asked if he may go behind the bar.

Sitting on our regular seats right at the bar, this question naturally caught our attention and we curiously followed what was to come next. A puzzled Betty replied that Mario was of course allowed behind the bar and why he was asking. Well, we watched as Mario unerringly mixed 2 cl of Strega with a bar spoonful of raspberry syrup – using only this small amount of raspberry syrup due to Betty’s suggestion towards an Old Fashioned. How he came up with this combination, Mario no longer knows. But it is quite possible that he had previously followed our discussion with Betty about what the theme of the evening should be. We had decided on raspberry, but Strega, among other things, was also a highly traded candidate. So it is quite possible that this conversation unconsciously triggered in him the inspiration to combine the two.

From his point of view, the two ingredients already worked, which we could also see from his satisfied face. But Mario had not yet found a potent partner. It was now very interesting for us to watch him think. You could literally see it working in his head as he stood behind the bar, lost in thought. It seemed like half an eternity. Finally, his eyes wandered over the backboard, he purposefully reached for a bottle of Glenfarclas, unerringly poured 6 cl of the contents into the mixing glass, stirred the drink and poured it into a cocktail glass.

As Mario told me later, he didn’t want to add rum because its aroma seemed too brute to him, since rum is quite overpowering and also has an underlying sweetness. However, two days earlier he had tasted Glenfarclas distilled in 1993, matured in oloroso casks and bottled in 2013, and came to the conclusion that its aromas were exactly what he wanted for this drink. Excitingly, the sherry that Mario loves plays its part here too.So we had watched Mario obviously doing something experimental here, but still had no idea what it was all about. The cocktail glass was handed to Betty. She tasted it. What happened was what Jörg Meyer also observed on himself a few days later:  „A mixture that makes you fall silent.“ – „Eine Mischung, die einen verstummen läßt.“ [1] So did Betty. The cup was passed on to Magdalena Karkosz: the same reaction, but the facial expressions spoke volumes. She was literally wide-eyed.

We were curious about this spectacle taking place before our eyes and cautiously asked if we could have a taste. This request of ours was immediately and firmly rejected with the remark that we would have to be patient, because this creation was our last drink.

Well, when we arrived at the last drink, we were very excited and immediately fascinated by this wonderful combination. A perfectly balanced drink, which at first seems a bit harmless, but Frank rightly remarked that it had “quite a bit of punch” – . „ganz schön Wumms“.

Unfortunately, we didn’t have any inspiration for the name of the drink that evening. Here, however, chance came to Mario’s rescue. For the first two or three days, the drink was still nameless. The first guest who had the pleasure of enjoying it after us said that the drink was “short and punchy”. Shortly afterwards, on a Tuesday, Mario was home in time to watch a documentary about Mike Tyson, the first part of which was very much aNun denn, beim letzten Drink angekommen waren wir sehr gespannt und augenblicklich fasziniert von dieser wundervollen Kombination. Ein perfekt ausgewogener Drink, der zunächst etwas harmlos daherkommt, doch Frank bemerkte ganz richtig, er habe dann doch „ganz schön Wumms“.bout his trainer, Constantine “Cus” D’Amato. The latter had discovered the thirteen-year-old Mike Tyson and taken him off the streets, let him move in with him and trained him for years so that he then became the youngest heavyweight world champion of all time at the age of twenty. Cus D’Amato, who invented and spread his own style of boxing and also acted as an advisor to boxing legends such as Muhammad Ali, unfortunately did not live to see this triumph, as he died eleven months earlier, on 4 November 1985. Anyone who has seen a Mike Tyson boxing match knows that he is not tall and has an incredibly hard punch. That’s sort of the subtitle to Mario’s drink – “short and punchy”. Mario then read a bit more about Cus D’Amato and things came full circle. In 1993, 14th Street in New York was renamed “Cus D’Amato Way”. Since the Glenfarclas used was distilled in 1993, Mario knew what his new drink should be called: Cus D’Amato. And a name entirely to Mario’s taste: “The name must be short, remain in the memory and arouse curiosity. And last but not least, tell a story with which you can start a conversation with the guest without talking about schnapps the whole evening.” –  „Der Name muss kurz sein, im Gedächtnis bleiben und neugierig machen. Und nicht zuletzt, eine Geschichte erzählen, mit der man mit dem Gast auch ein Gespräch beginnen kann, ohne den ganzen Abend über Schnaps zu reden.“ [6]

We were not even aware of what a rare moment we had been granted until recently. As Mario Kappes explained at his farewell event at Le Lion in February this year in connection with the Professor Langnickel, he very rarely created a drink ad hoc for a guest. Thank you, Mario, for making an exception for us and giving the world this drink. The Cus D’Amato is – as Mario rightly pointed out – the quintessence of what he has learned over the last 21 years, a perfect drink with no zest, no connector. At this farewell event, by the way, the Cus D’Amato was served as the last drink and the last bottle of Le Lion’s 1993 distilled Glenfarclas Oloroso was emptied.

Unfortunately, the 1996 distilled Glenfarclas Oloroso does not work in the Cus D’Amato like the 1993. So if you still have a bottle of the latter or can find one somewhere, preferably the 2013 bottling, you should definitely use it for the Cus D’Amato. It is worth it. Now, unfortunately, what Jörg Meyer already said in September 2014 is repeating itself: “A black day for drinking mankind. Mario Kappes has just served me a Cus D’Amato, … and now we find out, the whisky no longer exists! We were at the warehouse: out. We were at the dealer: gone.” – „Ein schwarzer Tag für die trinkende Menschheit. Mario Kappes hat mir gerade einen Cus D’Amato serviert, … und jetzt stellen wir fest, es gibt den Whisky nicht mehr! Wir waren im Lager: aus. Wir waren beim Händler: weg.“  [2] And he aptly states, “This is a world drink. … And it only works with this whiskey” – „Das ist ein Weltdrink. … Und der geht nur mit diesem Whiskey“ [2]

It might be difficult by now to find the “Glenfarclas Oloroso Sherry Cask” distilled in 1993 and bottled in 2013, but there is a remedy. A substitute has been found in Le Lion and now uses the twelve-year-old Glendronach. They have also prepared it there with the Compass Box Spice Tree. Both are good substitutes, but the result does not match the original flavour profile.

0 comments on “Cus D’Amato”