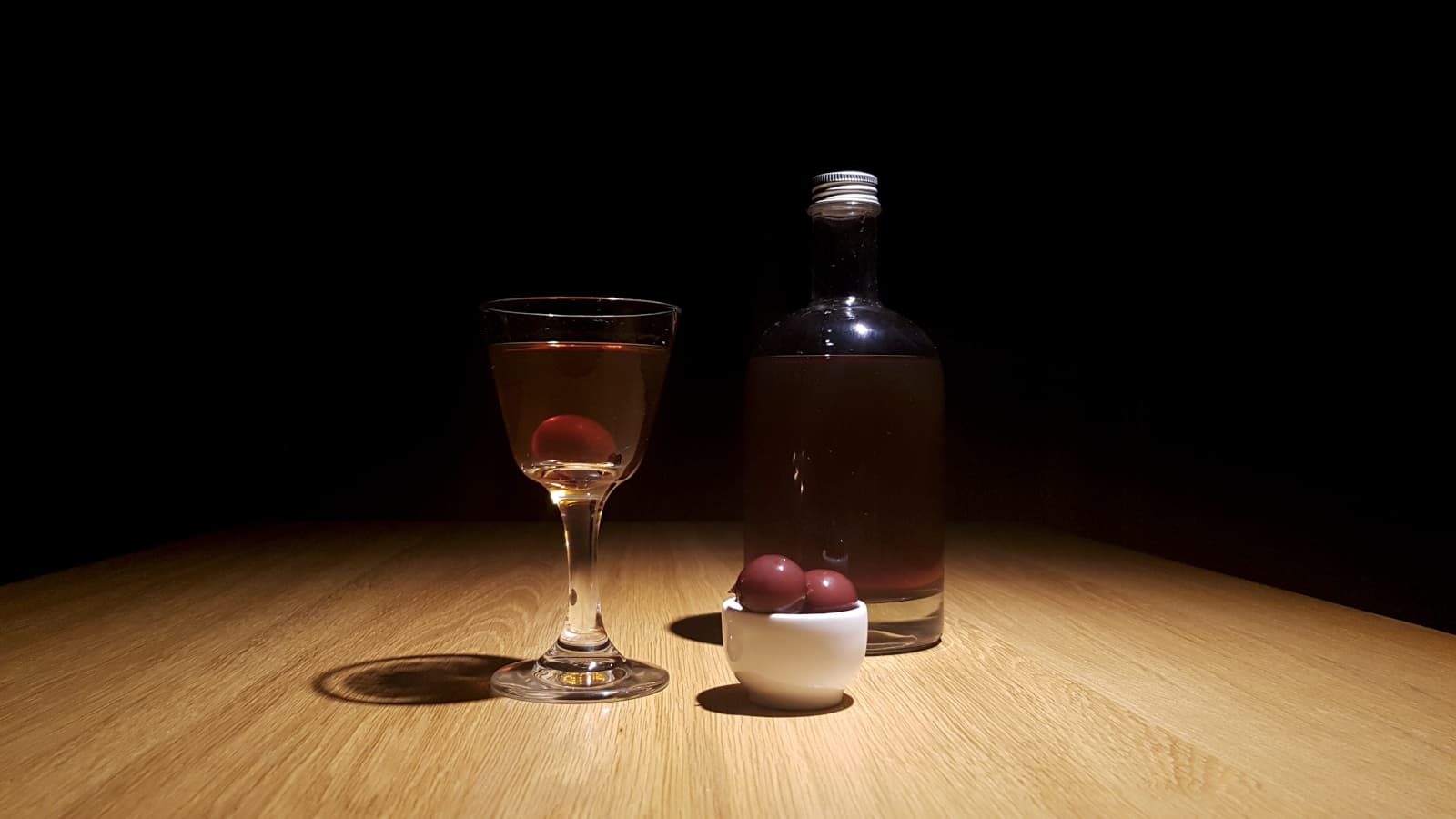 Are you looking for an ideal party drink that doesn’t have to be stirred on ice, is easy to prepare and is also extremely tasty? Try the “Föhr Manhattan”. You will certainly not be disappointed.

Preparation: Pour the ingredients into a bottle and chill in the fridge. Pour and garnish with a cocktail cherry. Done.

Note: If you like it a bit spicier, you can also use a rye whiskey, even if the result is then no longer a Manhattan as you get it served on Föhr. You could still deviate from the recipe by stirring with ice after all, for example because you don’t have the chilled mixture ready. This also tastes good, but it is no longer an original Föhr Manhattan. If you want a rye, the combination of Jack Daniels Rye, Moot Vermouth and Dolin Blanc is excellent. If it should be a bourbon, we like the Woodford Reserve Bourbon.

After the decline of whaling, hard times dawned on Föhr. Before that, most Dutch and English Greenlandermen were manned by island Frisians, and by the end of the 18th century, Föhr was home to around 1,000 seafarers, including 150 skippers. [1] But then this source of wealth fell away. Only agriculture remained and living conditions became poorer. As a result, there was a wave of emigration to the USA. Hundreds of Föhrers left their island. Many of them settled in New York City, and there is even talk of the “Frisian Connection”. When asked where they were emigrating to, the standard answer was that they were emigrating to New York because they didn’t know anyone in Hamburg. There were also people returning to the island from there, and they brought back the Manhattan Cocktail from New York. They had already drunk it in New York at Frisian gatherings, and soon the custom of Manhattan drinking became established on Föhr. [2] [4] [5] Practically every Föhrer has a ready-mixed Föhr Manhattan in his fridge, and pours it for every occasion, be it birthdays, holidays or Sundays. Or simply because the neighbour has dropped by to say hello. [5]

Christa and Ocke Bohn, 88 years old at the time of the interview, are quoted as an example of this habit. “Two bottles are always in our fridge,” they report, saying, “The liqueur tastes good and reminds us of America.” Ocke Bohn, born in the USA in 1929, came back to Föhr with his parents in 1945, then went back to New York in 1950 and stayed there until 1961, when he and his wife, who was from Föhr, ran a “New York Deli” on Long Island, where they always had fresh food, salads and sandwiches. Today, each of their visitors is served a Manhattan cocktail. “Quite normal on Föhr. What else are we supposed to offer? Tea, for example?” they say. [2] [4] [5]

Jan Robert Hinrichsen tells a similar story. In 1865, his great-great-grandfather Hinrich Cornelius emigrated to New York and returned 15 years later to bring back money. His son followed tradition and left Föhr in 1905 to work as a bartender in New York. Jan Hinrichsen’s father was born in the Bronx and the family returned to Föhr in 1959. “My father kept his American accent until he died,” Jan Hinrichsen said, and “he was always homesick for New York, but he was a Frisian at heart. I remember him saying that it was easier for a Frisian to feel welcome in New York than in Bavaria.” He also said, “This island survived hard years of whaling and farming, and drinking became part of our social fabric. From birth to death, it is part of who we are.” [4]

The Manhattan Cocktail is traditionally drunk on Föhr not only at every celebration, no matter how small. In the meantime, it has also developed into a successful business model. Around twenty years ago, it is reported, Jann-Oluf Arfsten filled 500 bottles of Manhattan Cocktail “just for fun“, as a mixture of Canadian whiskey, red Martini and white Martini. Today he sells around 6000 bottles a year and says: “On the island, everyone mixes their own Manhattan.” He is just the only one who bottles it in a beautiful bottle with a nice trademark. [2]

Jörg Meyer reported in an e-mail that Arne Lübcke, bar manager of the Boilerman Bar on Eppendorfer Weg in Hamburg, who comes from Föhr, as well as Sabine Soblik had told him years ago that people on Föhr have been drinking Manhattan cocktails for decades, and that this drink is THE drink for every island party. The classic Föhr Manhattan, says Arne Lübcke, is made from equal parts whiskey, red vermouth and white vermouth. Jörg Meyer writes: “Arne says a classic FÖHR MANHATTAN is simple: equal parts whiskey, red vermouth and white vermouth. Mixing vessel readily from 10 litres to bathtub. Rye was unknown on the island, Canadian Club was ‘too expensive’ at some point and since then they’ve been mixing bourbon for fun. And bright red chemical cherries.” [3]

I contacted Arne because I had a few more questions and didn’t want to report anything wrong, and he confirms: “I practically grew up with it. It’s always the same parts. Bourbon or Canadian is mostly used for the whiskey. With vermouth, no distinctions are made, the main thing is ‘Bianco and Rosso’. Then everything goes into the measuring cup and into the bottles and into the fridge. And there’s always a cocktail cherry to go with it. So you can get it in every household, even in the afternoon for coffee and cake, without ice and without stirring directly into the glass.” [6] When I asked him if rye whiskey was an acceptable ingredient, he replied that he thought it was good, but “you wouldn’t get it like that on the island“. [6]

What makes the Föhr Manhattan a unique version of the Manhattan cocktail? It is characterised by the fact that it combines “red vermouth” and “white vermouth” with bourbon or Canadian whiskey in equal parts. It is true that the idea of combining different vermouths in the Manhattan came about in the first decade of the 20th century at the latest. Louis Muckensturm gives a hint of this in 1906, interestingly also for a bottled Manhattan cocktail. However, his recipe differs from the Föhr Manhattan: [7-53]

Even after that, there are similar recipes again and again. What they have in common, however, is that they always use more whiskey, but not all three components in equal parts, and other components such as liqueur or bitters are also added. However, none of the recipes we found, which we have included as an appendix in our article on the Manhattan Cocktail, corresponds to a Föhr Manhattan.