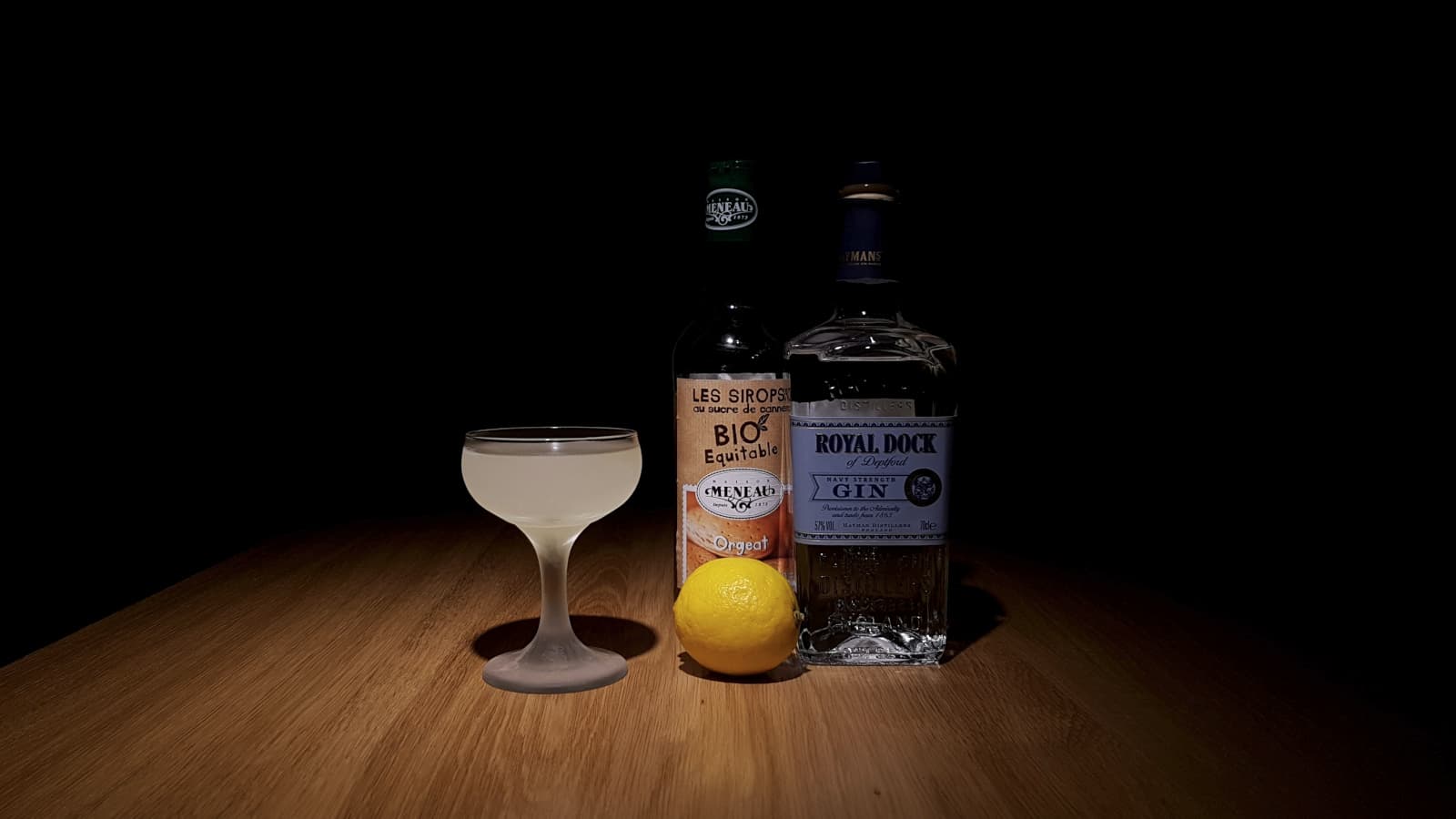 This is a gin sour sweetened with orgeat, which is unfortunately offered far too rarely. We think that should be changed.

The Army & Navy is basically nothing more than a gin sour in which the sugar syrup is replaced by orgeat.

The oldest recipe of this name that we could find dates back to 1930 in an American book, “The Drinks of Yesteryear” by Jere Sullivan. There, however, it is a rum sour with a little grenadine.

The first combination of gin, lemon juice and orgeat appears in 1933, in George Lurie’s “Here’s How”, with the name “Japanese No. 2”. The orgeat and also the name is a reference to the Japanese Cocktail. However, this variant uses too little lemon juice to be a sour, and is thus not an “Army & Navy” despite the same ingredients. “Peychaud’s Orgeat” from 1935 comes closer to it, but also contains Peychaud’s Bitter. In 1937, “Army And Navy” was published by R. de Fleury, but here, too, it is something else – a combination of gin, lemon juice, vermouth and bitters.

Where it got its name from can only be speculated. Presumably it was named after an “Army and Navy Club”. In Washington D.C., the “United Service Club” was founded in 1885 and renamed “The Army and Navy Club” in 1891. [5] It is said that this club gave the name to the drink because the daiquiri played an important role there. A dubious argument, since both mixed drinks, the Daiquiri and the Army & Navy, have no ingredient in common. The only thing they have in common is that both are a sour. [1] However, there has also been an “Army and Navy Club” in London since 1837, which was ranked among the best clubs in the world. [2-244] [4] Likewise, there was an “Army and Navy Club” in San Francisco. [3] The truth will probably not be found out.

For Army Generals 1/3 Bacardi Rum
and Navy Admirals. Dash of Grenadine
. Juice of half of lime
. A little sugar
. Shake and strain into cocktail glass.

Every day in Use mixing glass with ice; a good dash
Washington. of Grenadine Syrup; juice of whole lime;
. add a little water; mix well together with
. spoon; a drink of Bacardi Rum; stir
. again and strain into stem punch glass;
. and garnish with fruit.

1 part Lemon Juice
1 part Orgeat
2 parts Gin
I have given the original recipe which, to my mind, is horrible. If made
to my 1:2:8 formula, it is merely the Gin Sour (page 126) with orgeat
used in place of sugar syrup.

0 comments on “Army And Navy”