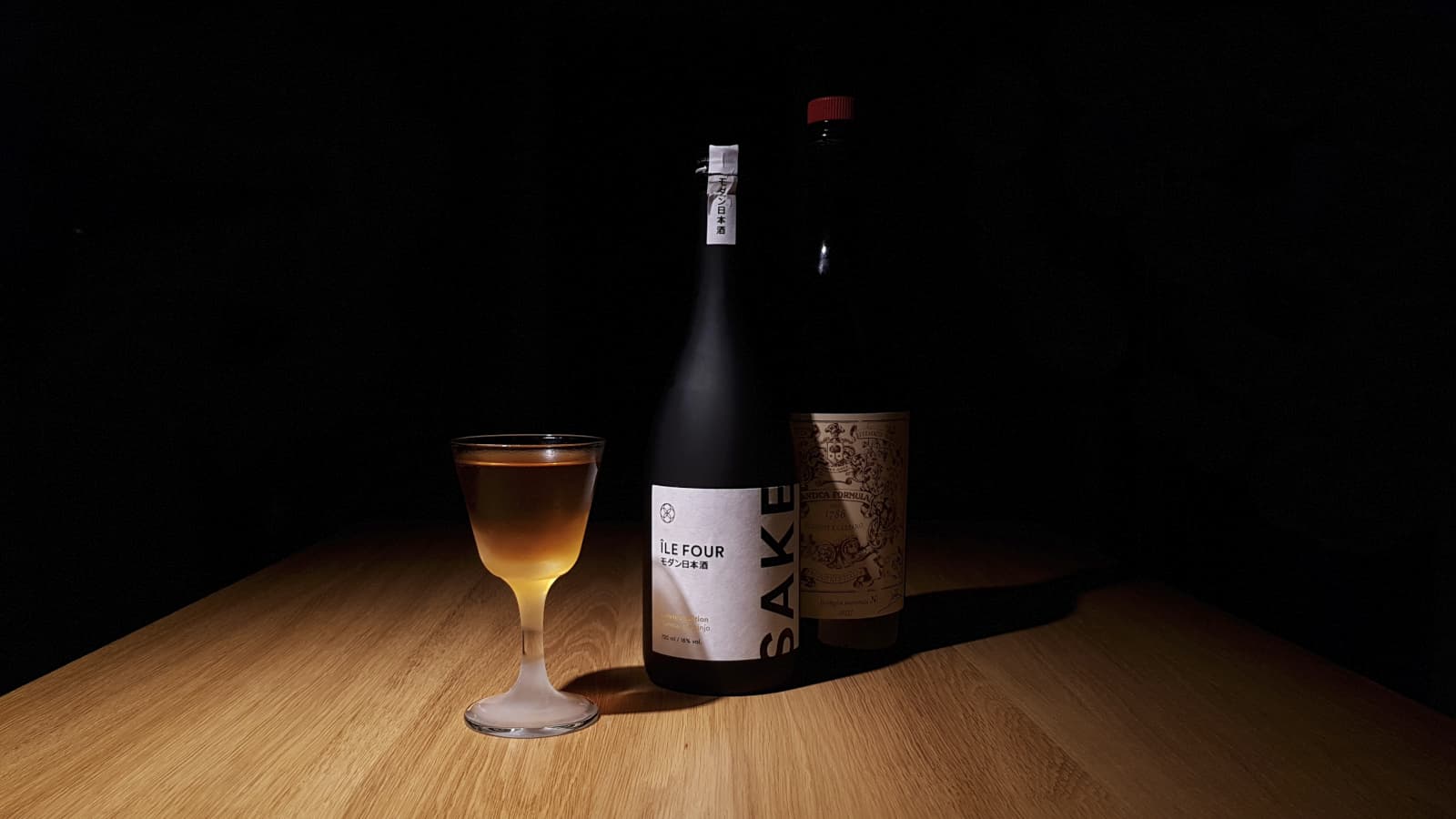 This is by far the oldest mixed drink with sake that we could find. A little gem, handed down in a small marginal note from 1927.


In 1927, Arthur Moss mentions a mixed drink called “Kleginite” in the appendix of Harry McElhone’s book “Barflies and Cocktails”, in which the Boulevardier Cocktail was also first published. So how is this Kleginite described and where does it come from? Arthur Moss writes: “That distinguished scientist, Richard Klegin, has evolved from his giant brain a real killer. “Kleginite,” this kamerafiend kalls it, and it’s potent enough to korrect even a Kleagle of the Ku Klux Klan. Simple, too: 1/2 Italian vermouth and 1/2 Japanese sake. Ain’t science wonderful?” [1]


A Kleagle is an officer of the Ku Klux Klan whose main task is to recruit new members. [16] Apart from the play on words involved in this description – after all, Kleginite sounds so much like Kleagle-nit – the uninitiated reader does not at first understand the whole dimension of this entry. What kind of camera-lover is this distinguished scientist, and what is Kleginite really all about? Kleginite seems to be something rare, for a search on the internet yields only two hits. One is Arthur Moss’ reference from Paris above, and then another is a three-year older article from the Chicago-based Radio Digest. [2] This article sheds light on many things:

– “New Death Ray “Expert” Sees Number of Streets on Sun; Cafe Is Laboratory – Former Manager of Negro Prizefighter Astonishes French Scientists with Claims — New Ray Called “Kleginite” — Ordinary Camera Using This Marvelous Invention Takes Photographs 30 Miles Distant“ – „PARIS. — One of the most bizarre byproducts of the “death ray” craze is the appearance in the limelight, in Paris, of a new “scientist,” one Richard Clegin, previously known chiefly as the former manager of Joe Gans, the negro prizefighter. Mr. Clegin’s office, in his own words, is at the Ritz bar, in Paris. From this point of vantage he has announced to Paris journalists the discovery of a new ray, hitherto quite unknown, which he has named “Kleginite.” With this marvelous invention Mr. Clegin announces that he can take photographs at a distance of 30 miles, with nothing but an ordinary camera — and one-tenth of one per cent of Kleginite — being necessary. A vest pocket kodak, says this extraordinary barroom wizard, is now the equal of the best telescopes known to scientists. With this new ray Mr. Clegin has made some pictures of the sun which he has shown to Paris astronomers. Some light streaks on these photographs are explained by the discoverer as being photographs of city streets on the sun; it being his idea that the sun is a cold planet, not too far away, and inhabited by folks who live much as we do on earth. No doubt there are even prizefighters among them. It is a curious credulity of the modern public that even such utter charlatanry as this does not lack for supporters and followers, even among writers for the press. Mr. Clegin has offered to bet one thousand dollars that he can kill an animal with his ray but no tests have been staged. M. Camille Flammarion, always willing to listen to any new idea, no matter how foolish it may seem to be, has offered to witness any desired demonstration of the marvelous Kleginite, but the inventor has not, as yet, shown any signs of accepting this offer.“ [2]


That really is one of the best bar stories of the century. But who knows, maybe there is some truth to it? Was Richard Klegin really an alien from the sun? How else could he have known that it was cold there, that there were roads and that people lived there? How else could he have known the Kleginite? Wasn’t he similar to Superman, who, as we all know, appeared in the 1930s, famously came from the planet Krypton, arrived on Earth in a spaceship, landed on the outskirts of Smallvilles in the American state of Kansas as a child and was raised by locals as their own son? And is Kleginite perhaps comparable to Kryptonite? [3]

This article from 1924 suggests that the mixed drink our article is about was probably not on the market in Paris in 1927, but probably a few years earlier. The Radio Digest article is a valuable source. Leaving all fabrications aside, the Kleginite is an invention of Richard Klegin. Both sources testify to this. In addition, a certain M. Camille Flammarion is mentioned. Who is he?

Nicolas Camille Flammarion was born in 1842 and died in 1925. He was a French astronomer, author of both popular scientific writings and fantastic stories, and the first president of the Société astronomique de France, the Astronomical Society of France, which he founded. In 1861, at the age of nineteen, he published “The Majority of Inhabited Worlds”. In it, he argued that life could exist not only on Earth but also on other planets in the solar system. So why not also on the sun, as Richard Klegin claimed, one might add with a wink. Camille Flammarion was of the opinion that the canals visible on Mars were built by a highly developed culture. [4]

Camille Flammarion’s grandson Léon Deloy was born in Paris in 1894, was a French sports shooter and radio amateur. He established the first two-way intercontinental radio link with Fred H. Schnell on 28 November 1923, between Nice in France and West Hartford in Connecticut in the USA.[5]

Finally, with this background information, the facts of the case slowly become clearer. We suspect that Richard Klegin and Nicolas Camille Flammarion knew each other and talked together over one or the other glass of a mixed drink, it may have been Kleginite, perhaps even in the Ritz Bar, about life on other worlds and other utopian things like magic rays. This is how the story of the Kleginite and the Dwellers of the Sun eventually came about. Léon Deloy may have been there, or received reports of it from his grandfather. They will certainly have been known in Paris, for Arthur Moss also hints at it when he writes about the “distinguished scientist” and camera friend Richard Klegin. Léon Deloy will probably have passed this fantastic story on to his radio comrades by radio, and so it eventually made it into Radio Digest.

The Radio Digest was a magazine published in Chicago since 1922 with programme information and industry news. So it’s nothing unusual to publish radio stories there as well. [6] [7] Radio and broadcasting were something new at the time. On 6 November 1919, the Dutch factory owner Hanso Schotanus à Steringa Idzerda broadcasted the first known radio programme from his private flat in The Hague. He broadcast his popular programme four days a week until 1924. In 1920, the first commercial radio station began regular operation in Pittsburg in the USA. In December 1920, a Christmas concert was broadcast by the Reichspost as the first German radio broadcast. [8]

But what else can be said about Richard Klegin, the apparent inventor or at least namesake of the Kleginite? Richard Klegin came from Sioux City in Iowa. He was the manager of Joe Gans (1874-1910), a US boxer and world lightweight champion who is considered by some to be the greatest lightweight boxer of all time. Richard Klegin was not only active in boxing but also in baseball. As president of the International Baseball League, he wanted to create an international baseball league in Europe in 1913. [9] [10] [11] [13] [14] He was considered a globetrotter and it was a mystery to many how he financed this. He probably did bad business often, but that didn’t seem to bother him much, because he was of a cheerful disposition. He also had a penchant for beautiful clothes. It was probably not uncommon that he did not always have enough money and probably did not always pay back all his debts – at least that is how it is portrayed in a newspaper article from 1921 that we found. He was still in the boxing business in that year and was well connected worldwide, with contacts in Paris, London, Saint Petersburg, Berlin, Vienna, Rome, Peking, Tokyo, Warsaw, Moscow and Athens. [12]

We have modified the recipe. The original calls for equal parts of sake and vermouth, but the proportions must be adjusted to the ingredients used so that they are in balance.

„That distinguished scientist, Richard Klegin, has evolved
from his giant brain a real killer. “Kleginite,” this kamera-
fiend calls it, and it’s potent enough to korrect even a
Kleagle of the Ku Klux Klan. Simple, too: 1/2 Italian
vermouth and 1/2 Japanese sake. Ain’t science wonderful?“