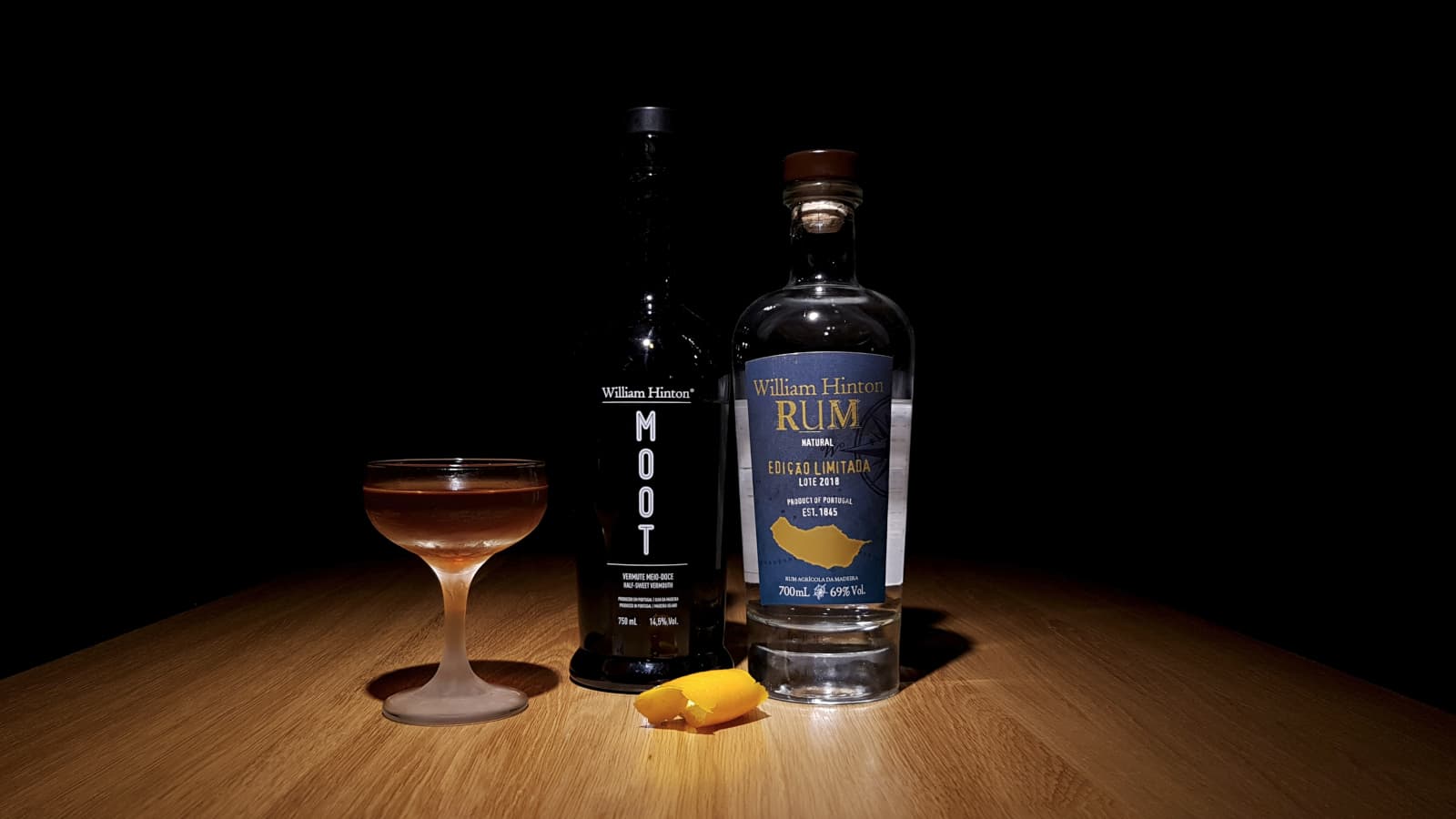 This rum Manhattan consists of Madeira rum and Madeira vermouth. A delicacy that does not have to hide.

This cocktail is actually nothing special – and then again it is. Nothing special, because it is basically nothing other than a rum Manhattan. The story of this cocktail will be told in more detail later. What makes it special is the unusually good combination of rum and vermouth. Both come from William Hinton from Madeira and fit together perfectly.

Rum from Madeira? That’s nothing unusual, because the first sugar cane mill was already there in 1425, [1] long before sugar cane was brought to the Caribbean. In the 19th century, many Englishmen were drawn to Madeira, including William Hinton, who opened a sugar cane factory in Funchal in 1845. A rum agricole was produced from the sugar cane juice obtained there until the 1980s. The distillery was closed at that time, and it was not until 2006 that the heirs started distilling rum again for the domestic market. [2] They produce numerous rums, all of which are good. But we were particularly taken with the “William Hinton Natural Fermentation”, the top product of the house. It is bottled at 69 vol% and ferments naturally, i.e. no yeast is added, but the yeasts in the surrounding air ensure fermentation. You can really taste the terroir here! 69 vol% sounds a lot, but the rum is easy to drink without burning, intense and spicy. To be honest: We did a comparative tasting, and we liked this rum better than anything we’ve tasted of Rhum Agricole from the Caribbean so far. That is saying something. Which is not to say, of course, that the latter are bad, quite the opposite.

We like to combine this rum with another product from the same house: with the “William Hinton Moot Vermouth”. This vermouth is also an absolute top product from our point of view. We like vermouths very much and have already tasted many (red) ones. They were delicious, but not as convincing in a mixed drink as we had hoped. So far, our standard product has always been Antica Formula. The Moot vermouth, on the other hand, is also convincing in mixed drinks. For example, it goes very well with peaty or smoky flavours like Scotch or Mezcal. The reason for its difference is certainly also the underlying wine: a wine from Madeira is used. So here, too, our absolute recommendation.

We got to know both products at the Bar Convent in Berlin in 2019. We came up with the idea of combining the two as a kind of Rum Manhattan on 6 December 2019. An additional bitter disturbs rather than enriches. However, one should definitely add the oils of an orange zest on top, which very delicately form a bond with the rest. It is perhaps unusual to use more than twice the amount of vermouth, but the rum is alcoholic and aromatic enough for this proportion. More of it would not be better.Every child needs a name, and here the decision was not difficult. We simply call it “Hinton’s Manhattan”.

By the way, anyone who wants to try the two products can order them from Lion Spirits.