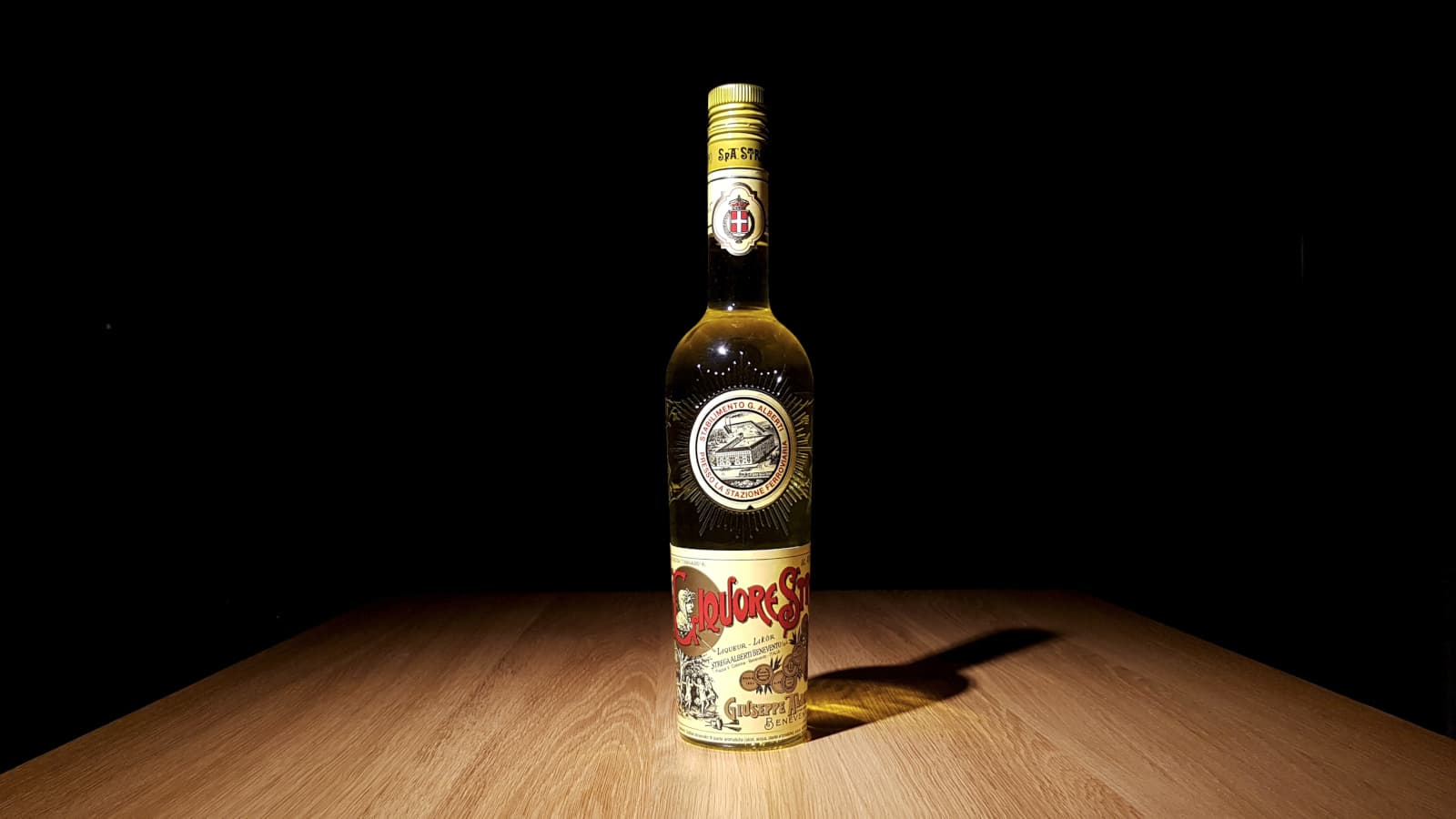 Whether or not Strega is a love potion created by witches from the Benevento area is anyone’s  guess. What is certain is that it is an integral part of some drinks. Reason enough to take a closer look at the herbal liqueur.

Guiseppe Alberti was born on 28 July 1834 in San Felice a Cancello in the province of Caserta in Campania. He moved to Benevento, the capital of Campania, in 1860, founded his company there in the same year, which is still family-owned today in the sixth generation, and began exporting wine from Puglia to France. Also in 1860, his liqueur “Strega” came onto the market.

The first factory building was occupied in 1861. Later he opened two bars, one in the main square, the other in the railway station. In the latter, his liqueur was sold to transients in small bottles. The liqueur soon became so successful that the wine trade was dispensed with. On 14 January 1894, Giuseppe Alberti died in Resina (Ercolaneo, where the ancient Herculameum is located), leaving behind his 4 sons Ugo, Vincenzo, Francesco and Luigi. [1] [3] [4]

The Strega recipe goes back to a centuries-old monastic liqueur made by the local monks. Guiseppe Alberti received the recipe from a monk of Santa Sofia in Benevento. [6] Santa Sofia is a small church on the outskirts of the old town. It was built in 760 under the Longobard Duke Arichis II as part of a central sanctuary and was under the care of a Benedictine monastery. Today it is a World Heritage Site. [5]

Giuseppe’s father, Carmine Vincenzo, was imprisoned nearby because of his revolutionary stance against the Bourbons. When he was released from prison, [1] [4] they both modified the monastery liqueur by adding some herbs and spices. The monastery liqueur had already been made for medicinal purposes before, and so Alberti sold his liqueur as “Alberti’s medicinal elixir”. However, the product could not be marketed well under this name. In the search for a new name, reference was made to an old local superstition, [6] according to which the surroundings of Benevento were inhabited by witches who held their magical rituals hidden in the surrounding mountains. [1]

Benevento has been known as the “city of witches” since the times of the Lombards. The invaders settled in the area, and although they had formally converted to Catholicism, they retained rites to honour Wotan. The local Christians combined these Lombard rites with their pre-existing ideas about witches, which probably dated back to Roman times, when the Egyptian deity Isis was worshipped. In their eyes, the Lombards were witches, the goat used in the rites was an incarnation of the devil, and the screams that occurred during the ritual were an expression of orgiastic rites practised by the Lombards during their coven. [2]

This is how the liqueur got the name “Strega”, which means “witch” in Italian. [3] [6] The marketing went perfectly and it was claimed that the liqueur contained the secret formula of a love potion. [6] Legends began to circulate as to where the magic formula came from. The most famous one says that Carmine and Giuseppe Alberti came across a group of witches in the woods around Benevento when they were holding their coven. Two of them were wandering around looking for herbs for their elixirs when suddenly thunder and lightning struck, a branch fell from a tree and hit one of the witches. Out of gratitude that the two saved the stricken witch, the remaining witches decided to give the two men the recipe of a special elixir as a gift, but they could not reveal it, either to family members or to anyone else, unless they were about to die. Only then could they pass the recipe on to their closest heir, the one who would continue the production of the elixir. [1] It is said that even today only one member of the Albertis’ family and the production manager, whose father and grandfather already worked for the company, know the exact composition of the liqueur. [1]

Over 70 herbs and spices form the basis of the liqueur. Among them are cinnamon, iris, juniper, mint, star anise, fennel, cloves and lavender. They are infused in alcohol. Then they are distilled in steam-heated stills. The liqueur matures in oak barrels until the flavours have married perfectly. Its yellow colour comes from the saffron. [1] [3]

In addition to the “normal” Strega, the “Strega Riserva” is also distributed, for which the classic Strega is matured in barrels for many years. The company also produces other products.[3]

It is surprising that Strega does not seem to have been used in historical recipes, although it has been on the market since 1860. The first use of it as a cocktail ingredient is found in the United Kingsdom Bartender’s Guild’s Approved Cocktails of 1937. There the “Ott’s Special” is listed, with the reference that it originated from Jack Powell. The drink consists of 2 dashes of orange bitters, 50% dry gin, 25% Strega and 25% French vermouth, garnished with an orange zest. Also published in 1937 is William Tarling’s “Cafe Royal Cocktail Book”. In addition to “Ott’s Special”, it also lists the drink “Georgia” invented by G. Munro, which consists of 1/3 Booth’s gin, 1/3 lemon juice, 1/6 sugar syrup and 1/6 Strega and some egg white. In 1940, Pedro Talavera publishes the “España Cocktail” in “Los secretos del cocktail”. In 1948, David Embury tells us that an Old Fashioned Cocktail can be varied with a dash of Strega. Strega is only used more frequently in the “Manual del bar” from 1964, where it is used in seven drinks.

Fortunately, this situation has changed in the meantime, because Strega is being used more and more. It is an integral part of many drinks and gives them their characteristic taste.