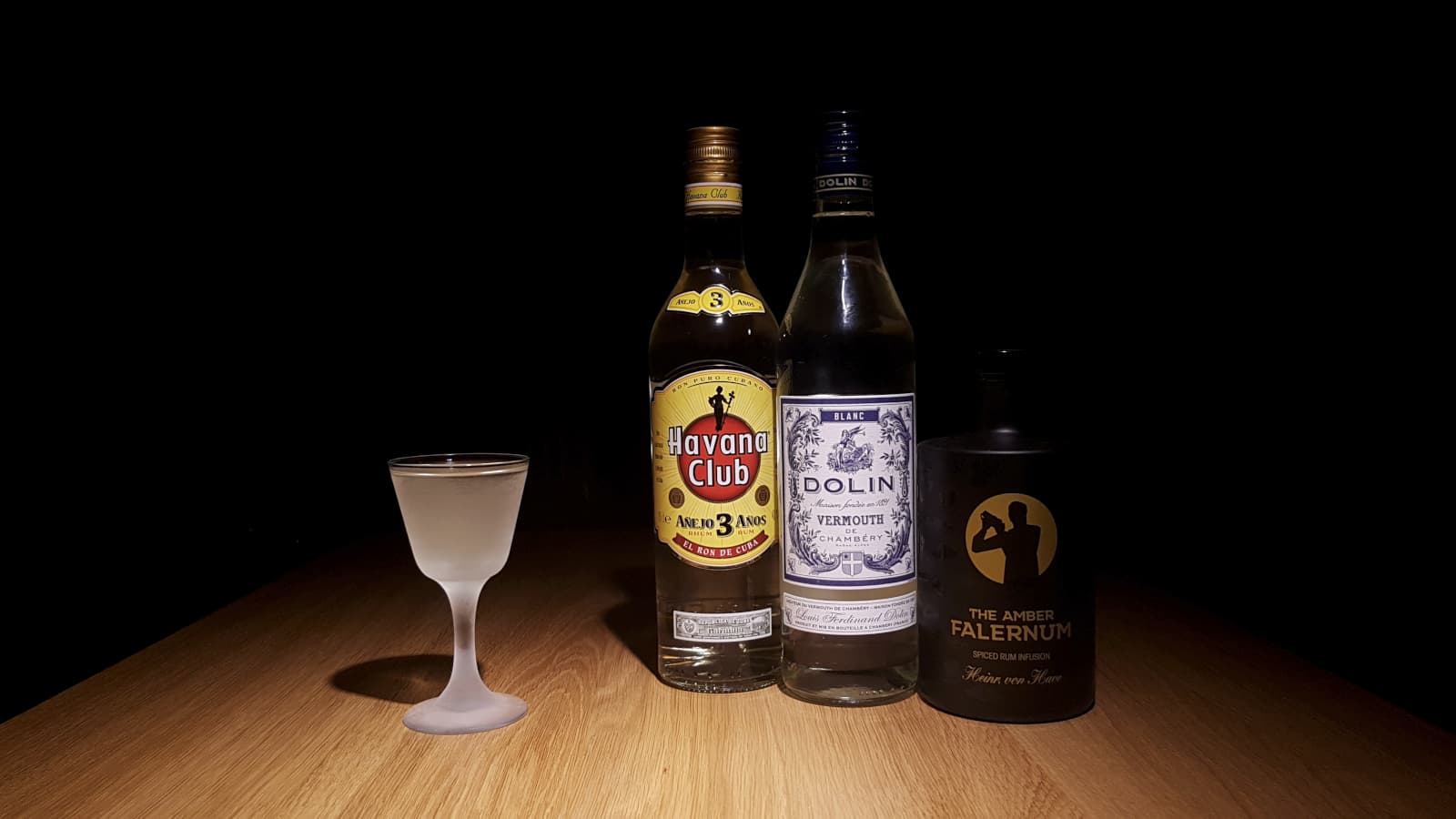 In this drink, the mild flavours of the rum and wormwood complement each other perfectly, and they leave enough room for the falernum to play the leading role in it. The result is subtle and refreshing, reminding us of a daiquiri, although of course it is something quite different.

While researching old books, we came across this drink. It was only published once, in 1951, in Charles H. Baker’s “The South American Gentleman’s Companion”:

THE GEORGETOWN CLUB COCKTAIL, which Is a SIMPLE YET
DEFINITELY INTERESTING MIX, from the CAPITAL CITY OF BRITISH GUIANA
Use bar-glass, not shaker. Into it turn 2 oz finest white rum avail-
able, like Cuban Bacardi, 3/4 pony Noilly Prat Dry French Vermouth,
and 1 tsp Falernum. Stir gently with lots of ice and strain into chilled
stemmed cocktail glass. Twist curl of orange peel over the finished
job for needed aroma; or lemon will do. You’ll like the subtle wed-
ding of the delicate rum with the Falernum flavoring and the bitter
herbing of dry vermouth. Use no bitters, this time. [7]


The Georgetown Club and the Swizzles

Not much can be found out about the history of the drink, only what Charles Baker tells us. According to this, the Georgetown Club Cocktail comes from Georgetown, the capital of Guyana. The name suggests that it comes from the Georgetown Club of the same name. Unfortunately, an enquiry at the club itself did not reveal any additional details.

In 1857, the “Assembly Rooms” were built in Georgetown. These were one of the most important venues for cultural activities until their destruction by fire in 1945. On the upper floor there was a convertible theatre and ballroom with space for 700 people. There were spacious verandas at the back of the hall, and so more than 1000 people could be received at events. On 12 February 1858, the building was opened with a public ball. [3]

The ground floor was home to the Georgetown Club, founded in 1858. Its members included leading planters, merchants and government officials. Business deals were negotiated there and political and administrative decisions were also made. Women, however, were specifically excluded from membership. The Georgetown Club was the aristocratic social centre. [1] [3] After the demolition of the Assembly Rooms, the Georgetown Club moved to Camp Street, where it remains today. [2]

The Georgetown Club was considered one of the best clubs in that part of the world, and was extremely hospitable to its visitors, who had to be introduced to the club by members. [4] A fine description of the club dates from 1883: [5]

The assembly rooms, where balls and parties on a large scale are given, is an unseemly building outside, but admirably adapted inside for the purposes for which it was erected. The balls are held in the upper flat, and wide and spacious galleries run along each side of it, where the non-dancing part of the company can promenade and flirt to their hearted content. These galleries are open to the breeze, which renders the room delightfully cool and pleasant. My friends in England will be surprised to learn that such a ball-room is more cool and pleasant than the close and confined rooms at home, and much more agreeable. There are no offensive smells from gas or a confined atmosphere. The bottom flat is occupied by the Georgetown Club. This Club is admirably conducted and is somewhat aristocratic in its pretensions, and exclusive. There is also another Club in Georgetown called the ” British Guyana” Club, which is not quite so aristocratic. Four others of recent date have been formed in the city. Nothing can exceed the kindness of the members of these Clubs to strangers. It is enough that you are a stranger in a strange land to command their hospitality; for the hospitality of the Demerarians is proverbial, and you must be on your guard against it, otherwise their swizzles, so pleasant and delightful to the taste, with which you are plied, may be too much for you. It is sufficient if you are acquainted with one member of the Club. Your friend takes you there, places your name in a visitors’ book, and introduces you all round to those present. Then begins your difficulty and your trial. Every one thinks he has a claim upon you to drink with him; and every one asks you. You wish to be civil, and you do your utmost to be civil and polite; but if you have a regard for your head and your sobriety, you feel yourself, at times, compelled to decline the proffered drink; and you are right. At the Georgetown and British Guyana Clubs you can have excellent lunches and dinners, but a stranger, although admitted to the Clubs, can order nothing — that must be done for him by a member, and he will never be at a loss on that score; and besides, he will never have to pay. [5-79] [5-80]

So we learn that one was served a swizzle. What is a swizzle, and how does it work in Georgetown’s climate? Henry Kirk tells us in 1898: [6]

There is great truth in the soldier’s remark that Demerara was a “ rare place where there’s lots of drink, and you’re always ’a dry.” The perpetual state of perspiration in which one lives in the colony creates a perpetual thirst, and I know no place where drinking is carried out on more scientific principles. The drink, sui generis, of the country is the swizzle. This subtle and delicious compound is sometimes ignominiously confounded with the cocktail, but though related, they are not identical. The cocktail is a stronger, shorter, and less sophisticated drink than the swizzle; there is no disguise about it; you know you are drinking something hot and strong, thinly disguised by the ice which cools without quenching its potency. But in the swizzle the potency is so skilfully veiled that the unsuspecting imbiber never discovers he is taking anything stronger than milk, until he finds that his head is going round, and that the road seems to be rising up and trying to slap him in the face. The ingredients of a swizzle are simple enough; a small glass of hollands, ditto of water, half a teaspoonful of Augostura bitters, a small quantity of syrup or powdered white sugar, with crushed ice ad libitum; this concoction is whipped up by a swizzle-stick twirled rapidly between the palms of the hands until the ice is melted, and the liquid is like foaming pink cream, to be swallowed at one draught and repeated quantum suff. This seems simple enough, but it is only one person in a hundred who can make a perfect swizzle; there must be a purity in the materials, an exactitude in the proportions, and a faculty for handling the swizzle-stick, which can only be acquired by long study and devoted attention. The swizzle-stick is cut in the forests from a small bush, which grows so that the shoots all radiate from a common centre; so that when cut and trimmed to a proper length, you have a stick about fourteen inches long, as thick as a pen-handle, with four or five short spurs about an inch long radiating from the end. These shrubs generally grow in sandy places, and are numerous enough, as an old colonist remarked one day when he and I were cutting swizzle-sticks, “See how good Providence is to provide us with swizzle-sticks in this thirsty country!” Whisky or brandy may be used instead of hollands for swizzles, according to the taste of the drinker. A swizzle is generally taken before breakfast and dinner; but pray remember that we get up at six o’clock, and work hard till ten, when we breakfast, and it is really not only a pleasant but a wholesome beverage. In Georgetown the sound of the swizzle-stick is heard all day; it is one of the common objects of the country, like those plagues the frogs and mosquitoes. There is no wrong without a remedy, and the soothing swizzle makes you forget the one and despise the other. The Georgetown Club is the headquarters of the perfect swizzle. [6-23] [6-24] [6-25]


The Swizzle and the Georgetown Club Cocktail

So we have to think of the Swizzle as a subtle, refreshing drink that is high in alcohol, but you don’t immediately notice its alcohol content. The Swizzle was ubiquitous and the best Swizzles were said to be at the Georgetown Club. We therefore think that the “Georgetown Club Cocktail” named after this club should be similar in style to a Swizzle, as this was apparently the way they preferred their drinks there, and what they were well known for. Alcoholic without being noticed, refreshing and leaving you wanting more. Similar to a cocktail, but without being a cocktail.

This succeeds with the right combination of ingredients. The recipe explicitly calls for “the best available white rum” and cites Cuban Bacardi as an example. So we have to use a light, not too flavourful, yet at the same time subtly delicate rum. Naturally, we chose the three-year-old Havana, which we also like to use in the daiquiri.

The French vermouth must not be too dominant, otherwise it would drown out the flavours of the rum, and it should take over the role of the cocktail bitter with its vermouth notes and combine subtly and harmoniously with the rum.

In our variant, we have doubled the proportion of falernum. Instead of a teaspoon, i.e. about 5 ml, we use 10 ml. This works very well for our variant. The sweetness of the drink becomes more pleasant, yet by no means too sweet. The falernum is given enough space to unfold. The result is very amazing and sensational for us. The mild flavours complement each other perfectly and the falerum notes are highlighted very well. With this drink, it is important that the rum and vermouth are not too dominant in order to leave enough room for the falernum. The use of a falernum suitable for this recipe is extremely important. The Amber Falernum from von Have is a perfect match.

We find the additional use of an orange or lemon zest disturbing in our combination and therefore do without it.

Our first association was that of a daiquiri: subtle rum aromas, extremely refreshing, the lime aromas of the Falernum clearly stand out, but are more subtle than in a daiquiri prepared with lime juice. The whole thing is then rounded off by the other spicy flavours of the falernum.

We believe that it really matters what ingredients are used to prepare this drink, otherwise it will not reach its full potential and can certainly produce quite horrible results. However, if it is prepared correctly, it is subtle and refreshing, and you want more of it and virtually can’t stop enjoying it. So one can certainly imagine refreshing oneself on the veranda of the Georgetown Club in hot Georgetown, without immediately feeling the alcohol content, and giving oneself over completely to the local hospitality.

THE GEORGETOWN CLUB COCKTAIL, which Is a SIMPLE YET
DEFINITELY INTERESTING MIX, from the CAPITAL CITY OF BRITISH GUIANA
Use bar-glass, not shaker. Into it turn 2 oz finest white rum avail-
able, like Cuban Bacardi, 3/4 pony Noilly Prat Dry French Vermouth,
and 1 tsp Falernum. Stir gently with lots of ice and strain into chilled
stemmed cocktail glass. Twist curl of orange peel over the finished
job for needed aroma; or lemon will do. You’ll like the subtle wed-
ding of the delicate rum with the Falernum flavoring and the bitter
herbing of dry vermouth. Use no bitters, this time.