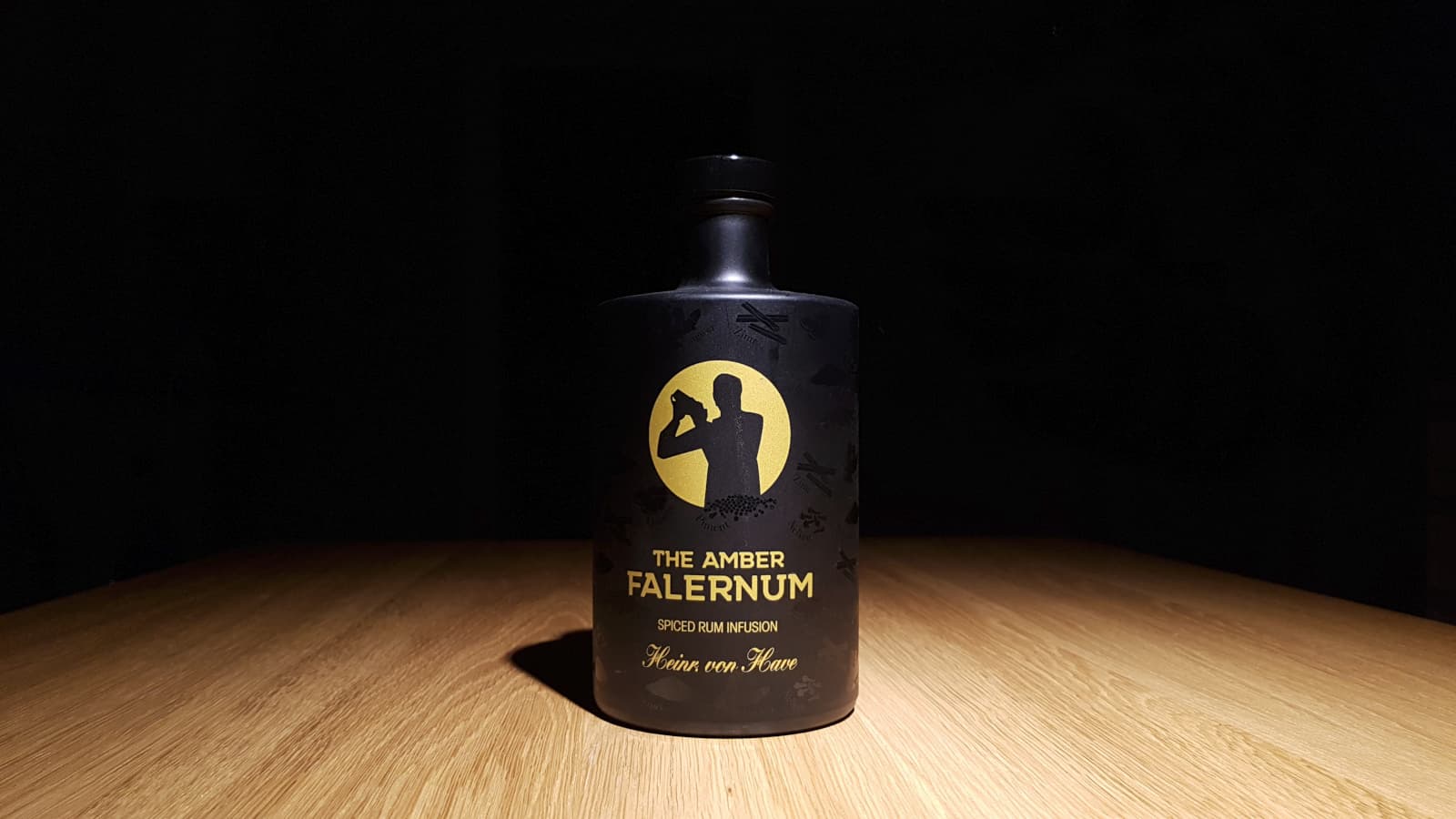 For a long time we were looking for a falernum similar to the one from Forgotten Flavours. This turned out to be quite difficult, but we found it.

“There once was a time when two students made the best Falernum in the whole country. Unfortunately, those times are gone,” [1] this is how Matthias Friedlein begins his article on the Amber Falernum, referring to the Falernum from Forgotten Flavours. We felt the same way. We regretted that Forgotten Flavours Falernum was no longer available. We got to know it at Le Lion in Hamburg and they used the remaining stocks. For a long time we were looking for a similar falernum, but this turned out to be quite difficult. We found one.

Forgotten Flavors was a project by Torben Bonhöft and Philipp Jäckel. They had gone among the spirits producers in 2008 with the aim of making forgotten ingredients that were not available in Germany, or were only available in poor quality, available again. At the time, Torben was also a bartender at Hamburg’s Le Lion, Philipp a bartender in Braunschweig, and their product was well received and appreciated. [2] [3] [4] Both told back then: “In addition to Falernum, we also want to firmly establish Swedish Punch as a product. We have already taken the first steps in this direction, the products are currently in the following bars: Rum Trader, Lebensstern, Triobar, Kronenhalle Zurich, Le Lion, Schumann’s Munich, River Kasematten, Rubinrot. We also have enquiries from Milk and Honey New York and Barfly Cologne, the packages will be on their way soon. So we are already beyond a test phase. We started about 9 months ago. The idea of producing our own Falernum and Swedish Punch came about because we were not satisfied with the Falernums on the market and Swedish Punch is no longer available at all. To close these gaps, we decided to develop our own recipes in order to end up with products that meet our standards. In our home bars, we prepared our first blends and refined them more and more. After this first phase, we also sought the advice of various bartenders to improve the products even further. Our claim to deliver the best quality has remained our top priority. Every lime is grated and squeezed by hand, almonds are roasted by ourselves, etc. … We think there is definitely still room in the bars for our Falernum, as it is the only one with a more complex, multi-layered flavour profile and without too much superficial sweetness with an intense clove aroma. Our Falernum is characterised by the stronger rum note combined with freshness from lime peel and juice, multi-layered from various spices.” [2]

Forgotten Flavors’ Falernum was no longer available for a long time, and the idea came up to relaunch it under the brand name “Tabula Rasa”. When we heard that Torben’s Falernum was going to be available again, we were really looking forward to it, but unfortunately, for various reasons, nothing came of this idea. We were very disappointed.

But then a small surprise package reached us. Heinrich von Have had received a tip to send us a bottle of their Amber Falernum. We tasted it and were immediately very taken with it. As it turned out during our research, it was no wonder. Torben had been looking for a producer for his Falernum, and so the recipe came to Heinrich von Have. There it was modified a little in cooperation with Torben, and now the Falernum is available as “Amber Falernum”. [5] We have been waiting for this product for a long time, and we would definitely like to recommend it to you!

The Falernum combines Caribbean rum matured in oak barrels with clove, allspice, cinnamon, ginger and lime and is bottled with an alcohol content of 17 vol%. [1] [6]

We like this combination very much. The sweetness is subtle, you can clearly taste fresh lime flavours, in which spice flavours are well integrated without being too much in the foreground. Almond is missing altogether, which we also note positively, because as our research on Falernum has shown, almonds are historically not one of the traditional ingredients of a Falernum. The alcohol content of 17 vol% is also fully in line with how a Falernum is classically understood: As a kind of rum punch: rum with sugar, lime and lots of water, rounded off with spices grown in the West Indies. Limes have been cultivated there since the end of the 15th century, ginger followed at the same time or a few decades later. Allspice was native there, cinnamon and cloves were first planted at the end of the 18th century. [8]

Finally, we would also like to write a few words about Heinrich von Have, because it is also interesting to learn by whom and with what understanding the Amber Falernum is produced.

The house in Große Straße, today Sachsentor 32, had been in the family since 1746. As it was better situated than the “Collosseum”, the business was moved there, and the farmhouse located there was demolished in 1899 and replaced by a new commercial building. The company’s shop is still there today. [9] [10] The “Collosseum” was sold in 1910, served as a cinema after the Second World War and was demolished in 1970. [10]

From the beginning, the company was a wine wholesaler, and at the beginning of the 20th century, they started to produce their own spirits and liqueurs. Since then, distilling has also been done in-house. [11]

The business grew, and so after 1920 the shop was extended out the back to include stores and garages for two delivery vans. [11] In 1954, a second modern winery was built in Rektor-Ritter-Straße to store larger quantities of wine. [12] Finally, Horst von Have, who had joined the company in 1960, launched a Rotspon from Hamburg with the approval of the Hamburg Senate, so that the tradition of Rotspon, i.e. the ageing of a French red wine in a northern German Hanseatic city, which goes back to the 13th century, could be continued. [13] [16] [17]

Even today, spirits are still produced by hand in the traditional way at von Have. This means that they can also offer high-quality spirits from their own production. [16] During a very interesting guided tour, we were able to see for ourselves how much handwork and love for the product goes into making the individual products. It is nice when, away from mass production, there are still manufactories where spirits and liqueurs are produced in the traditional way, with the aim of obtaining the best possible quality. It is also exemplary that there is close cooperation with bartenders in the development of products. Indeed, this has not only been the case with the Amber Falernum, but there is a product line of its own that has been created in collaboration with Uwe Christiansen, the owner of “Bar Christiansen”. [15]

We not only got to know and love the Amber Falernum. The other products we tasted were also of high quality, and we would like to recommend everyone to visit the shop themselves to taste and buy them there if they wish. There are some very nice products, for example a peach liqueur called “Peche Royal”, which is made from the brandy of ripe peaches and peach pits; a cherry brandy made from sour cherries, Black Forest kirsch from meadow orchards and cherry pit percolate; “L’ Esprit d’Orange” made from the distillate of fresh orange peel and cognac; “Mr. Sam Bucca’s White Coffee” made from wild aniseed and with fine coffee aromas; and a ginger liqueur made from Batavia Arrak, which knows how to convince with its ginger spice wonderfully surrounded by rose aromas. We also enjoyed the Advocaat egg liqueur with Black Forest kirsch from meadow orchards and a little vanilla.

Of course, we couldn’t taste all of the company’s own products, but there are other liqueurs, gin, rum, clear and bitter, whisky and vodka. So if you’re looking for an artisanal product away from the mass-produced goods, you’re sure to find what you’re looking for here.