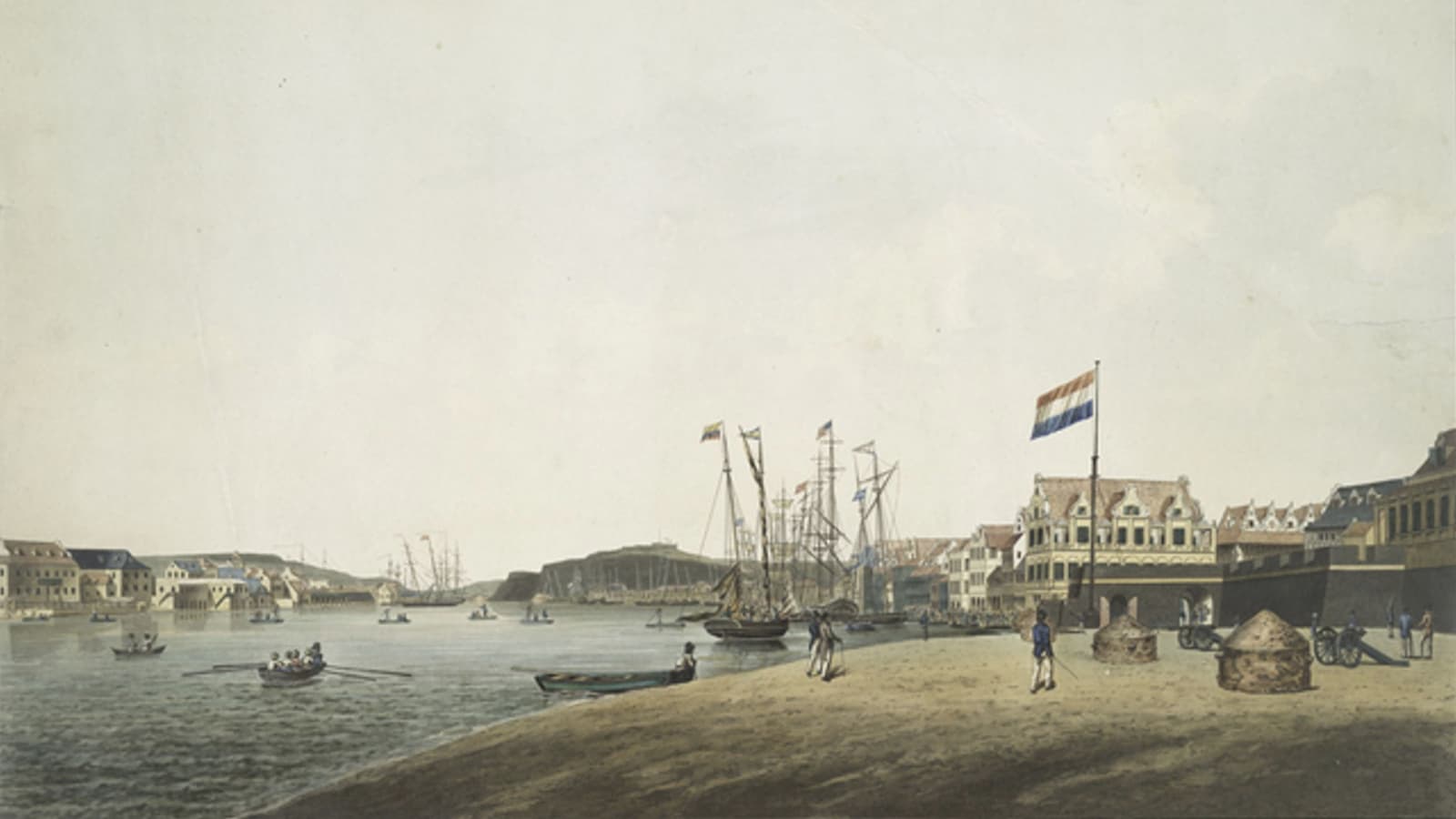 In this series of articles, we look at the Curaçao liqueur. Where is its origin and how was it made? This and many other questions that arise in connection with this liqueur will be addressed and answered with the help of historical sources.

In this series of articles, we will look at Curaçao liqueur. It is divided into several parts. For the sake of clarity, we will give you a brief overview of the structure:

First, we deal with the island of the same name, then with the orange of the same name and its peels. Then we will go into the spirit in general and look at how long it has been known. Before we then examine what a curaçao was for the distiller Pierre Duplais in 1855, we need to get an idea of what liqueurs were coloured with, and to do this we turn in particular to the Paris Food Ordinance. With this knowledge, we can turn to the recipes noted before 1855 to understand if there are differences. We have to go far back in time, as comparable spirits and liqueurs can be traced as early as the 15th century, even if they were not yet called curaçao. Finally, we are interested in the question of whether recipes printed after 1855 differ from those of Pierre Duplais.

Join us now on this exciting journey into the past, with many new things to discover along the way.

Part 1 – The island of Curaçao

Curaçao is about 444 square kilometres in size, is today part of the Kingdom of the Netherlands and belongs to the islands of the Lesser Antilles, not far from the South American continent. Spaniards reached the island in 1499 and named it “Islas de los Gigantes“, “Island of the Giants“, because the Arawak living there were tall. A few years later they deported all the indigenous people and forced them to do slave labour on the mainland. It was not until 1527 that the Spanish began to repopulate the island, which was conquered by the Dutch in 1634. [3] [4]

The goods of the island

So what do historical sources tell us about the island’s economy, also in connection with the oranges we are interested in, which were named after this island?

In 1662, the Dutch translation of a French work about the Antilles was published, which had already appeared in 1658. [2] In it there is a chapter “Of the trees that grow in these islands, of which the fruit may be eaten.” [1-42] In it there is a section “Of the orange trees, pomegranate trees and lemon trees.” [1-43] In this section it is reported that there are two kinds of oranges in the islands, sweet and sour, and both are very tasty. [1-43]

So at that time, both sweet and sour oranges grew in the Antilles. It is not quite clear whether bitter oranges were meant by the latter. Unfortunately, the islands of Aruba, Curaçao or Bonaire are not mentioned in this book. They were probably too far away, even though they are counted as part of the Lesser Antilles, and were therefore not covered in the book.

An encyclopaedia from 1745 writes about Curaçao: “The rich merchants have built sugar-boiling houses there, where otherwise there were huts for the cattle. There are also plantations for potstoes and yams. A lot of cattle can be seen there. In the meantime, the island is not so highly esteemed because of what it produces, as that it lies in a favourable position to do business with the Spaniards. Every year, large ships loaded with European goods are sent there from Holland, and they make a very happy return journey.” [7-2047]

Oranges are not mentioned, rather it is stated that the island’s products are to be considered unimportant.

Also in 1778, no oranges from Curaçao are mentioned in a report on the West Indies. About the Bay of Honduras it only says: “All the rest, which besides takes in the wood of the best kind, is loaded by the Dutch, who bring the Cutters linen, cottons, cordage, powder and ball, swords, strong liquors, wine, refined sugar, earthen ware, &c. from Curacao; and as they sell all these cheaper than the goods imported from Jamaica, those articles only remain for the English which the Dutch cannot furnish, as salt, beef and butter, meal and bread of North America, some iron-ware &c.” [5-46] [5-47]

Strictly speaking, however, this statement only means that oranges from Curaçao were not traded in the immediate vicinity; perhaps they were nevertheless regularly shipped to Amsterdam, since the buyers of them were located there? But that does not seem to have been the case either, because further on in the book there is a detailed account of the island of Curaçao: “The island of CURAÇAO, which the sailors call “Curassow,” or “Curacoa,” is about 15 leagues long, and four or five broad in the middle. In 1634, the Dutch took it from the Spaniards, who had occupied it from the year 1627. The French in vain attempted to expel them in 1673 and in 1678; since thefe two fruitless attempts, their possession has not been disturbed by any people. The island, almoll every where rugged and stony, is barten and very badly watered; neither is its climate healthy or agreeable. There were formerly some tolerable good pastures where they bred a great number of cattle, but for a long time thefe have given place to the planting of sugar and tobacco, of which, however, they produce but a middling quantity. At present, it is asserted that the whole produce of the island would not maintain the inhabitants for 24 hours; but such is the regulation of the Dutch Government, that there is no place in the West-Indies where want is less felt than at Curaçao. Towards the S. W. extremity is a very fine town, with an excellent harbour, but of a very difficult access; when a vessel has once entered, its spacious bason affords every kind of conveniency and safety. A fortreds, build with great skill, and constantly kept in order, defends this harbour; it is called Fort Amsterdam, and gives its name so the town. Although Nature seems to have refused everything to this island, the Dutch have not only supplied by art all that it wanted but have even converted several deficiencies into advantages: so that, where one would naturally expect to meet with a poor and necessitous people without hardly any communication with their neighbours, we realliy find a ritch and well-peopled city, full of magazines of all kinds of merchandizes, and a harbour where ships not only anchor in perfect security, but where, by means of a variety of engines, they may be railed into convenient docks, careened with a surprifing quickness, and furnished with rigging of every sort, stores of all kinds, and even artillery if they want it. When Admiral Knowles attacked La Guayra and Porto Cabello, as we have already mentioned under the article of the Spanish Territories, the Dutch of Curaçao furnished the fleet with cables, ammunition, and even with men; so that the Admiral would have infallibly succeeded in his expedition, if the same motive, and the same mercantile principle, had not engaged them to furnish the Spaniards before-hand with a sufficient quantity of warlike stores to render our attempt abortive. Curaçao is become an immense magazine, where the Spaniards come in their boats to exchange their gold, silver, vanilla, cacao, cochineal, quinquina, hides, mules, &c. for Negroes, linnen, silk, India stuffs, spices, lace, ribbons, quicksilver, and iron and steel works. It is asserted, that the article of Negroes alone has yielded a million sterling in one year. These voyages, though continual, have not hindered a multitude of Dutch sloops from carrying on a contraband trade between their island and the bays of the Spanish main. The substituting register-ships to the galleons has of late slackened this double communication; but it cannot fail to recover its former vigour, as soon as the misfortune of a war hinders the Spanish Continent from being directly supplied with provisions and merchandizes. … On the two sides of Curaçao are two small islands, both belonging to the Dutch; that of ARUBA, 12 leagues to the West; and that of BUEN AIRE or BONAIRE, 14 leagues to the East: they are both uninhabited, and incapable of producing any thing; though the Dutch have a small fort with a few soldiers in the isle of Bonaire.” [5-91] [5-92] [5-93]

Since no Curaçao orange peels are mentioned in this report, we have to assume that they were not an important or large trade good. This is also confirmed by a report from 1857 about the island of Curaçao and the Curaçao orange peels. It says: “The Curassao apples, Citrus aurantium currasaviensis (also Curassavica aurantia), are small, are preserved with sugar, but are not an export article of any importance.” [6-138]

The island of Curaçao was an important Dutch trading post from 1634. Initially, cattle were kept on pastures, but these gave way to the cultivation of sugar cane and tobacco. However, these yielded only small amounts. It was also probably the case that the island could not really feed its own population, but was dependent on imports. Oranges were not mentioned as an export of the island, with one exception. In 1857 it was written that on Curaçao, Curaçao oranges were not an export article of concern.

Now that we can assess the situation on the island quite well, we will devote the next article to the Curaçao orange in more detail.

0 comments on “Curaçao, Part 1 – Introduction & The Island of Curaçao”