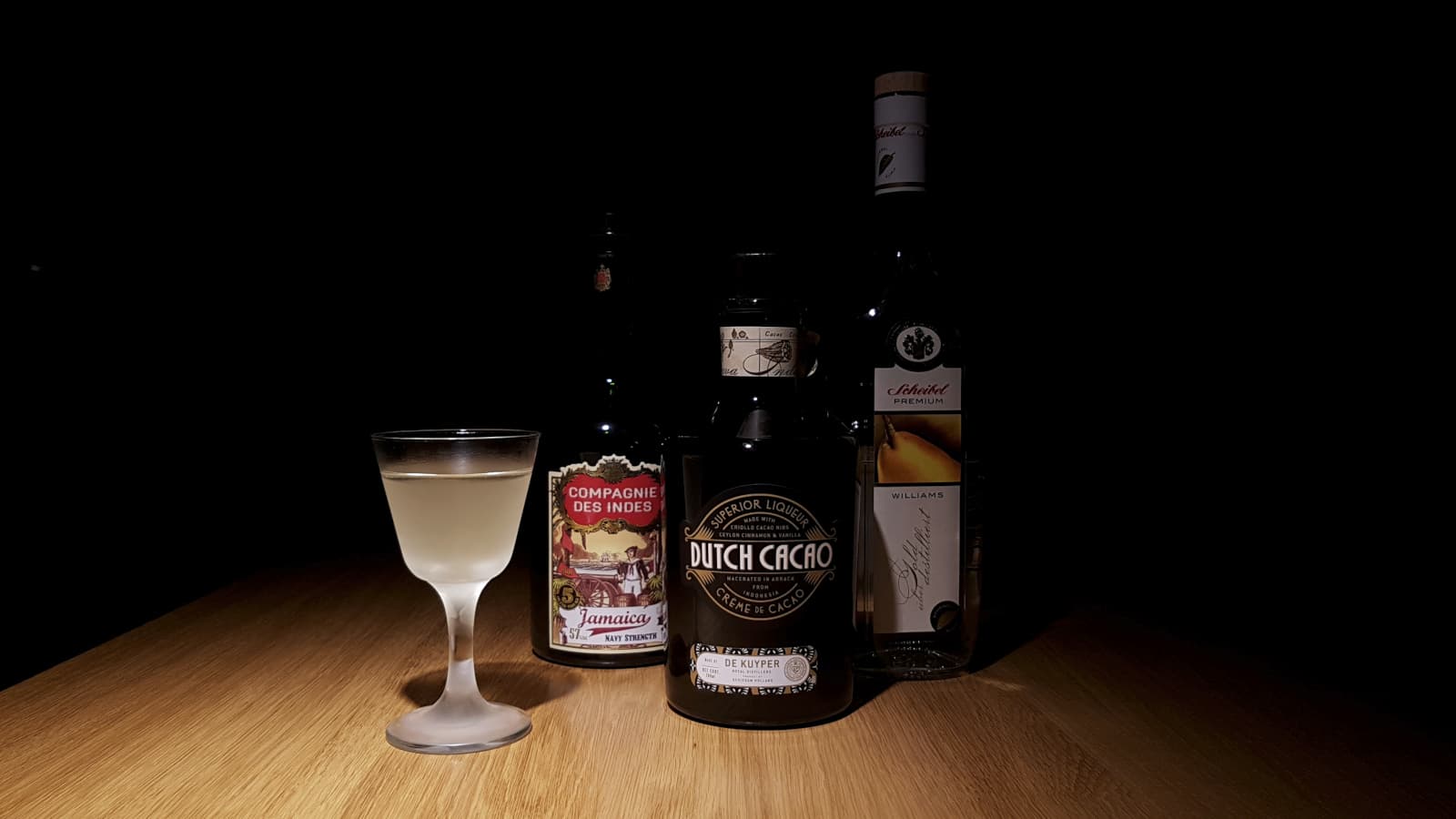 What could be better than pear with chocolate? Pear, chocolate and fruity Jamaican rum. This is our interpretation of a liquid pear Helene, a Poire belle Hélène.

From Jörg Meyer we received a bottle of his Dutch Cacao at this year’s BCB. We had already tried a few cocoa recipes with it and found it to be the best everywhere. Now, after a lot of cream drinks, we wondered on 18 October what else we could do with it. Frank Arne suggested a combination with pear, which I immediately associated with the classic “Poire belle Hélène”. Taking this as a basis, one would only have to add cream, but we didn’t feel like cream any more. Moreover, a classic “Poire belle Hélène” should not contain cream, but vanilla ice cream and candied violets, but I only discovered this a few days later during my research.

Then we thought about what else could be added. More pear didn’t seem so suitable. A fortified wine would be too sweet, because the Dutch Cacao brings enough sweetness with it. We quickly came up with rum and I immediately had Compagnie des Indes Jamaica Navy Strength in mind, which seemed to harmonise well with its fruity hints. So, no sooner said than done, we tried a blend of equal parts. Very favourite!

The name was chosen relatively quickly. A mixed drink called “Helene” already exists, as does “Belle Helene”. Besides, our mixture is not 100% comparable with the Poire belle Hélène, called “Birne Helene” in German, and would only awaken the wrong association in the person ordering it. But I immediately remembered the pear Helene scene with Loriot, where an apple with chocolate sauce is called a “Birne Helene” and a discussion ensues that this is not a pear Helene after all. I thought that there it was stated: “I still decide what is a Birne Helene in this house!” – “Was in diesem Hause eine Birne Helene ist, bestimme immer noch ich!“, and so we simply call this mixed drink “Le Loriot”, after the French name for the oriole, the heraldic animal of the von Bülow family, as a reminiscence of the Loriotic Birne Helene. Because we also determine what a Birne Helene is in our house, and that is this drink!

It is a fitting name. For one thing, it is a reminiscence of the Loriotic Birne Helene. For another, the oriole – which means “Le Loriot” – is a bird that also feels at home in native meadow orchards and in tall fruit trees, so why not in the pear tree? Among other things, it eats sweet fruit. Brehm’s Tierleben noted in 1882 that the oriole is popularly called “Vogel Bülow”. This family adopted the oriole as its heraldic animal because its call sounds like “büloo-büloo”. Vicco von Bülow, whom we hold in high esteem, in turn chose the French name as his stage name: Loriot. [1]