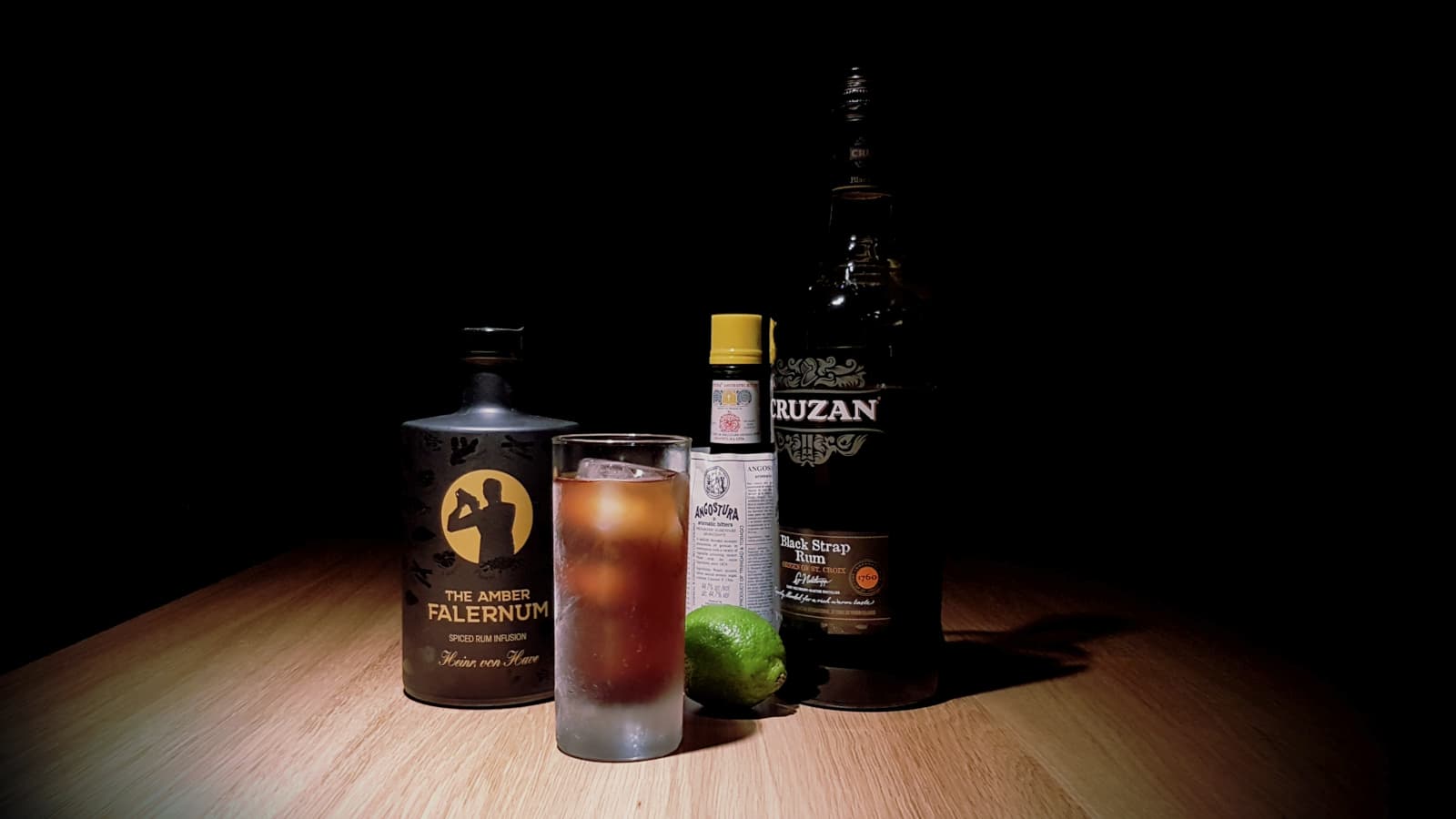 A traditional drink that Barbadian planters said drinking was like going to heaven without dying. For that reason alone, everyone should try it, especially Murray Stenson’s modern variation.

Preparation: Pour all ingredients into a highball glass filled with ice cubes and stir well.

The origin of this drink is obscure, and there are also numerous variations on the proportions. However, it is known that the Corn ‘n’ Oil originates from Barbados. It is part of Barbadian culture and uses falernum, a typical Barbadian ingredient. [1] It is also said to be obvious to use a Barbadian rum. We agree with this in principle. As a comparison has shown, the flavours are simply more consistent.

Murray Stenson, a bartender from the Zig Zig Café in Seattle, has modified the drink and given it a new direction by using Cruzan Black Strap from the Virgin Islands instead of a Barbadian rum. This rum, made from blackstrap molasses, which is a molasses with a low sugar content, is characterised by its rich molasses flavours, which seriously change the drink. Its version is now considered the modern standard version of Corn ‘n’ Oil, even if it differs from the traditional Barbadian recipe. [1]

Brad Thomas Parsons writes that at the Zig Zag Café in Seattle, where Murray Stenson popularised the Corn ‘n’ Oil, they add a small shot of Coca-Cola. [6-123] However, Coca-Cola is apparently not used by Murray Stenson himself, because Paul Clarke, a resident of Seattle, writes in 2005 about the Corn ‘n’ Oil: “This one comes from Murray Stenson, the aforementioned bartender extraordinaire from Zig Zag Cafe. In response to my falernum experiment, Murray suggested mixing a drink using Cruzan Blackstrap Rum, falernum, and the juice from a couple of lime wedges, over ice.” [7]


Where the name comes from and who invented the drink is not known. Literally translated, it means “corn and oil”. [2] However, we do know that the Corn ‘n’ Oil is an old drink. It has been around for at least more than 100 years. In 1911, Mrs. H. Graham Yearwood published her book “West Indian and Other Recipes”. She gives a recipe for falernum and the hint: „Rum and falernum constitute the drink known as Corn ‘n Oil or ‘Corning Oil’“. [4]

The drink seems to have been popular with the local population. Sir David Seale, the grandson of the founder of R.L. Seale & Co. Ltd. in Barbados, the maker of Velvet Falernum, recalls that in his childhood the planters said of their favourite drink, the Corn ‘n’ Oil, that it was like “going to heaven without dying“. They would have made it with equal parts rum and falernum. [3] This is an important clue, because we learn from it that the planters prepared the drink with somewhat less alcohol than some recipes suggest. There are recipes that use two parts rum to one part falernum. That’s how we tried it at first, but the result was somehow not yet round for us, which is why we chose an almost inverse ratio. The Amber Falernum is not overly sweet, so it is easy to drink. The falernum is in the foreground and is well supported by the additional rum. At the same time, this is not something we came up with. Traditionally, the drink was made with a lot of falernum, the recipe on the bottle of the Velvet Falernum even suggests 3 parts falernum to one part rum. [1] [5]